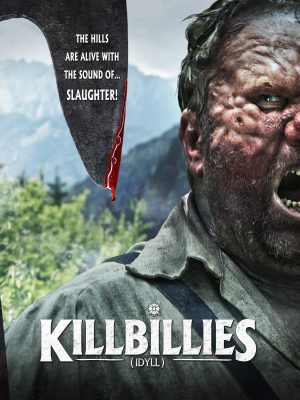 The chief novelty here is that Killbillies is Slovenia’s very first horror film.

It’s mostly just unpleasant and derivative, but it’s well-paced for the most part, has a fair amount of gore and suspense, and a doozy of a climactic shot.

Zina (Nina Ivanisin) is a jaded, aging fashion model who, after a night of drinking with the girls, heads out into the wilderness for a photo shoot. Annoying up-and-comer Mia (Nika Rozman), as well as Dragica (Manca Ogorevc) and photographer Blitcz (Sebastian Cavazza) are also along for the ride.

Before they know it, they’re attacked and abducted by some mutant hillbillies. Fairly typical torture and stalk-and-slash hijinks ensue.

The motivation behind the hillbillies’ behavior is actually an interesting if bizarre variation on the cannibal horror subgenre, it must be said. But the big problem here is that other than said torture scene, which is fairly effective if stereotypically depressing (well, it IS torture…), the threat here isn’t very strong.

The hillbillies themselves, while disgusting, aren’t overly scary. The abduction scene reminded me of the early scenes of the original Funny Games, wherein two unthreatening preppies overtake a family with a golf club. It pretty much killed Funny Games for me; this movie recovers a bit after the torture scene and makes up for the lack of threat with some decent, if occasionally pretentious, filmmaking.

The acting is fine throughout, but the make-up and effects are uneven. The score is properly unnerving, and the cinematography, while at times too dark, is effective.

There are some cool juxtapositions here; there’s a particularly nice cut from a nightmarish scene to a gorgeous, scenic shot of the beautiful mountains in the countryside, complete with pretty, soothing music.

The last half hour of the film is the most fun: mostly a prolonged chase through the woods. The heroine is crafty and resolved; however, points off for having another character attempt an escape while leaving a perfectly good weapon behind on the ground.

The movie doesn’t add up to much, and the climax reaches for meaning through random events, and it left me cold…until it’s followed by a slightly pretentious but terrific final shot. It’s a shot that would admittedly have been far more powerful if the rest of the film were nearly as good.

Still, kudos for not going for a clichéd, ineffective horror-flick ending and going for an oddly beautiful, poetic denouement.

Which is then cheapened by a mid-credits, low-key “gotcha”.

Killbillies is definitely a case of good-movie/mediocre-movie, but the good makes it worth a look for horror fans.

Killbillies arrives on DVD and VOD/Streaming on October 25, 2016