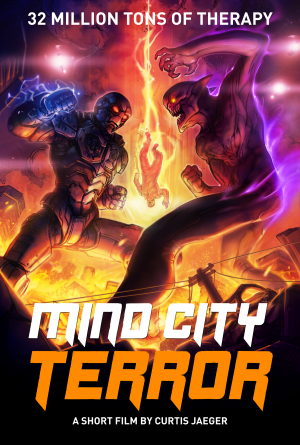 It’s shaping up to be an intriguing time for kaiju right now.

And I’m quite excited for Nacho Vigalondo’s Colossal, with Anne Hathaway and Jason Sudeikis discovering they have the inadvertent power – through their f’d-up psyches – to bring to life kaiju in Korea.  What they do with the knowledge of their incredibly destructive abilities forms the (potentially) tantalizing moral backbone of the story.

Meanwhile, his therapist may not have his best interests in mind…

Neat premise for a short film is executed well, with nifty special effects considering the budget, decent performances (though beware the mediocre maniacal laughing) and snappy pacing. The device of the bitchy ex is a very relatable but arguably tired one, and with zero backstory, it teeters on misogyny. It would have helped to see a “real-world” example of her behavior, other than the unreliable view of the “Mind City” version, wherein she’s just a horrible, obnoxious ball-buster.

I imagine Jaeger wanted to keep the tone relatively light, as opposed to exploring the mind of a seriously troubled young man, by focusing on someone who’s going through fairly typical angst. Or perhaps that’s the point?

It just seems that Jaeger and company could’ve taken things a step further: either make it much darker, or make the humor far more outrageous.

That being said, I would not rank this as a missed opportunity.  It still works as a pretty good, fairly impressive short film that displays promise in Jaeger and his cast and crew.

I’d actually love to see a sequel. Since Jaeger and the gang have shown they have the chops to complete a more-than-competent, entertaining film, why not go for broke next time? Really explore the premise to its hilt; maybe go for a wholly different tone…?

Regardless, Mind City Terror, for all its minor shortcomings, is a solid sci-fi short that’s more than worth a look.