I spend a lot of time these days, most often very, very late at night or very, very early in the morning on the couch in front of the TV thanks to a certain seven-week old child now dominating our lives. Whether it’s while feeding or soothing the boy, I’m always on the lookout for fun viewing and while there is a lot out there in the streaming world via Netflix, Amazon, Hulu, and so on… my favorite standby is YouTube.

I’m always a bit surprised what I end up finding there. I’ll say to myself… “Hey… remember that show? I wonder…” and there it is on YouTube. I can’t always speak to the legitimate rights to anything being broadcast on YouTube–particularly old television shows that are not in the public domain–but YouTube, despite cracking down here and there, still has a kind of “old internet Wild West” feel to it at times. 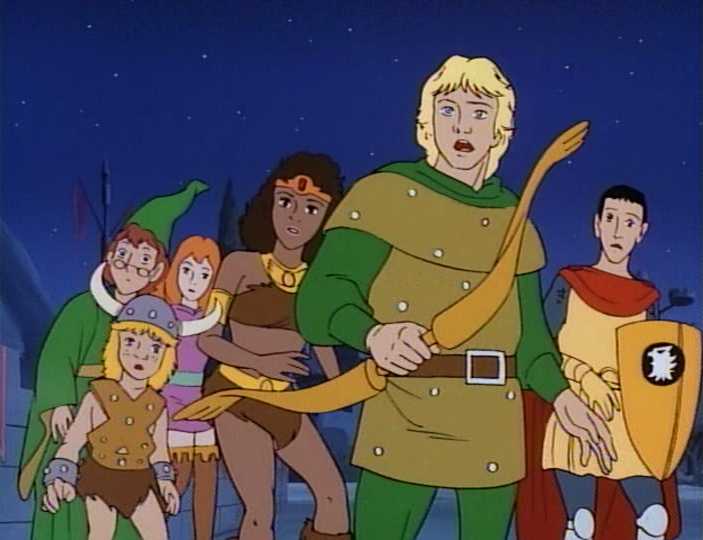 Back in the early 80s, Dungeons & Dragons was still a hugely geeky pastime that hadn’t really caught on with popular culture, so it was fairly surprising to see CBS broadcast an animated television series based on the nerdiest of all games of the time. It was a co-production of TSR with Marvel Productions, with animation by Toei Animation.

In short, it’s the story of a bunch of young teenagers (and a precocious tween) who find themselves magically transported to a fantasy world where they are meeting by a mysterious character who calls himself the Dungeon Master. They are each given a magical item which is associated with a D&D character class and must face various challenges and foes as they search for a way to get home. There were a lot of references to the game itself, but was accessible to any young viewer and, perhaps, some older viewers) who were not familiar with D&D.

The show lasted three seasons for a total of 27 episodes (plus one unproduced episode meant to set up a fourth season that never happened). The animation was pretty typical of the early 80s, i.e., not great, but the writing was surprisingly decent and viewing the episodes holds up well.

It’s a fun show for kids and adults who played D&D as kids, and they’re all on YouTube. You can find the first episode here: 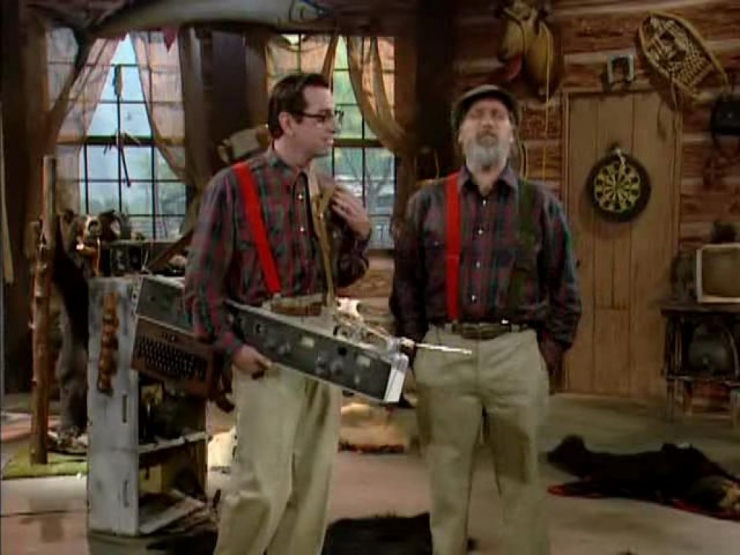 I love this show. I used to watch it regularly on my local PBS stations, and have a bunch on DVD. These days, however, I don’t play many disks. I don’t think I even have a DVD or Blu-ray player hooked up to anything. I was very pleased, however, to see there are a lot of episodes of this show readily available on YouTube, and seemingly with the permission of the rights holders.

So what is it?

The New Red Green Show (or more simply, The Red Green Show) is a Canadian television series that ran from 1991 to 2006 and starred Steve Smith as the titular “Red” Green who plays the host of the show and the head of the Possum Lodge, the main setting of the show. It’s pretty much a middle-aged guy show–jokes and skits about car repair, fishing, boating, wives, etc., but I know a number of women who also enjoy and watch the show on a regular basis. It’s not the most diverse of casts, so I hope if the show is ever revived that it becomes a bit more reflective of Canada’s population.

All that aside, it’s a fun, goofy little show that doesn’t take itself too seriously while often pretending to take itself seriously. It’s folksy, it’s charming, and it skewers things that are folksy, charming and “masculine”. The characters are great from explosives enthusiast Edgar K. B. “Kaboom!” Montrose (played by Academy Award nominee Graham Greene) to pathological liar Hap Shaughnessy (Gordon Pinsent) to notorious cheapskate Dalton Humphrey (Bob Bainborough). Assisting “Red” Green in his hosting duties is his nerdy nephew Harold played by Patrick McKenna.

There’s a reason the show has been a staple of public television for so long. The YouTube offerings display a link to redgreen.com where one can keep up on touring dates and buy merchandise.

It’s hard to say where to get started. You can start pretty much anywhere and enjoy the show. Take this episode from 1996, “Good Government”: 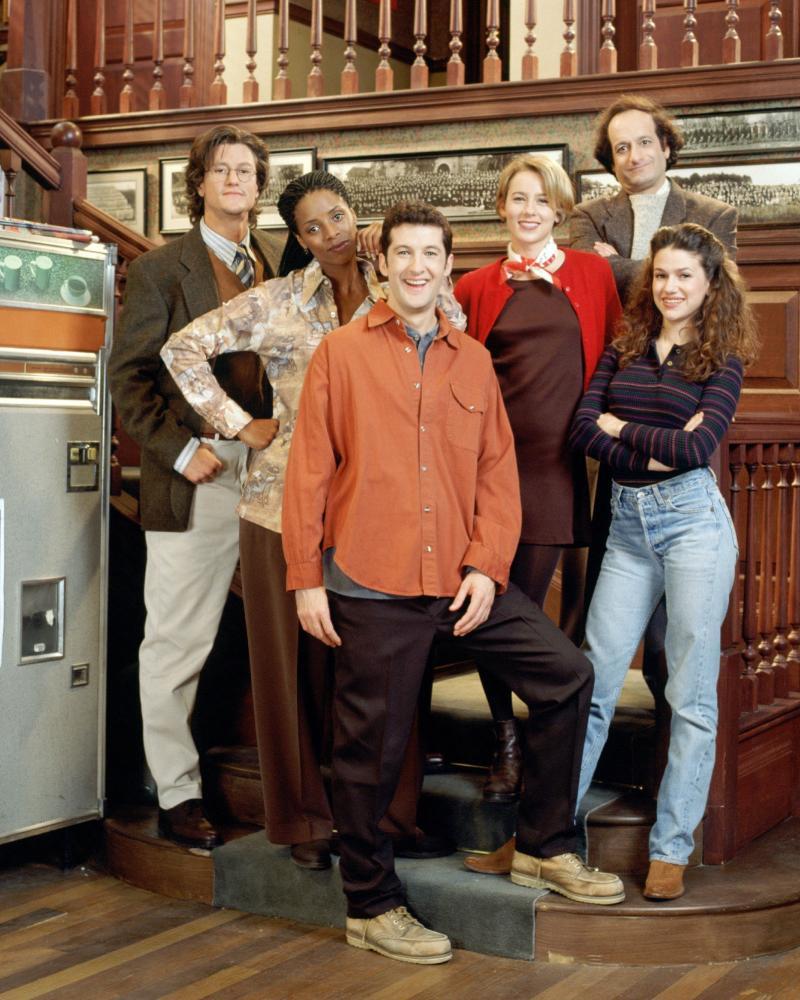 Ever wonder whatever happened to that show you liked “way back when” that just kind of up and disappeared? I have. Not every old TV show made it to a DVD set along the way. You’d be surprised what survives now that we’re in the digital age. Nothing is ever really lost. Case in point… Boston Common.

This was a fairly typical, by-the-numbers sitcom that ran for two seasons from 1996 to 1997. It starred stand-up comedian Anthony Clark who later went on to star in Yes, Dear for six seasons. In Boston Common, he plays Boyd Pritchett, a laid-back, friendly, and pleasant West Virginian man in his 20s who, after driving his younger sister Wyleen to a small liberal arts college in downtown Boston, gets a crush on a professor there and decides to stay.

There wasn’t anything really remarkable about the series, but I kind of dug the theme of the country mouse moving to one of the least friendly cities in the country. (Don’t get me wrong, I love Boston. Boston rocks. I was born in Boston… but it’s not exactly Happy Town.)

Anyway, I was made to remember this show recently and, sure enough, found both seasons sitting on YouTube. It was very much a product of its time, but it was still entertaining. There were some decent guest stars to keep an eye open for. That got me through a couple of nights with the baby.

You can catch the first episode here: 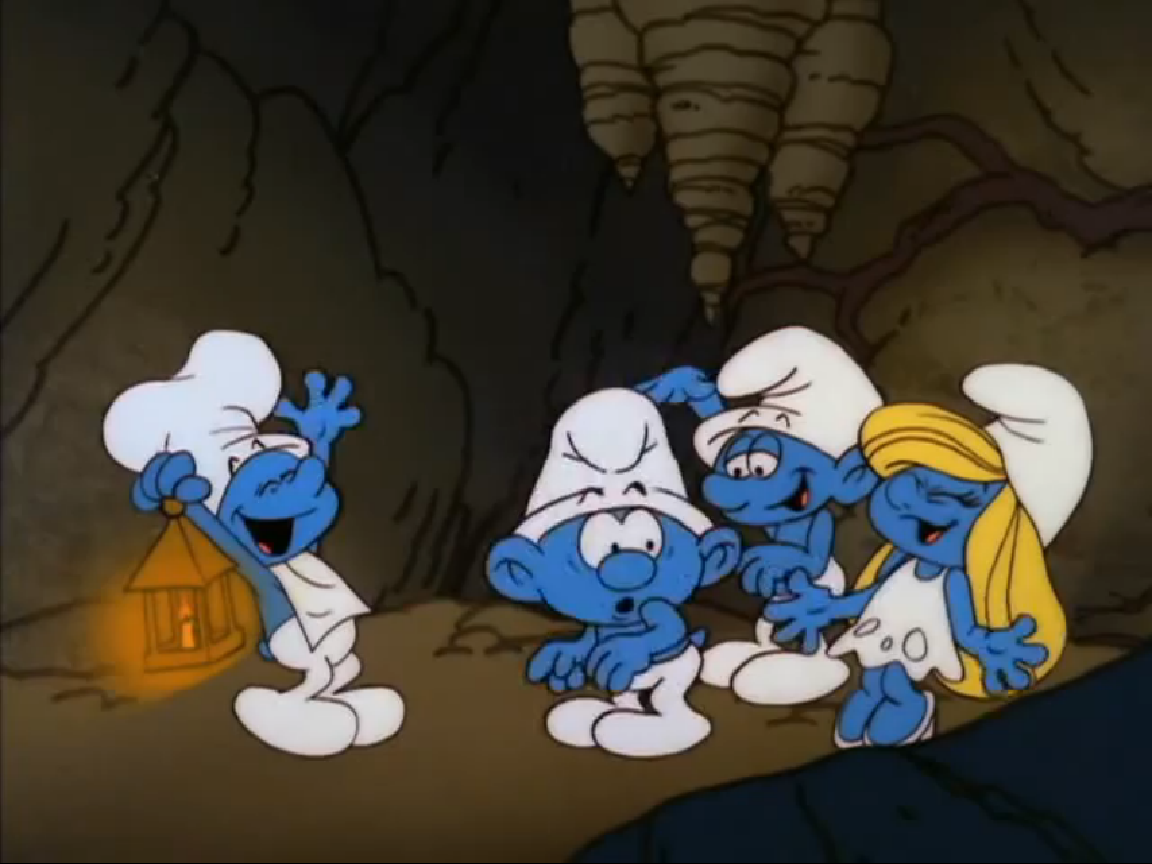 //Who doesn’t like these little blue fellows? Nobody, that’s who.

While I didn’t have much interest in the recent Smurf movies, I do occasionally revel in some nostalgia with the old Saturday morning cartoons. If you’ve been living on Mars or something for the past 35 years or so, the Smurfs are little blue people, about three apples high, who live in an agrarian collective in which their names dictate their place in society. It was very popular during the Reagan years. They are often harassed by an evil wizard with poor impulse control.

Even today it’s a charming little show. It’s great for kids. It’s still fun for adults. I was pleasantly surprised to find quite a number of episodes available on YouTube despite two fairly successful recent movies.

Here’s the episode “Jokey’s Medicine”. (Fun fact: Jokey Smurf was voiced by June Foray who also did such memorable voices as Rocky the Flying Squirrel and Granny from the Warner Bros. cartoons.) 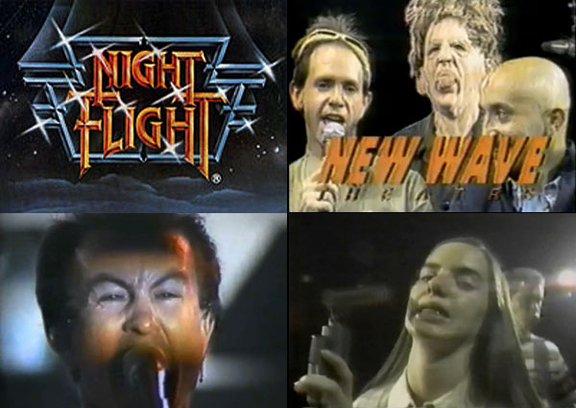 Who remembers Night Flight on the USA network in the early 80s?

Only my older readers, likely. Just the same, this is a fun show for music buffs from any generation. It was a locally produced LA show that was broadcast on UHF before moving to Night Flight and was hosted by Pete Ivers. It showcased a lot of new punk and new wave acts and was what introduced many people to bands such as Fear, the Circle Jerks, the Unknowns, the Waitresses, X, the Dead Kennedys, and others.

It was kind of a hit-or-miss experience as each band came on. Some went on to greatness, others disappeared into obscurity, but it provided a rather interesting and unique view into the LA music scene of the time.

It was shot as a live event and host Ivers is kind of charming, but awkward in his playing at being some kind of hip rebel. Sometimes it’s a bit cringe-worthy, as are some of the little skits and bumpers shown between music acts, but it’s still an interesting show and worth checking out (at least for a few episodes).

The 80s had a lot of lame, but underground there was some fun stuff happening.

The image and sound quality are far from the best. Remember, this was a low-budget UHF show filmed with live video. The YouTube versions probably came from a multi-generation VHS tape. Still, we’re glad to see it online and available. As for my seven-week baby, it’s the start of his musical education.

Here is the second episode which includes an appearance by Bad Religion:

There’s a lot more, of course. Old Dead End Kids movies, Charlie Chan and Sherlock Holmes movies, episodes of all three incarnations of Connections with James Burke, classic episodes of In Search Of starring Leonard Nimoy, and more. If you find yourself sitting up to all hours of the night and morning with a young child, or a flu, or the DTs, give some YouTubing a shot. Think of that obscure show you used to like and see if you can’t find it ready to stream.