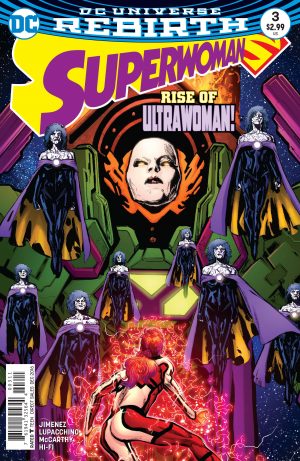 A few weeks back Lana was offered a job at The Daily Star by George Taylor. An attractive offer considering the offer of free reign to write about whatever she wanted and for a huge salary to go along with it.

With the rebuild of Steelworks in progress and Lana and John Henry Irons making a permanent move to Metropolis, Lana decides she’d be a fool to refuse it.

Now things have changed, Clark died and in doing so altered the body chemistry of Lois Lane and Lana giving them the ability to process sunlight into superpowers.

Lois and Lana started to fight the forces of evil as two Superwomen but recently Lois was killed and now Lana has to take the responsibility all on her own as the only Superwoman.

Today, during a parade in Metropolis, with the aid of the two Steels (secretly John and his niece Natasha) they take on the Atomic Skull. Lana is still new to her powers and using Atomic Skull’s output of radioactive powers she converts it into thermoelectric energy, pushing him closer and closer to death. John begs her to stop, Atomic Skull may be a dangerous villain, but he also knows secrets about John’s brother and the ever shady Lexcorp.

In the bowels of Lexcorp, Lex himself has discovered Lena has woken from her coma. She is supported by a hovering electrical cube and several Bizarro Superwomen and angry with her brother. Lex is elated to see his sister walking, alive and tells her his experiments to cure her must have worked, but Lena is adamant that all they did was cause her years of pain and she then reveals she has control over his armour.

Lex is puzzled by his sister’s anger and professes his love for family. Lena smirks that while he wears the armour he is paralyzed from the wait down like she was for so many years and she plans to cause him a lot of pain.

Lana remembers feeling fear, and how a Doctor Hausler had prescribed her medication that kept her calm, confident and focused. She kept this a secret from John, after all that was going on, a little anxiety was nothing to complain about in the scheme of things.

Some secrets need to be revealed however and listening to the protests of John and Natasha, Superwoman releases her death grip and hands him over to the authorities, but not before a grilling for information. EMP bombs targeting Lexcorp products specifically, shut down Stryker’s Island. Before the bombs life in Stryker’s was hellish. Arkham Asylum was nothing in comparison. The staff were sadistic, solitary confinement was common place. Bare-knuckle fights were regular and encouraged by guards. Torture, experiments and death were frequent all under Lexcorp’s watch. The punishments were now more excessive than the crimes.

Lana is unsympathetic, but Steel points out that no matter their crimes, this treatment is something that no Superman or woman should be ok with. Lana points out the many number of Lexcorp subsidiaries that could have perpetrated this inhuman treatment without Lex Luthor’s knowledge. John angrily retorts that Lana should still be in bed, on medication and not publicly defending Luthor.

Natasha cuts in and tells them they still need to capture the other Stryker’s inmates and repower the city and though Lana is tortured by the lies about her medication they head over to Lexcon Power Substation.

At The Daily Star, George Taylor asks around the newsroom about Lana’s safety but they are interrupted as the internet begins lighting up with stories about Lena Luthor still being alive. The stories weave more lies that Lena was being kept prisoner in Lexcorp Tower and forced to create technology that her brother then sold as his own.

At the same time in the tower basement Lena confronts her brother as delusional. She reveals she knew that when the first Superman died and Lex took on the mantle himself, that the residual solar flare energy was used by China to create Super-Man. In turn, Lex stole Dr. Omen’s technology and experimented on Lena but initially the experiment failed and the fame of becoming Superman lured him away.

Discarded, the experiment actually worked to some degree, it woke Lena from her coma but she found herself broken out of her amniotic tube and a paralyzed heap on the floor, alone and left with her mind racing now well above sixth level intelligence but unable to put it to use. Lena wasn’t the only experiment left down there and a Bizarro duplicate of Superwoman broke free to help her. Lex fiercely denies torturing his sister and abandoning her, but it falls upon deaf ears.

Elsewhere, Natasha explains her plan and with Atomic Skull’s aid they use Superwoman’s energy conversion power to supercharge the station. Lana begins to feel a connection with the city, with it’s people and the enormity of being its champion, alone, without Lois begins to Lana anxious. Natasha is suspicious and questions Lana about the whereabouts of the other Superwoman but the stress causes Lana to have a heavy nosebleed.

Back in the Luthor Corp Lab, Lex is astounded to see an army of Bizarro’s appear. Lena reveals she perfected his technology, something that he couldn’t in years. When Lex brought DNA from the Crime Syndicate Superwoman to the laboratory Lena used her technology to splice her DNA with the sample and clone it repeatedly to create an army loyal to her.

Lena’s wig drops to the floor as she mentally instructs her purple and green super armour to conform to her body. Lena smiles at her brother and tells him she is now Lena Luthor, Ultrawoman.

Lex tells Lena that the tech that she’s used is a Mother Box from Apokolips, but it is damaged, corrupted and using her, a plea that Ultrawoman shrugs off. Lena tells him she is in control and ignores his cries to help her.

In a small office, records of Lana Lang are visible on a screen.

Wow what a story!

Lena reminds me very much of Rachel in the television series Orphan Black; I love her already! Lena is a complex misguided villain and I hope she lives up to maniacal levels! Lana is equally complex, to levels she hasn’t seen in a long time. She was always anxious and found strength first in Clark, then Superman, then John but as much as they inspired and supported her she found true strength in Lois Lane. A woman so similar to her in many ways but far more confident. Lois was also the woman that convinced Lana that she has the strength not just superpowers to become Superwoman with her.

Without Lois, Lana has taken a knock in confidence, turned to prescription drugs and is hiding it from those that love her.

Lena and Lana are just superb to read and that is solely because of Phil.

I loved the art in this issue; ,it was stunning and went hand in hand with the script. I usually prefer in an arc that the art or writing stays constant, but since the art shook things up in equal measure to the story I won’t complain

Too busy, too bright. The digital colouring kills it for me. The palette is so heavy the lush artwork is overtaken. 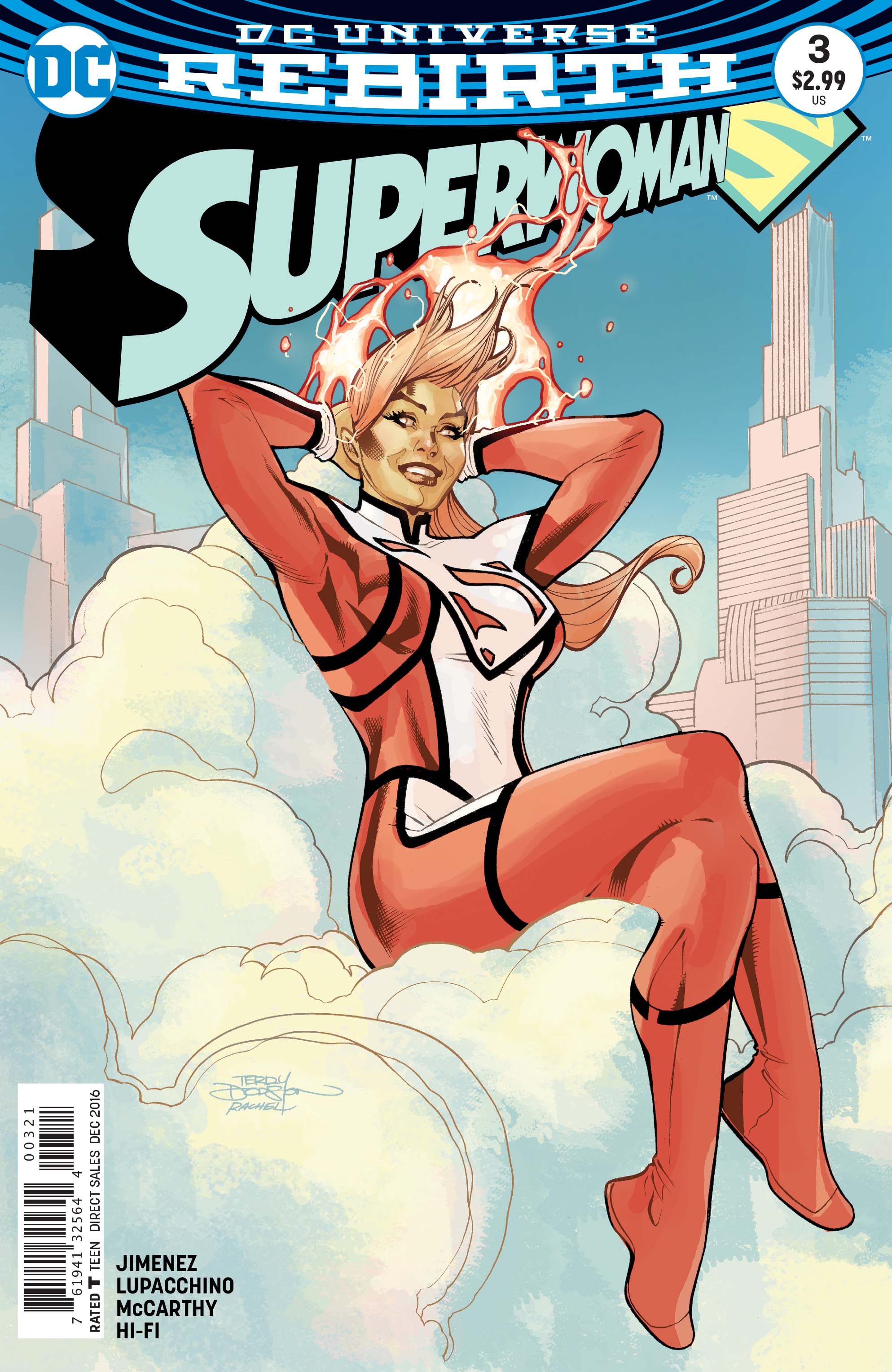 Love love love this! Still smarting a bit as the Lois cover from issue 1 was just stunning but Lana is growing on me and this cover just has an iconic feel to it.