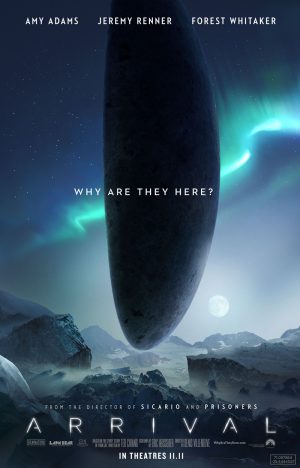 When enormous alien ships appear across the globe, Dr. Louise Banks (Amy Adams) is the linguist who is called on to find out if they’re here to help or hurt us.

This simple premise ends up being far more suspenseful, thought-provoking and emotional than it sounds.

It’s, quite simply, one of the best films of the year: smartly written, beautifully shot, stunningly scored and powerfully acted. The imagery is instantly iconic: The Montana ship, floating above a grassy field surrounded by a sea of white clouds and a growing encampment of curious humans.

The first time the civilians ever so slowly enter the space ship and their first glimpse of the aliens are all stunning sci-fi moments.

I hesitated to write something too glowing about this film, because of the way too much hype can distort a film’s appeal. I hate to think I’d be responsible for anyone walking into the film and being disappointed.

And yet, I have to say it, this is the profoundly moving, philosophical sci-fi film Interstellar wanted to be. It out-Nolans Christopher Nolan on every level.

It’s far from the popcorn whiz-bang of Independence Day, although it can’t help but echo WarGames as the scientists try to prevent all-out global war against the aliens. It’s much closer to the spirit of Close Encounters of the Third Kind, if, say, the entire film were about François Truffaut’s character instead of Richard Dreyfus’s.

Villeneuve ably shifts between the global crisis and Louise’s life, seen in flashes as she copes with the end of her marriage and the loss of her daughter. I haven’t always been a fan of Amy Adams, ditto Jeremy Renner as a fellow scientist, but they’re both very good here.

This is not the kind of humanistic movie I’d expect from Villeneuve, the director of such visceral exercises in paranoia as Prisoners, Sicario and Enemy. (I haven’t seen his acclaimed early film Incendies yet.) There are odd, dream-like visual parallels with Enemy, which I won’t spoil here.

Not everyone will be as moved as I was, certainly. A friend at the same screening thought it was “just okay.” But another friend and I were in tears (as was the fellow in front of us), partly a result of the heartbreaking beauty of Max Richter’s “ On The Nature Of Daylight” that ends the film.

This is a movie that’s a worthy addition to the “big ideas” sci-fi pantheon and one that will surely have you thinking about it long after the final credits roll.

The Arrival Opens in Wide Release on November 11th