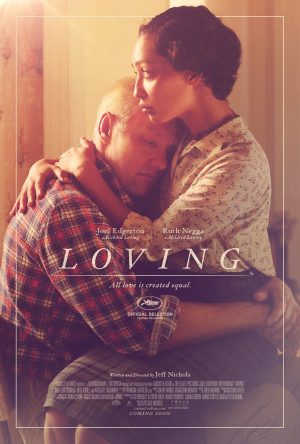 History is full of great speeches that roused the spirit of justice within the breasts of men. From “four score and seven years ago” to “I have a dream”, well-written monologues have the ability to elicit emotion and understanding when a play at straight empathy fails.

Part of what makes Jeff Nichols’ movie Loving so unique is how it moves the audience through the glances and looks shared between an excellent cast with little dialogue to distract from an intimate movie experience.

The film opens on Mildred (Ruth Negga) telling Richard (Joel Edgerton) that she is pregnant. He is silent for a moment, with the only noise being the constant soundtrack of grasshoppers reminding the audience how far out in the country they truly are. Richard’s reaction is a simple smile which sets the tone for the entire film.

The pair is consistently shown as a quiet and private couple who want nothing more to be left alone to live their life together but find themselves the center of one of the most frequently cited cases in history.

Loving is based on the true story of Mildred and Richard Loving, an interracial couple whose marriage was against miscegenation laws in Virginia. Their case against the state went to the Supreme Court, who ruled in their favor citing marriage as a fundamental right. The action made all laws on the books banning interracial marriage unconstitutional.

Nichols does a wonderful job trusting his cast. Instead of putting words in their mouths, he heavily relies on the weight of silences to express emotion. With lesser actors this could lead to a dull and plodding venture. But Negga in particular turns in a stellar performance through her eyes, which have a range that can easily display love, sadness, and joy in a single glance. The level of connection between Edgerton and Negga usurps the need for lofty dialogue.

In scenes where their love is tested by the system, it particularly shines.

Early in the film the couple is arrested in the middle of the night. Richard finds himself released the next morning but forbidden from posting bail for his wife, leaving a pregnant Mildred alone in jail for the weekend. As he is led out past her cell, Mildred runs to the bars and calls his name softly while heartbreaking confusion and longing pass over Richard’s face. He has a few words for the officer leading him out, but the underlying message of helplessness is transmitted so well through his hung head, downward cast eyes, and heavy step that exchanging it for clever pointed barbs would be a loss.

Just as important as the understated writing is the careful attention to setting. Filmed on location in Virginia, the endless fields and rural plywood homes that make up their peacefully mixed race section on the outskirts of town are just as much a character as the Lovings themselves. Mildred in particular has a connection between her home and her heart that is stretched to breaking when they are forced to flee to the city due to the conditions of their release from jail. Establishing shots from car windows showing brick, pavement, and exclusively Black faces create a strong sense of leaving one world for another without having to put a name on it. The way she slowly wilts without saying a word and the increasing concern that Richard displays while watching her brings depth to the emotional burden each one faced. Again, here is a movie where the pauses are more important than the speeches.

Though the two carry the movie, a supporting cast of slightly chattier family members, neighbors, and eventually ACLU lawyers move the story forward as needed. The dynamic between Richard and his friends (all Black) is that he is the “quiet guy” in the group. Alano Miller gives a solid performance as a confidant and protector of the two, and is a welcome third voice to add dimension and levity to family scenes. Nick Kroll plays the lead lawyer Bernard Cohen with eagerness but also a bit of unsettling smarminess which takes away from a few of the scenes he is featured in.

This film is a straight shot, with little embellishment of history. There are no fights, no swelling score, no grand theatrics. Yet the story of the extraordinary circumstances surrounding a completely normal couple in love will leave the audience feeling like they have experienced something larger than themselves or the quiet but kind pair onscreen.