The holidays are here! But we can’t celebrate them until we review some comics first! 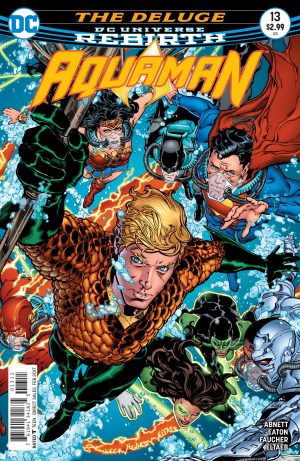 Part two of the “Deluge” Storyline is here and it’s actually fairly decent.

It did get a tad boring at one point where it felt like scene after scene of talking and talking heads.

However, it does pick up and it ends up being a good read.

The war between the United States and Atlantis takes a turn for the worse when the U.S. activates its newest weapon to assassinate Aquaman and dismantle his undersea kingdom: the Aquamarines, super-soldiers who have been biologically enhanced to combat the abilities of any Atlantean.

It’s good to see this book being consistent finally after a wobbly first 10 or so issues.

Abnett may have found his groove here. The art by Eaton is pretty good too and one page in particular near the end was really impressive. A good issue to end the year on! 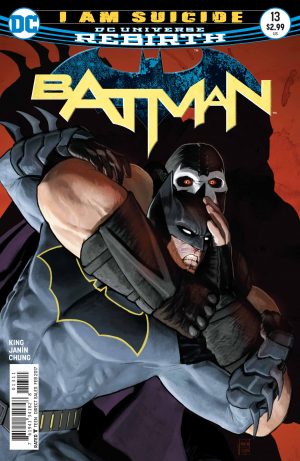 Well, it’s been a slow four issues here in Tom King’s Batman title, but finally we made a little headway here.

Batman faces off against Bane and there seems to be a resolution of sorts. I wasn’t too thrilled with the story as a whole…I kept waiting for something to happen.  And then this being the conclusion….well, I don’t even know if we got started.

Batman and the remains of his team come face to face with Bane and the Psycho-Pirate in a final battle at Santa Prisca—and learn whether this was truly a suicide mission!

The art by Janin these past four issues has been really superb. He draws the title nicely and it would be great to see him stick around.
I heard this was supposed to tie into the Watchmen DC tie in…so I’m guessing it’s the Psycho Pirate that has the connection?

All I have to say is DC better start trucking on that storyline in the New Year….they really left us hanging thus far. 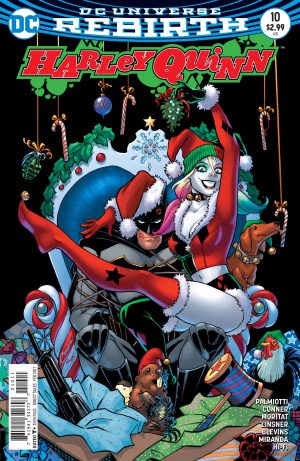 This issue has short stories to celebrate the holidays with. I am not the hugest Harley Quinn fan, but I am a fan of Connor and Palmiotti and what they have done with this character.

They have decided to have fun, try new things out, and get some great artists to work on this title.

The best two artists on this issue for me were Joseph Michael Linsner and Bret Blevins, two artists who are always a delight. The art is great and the story is wonky. It’s comics at their silliest.

Connor and Palmiotti have some more great artists coming up with Neal Adams and Simon Bisley. Let’s hope they never stop. 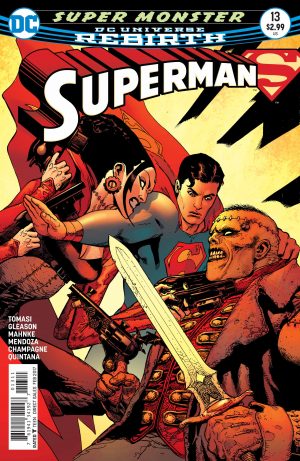 I said it before and I’ll say it again: Doug Mahnke is one of the best artists working in comics.

Anytime he illustrating a book, I know I can expect a high quality job. Here he is again, doing a great job on Superman. I really wish he would draw the book full time. He’s great.

Superman is in a fight in this issue. Who is he fighting against? Well, Here comes the Bride and her four arms are loaded with weapons.

And on what side of those guns is Lois Lane going to be?

The mystery of one of the citizens of Hamilton will be exposed with monstrous consequences for all.

This creative team here is a pretty good one. I think they should keep it overall. They could really develop the story (the three of them) and make something worth lasting, rather than it being okay for a few issues, then great for two, then back to being okay.

Then this book would be truly as excellent as it deserves to be. 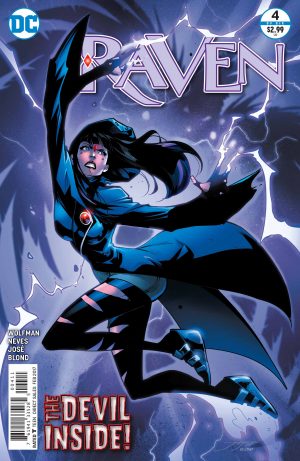 Let’s hear it for Marv Wolfman!

He still writes with a great flair and he’s been in this business forever.

Yet he keeps the quality up issue after issue. And that’s just damn impressive.

Wolfman is one of the greats and here he does great work yet again.

When a strange new group of masked villains takes credit for the glowing orb and holds the entire city of San Francisco for ransom, Raven is forced to confront them head-on!

Are they any match for the daughter of Trigon? And is there more going on here than meets the eye?

The story is awesome and the art has been good as well. I pick this book up each time knowing that the quality will be top notch. And I’m never disappointed. Pick this up yourself to see how it’s done. Go Wolfman! 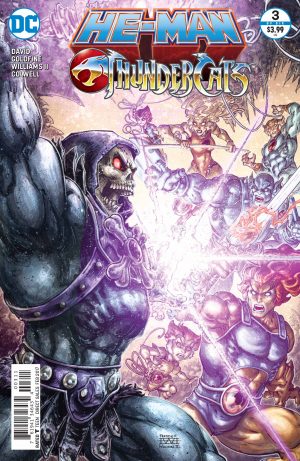 The year’s guiltiest guilty pleasure rages on! The Masters of the Universe are back and this time they are in the same comic book as the Thundercats! How cool is that? You can’t help but love this title. I love it.

The ThunderCats team up to combat a new foe: Skeletor!

And as young King Lion-O battles this evil from another world, he distracts Skeletor from an important fight against Mumm-Ra.

With the Power of Grayskull hanging in the balance, who can possibly turn the tide of battle?

The writing? Who cares! It’s He-Man! It’s Skeletor! It’s the Thundercats! You can’t go wrong. Williams is the perfect artist for this as well.

A delightful treat through and through. 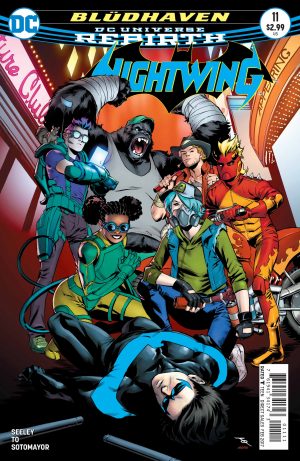 Nightwing’s latest storyline going back to Bludhaven plods along in this issue.

I loved this book a few years back…now it seems to be spinning it’s wheels in a circle…a circle leading nowhere.

They call themselves the Run-Offs! And now, this group of villains that Batman and Nightwing ran out of Gotham City plan to do the same to the former Boy Wonder! But can he find the serial killer terrorizing the city before the Run-Offs catch up with him?

Seeley writes this tale in a kind of boring way and To does what he can.

But the whole thing comes off rather unexciting both in the story and visually. This could be a better title. I think even with this creative team.

Right now? It just isn’t there. 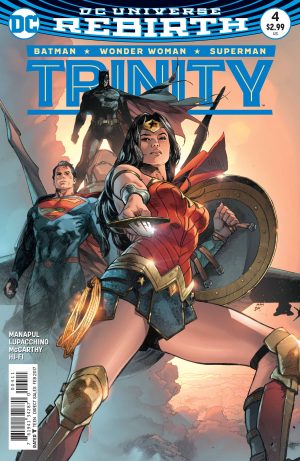 You’ve got a comic book with Batman, Superman, and Wonder Woman in it.

And it’s not bad.

It suffers from the same problem as Nightwing, in that there is a good creative team on this, and it doesn’t really go anywhere.

Which is a complete and total shame, because this could be great.

The trio’s tribulations have turned the Black Mercy’s gift into a world of nightmares that give birth to a horror that can only be called the White Mercy.

And what scares Batman, Superman and Wonder Woman could destroy the world!

I actually really love the art here. It’s fairly great. Manapul just never excited me as a writer so it’s a bit flat. Still, Lupacchino is a good artist. If there was a better writer (Matt Wagner? Hope! Hope!) I think this would soar to the top of everyone’s reading lists.

Green Lanterns #13
Written by Sam Humphries
Illustrated by Ronan Cliquet
Published by DC Comics
The writing is fairly standard but this issue is actually fairly decent thanks in part to Cliquet. His art has a lot of creativity to it, and great imagery and gets us over the hump of the standard story.
RATING: B

Lucifer #13
Written by Holly Black and Richard Kadrey
Illustrated by Marco Rudy and Ben Templesmith
Published by DC Comics
I have never been a reader of this book but this issue had two stories. The first was okay with some damn good art by Ruby…and the second story by Kadrey with Templesmith art called “Secret Santa” is fantastic. One of the best short stories of the year. Kudos.
RATING: B+

Teen Titans Go! #19
Written by Paul Morrissey and Heather Nuhfer
Illustrated by Marcelo Dichiara
Published by DC Comics
I truly couldn’t read this book. So I gave it to my 7 year old daughter Callie to review. She’s a fan of the show and we read it together. At the end, she gave it an “awesome.” And then went to sleep.
CALLIE’S RATING: A+

This Suicide Squad series is definitely better than the current one on the stands. Yet, I miss the John Ostrander stories. Bring those back. Still, the stories here are decent enough and the art, especially by Richards, is pretty decent too.
RATING: B-