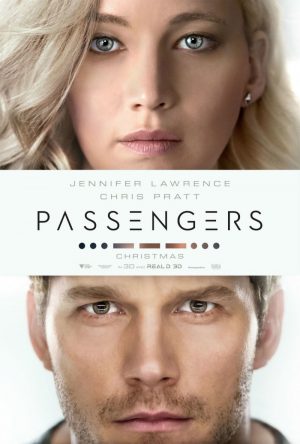 There is never a convenient time to have an equipment malfunction while on a trip.

Inevitably, it will happen while between two places and lead to calling for help or a long walk to the nearest service station.

In Passengers, Jon Spaihts has attempted to write the ultimate intergalactic inconvenient breakdown story. Peppered with a fair amount of cheesy popcorn blockbuster moments and roll-your-eyes space dilemmas, Passengers shot for the moon but landed just barely within reach of the stars.

Who would not jump at the chance to start over? Not just with your own life, but civilization itself? That is the lure for those on the luxury space liner headed for a colonization planet over 120 years of travel away. Unfortunately for Jim Preston (Chris Pratt) and Aurora Lane (Jennifer Lawrence) they are awakened a full 90 years ahead of schedule.

As the two navigate their fate together, their budding relationship takes a backseat as the danger of a ship systems collapse threatens the lives of everyone onboard.

Given the premise, it is no surprise that this is a minimalist movie as far as casting. As such, it requires that Lawrence and Pratt carry a considerable amount of responsibility to drive the story forward. It is clear that this burden is not equally shared, as Chris Pratt ends up doing the majority of the heavy lifting in each scene. He completely steals the show as far as affability and strength of character. From the moment Jim first wakes and debates with the mirror about what to wear for the first day of training, he is the kind of likable guy-next-door that is easy to root for and typical of many roles the actor is known for. However, as he explores Jim’s wavering sanity at the realization of spending 90 years on a ship where over 99% of the other occupants are still in stasis, he is given a small chance to show his ability at imparting a sense of emotional complexity.

Lawrence is a good fit in her role as the distant but attractive Aurora Lane, who takes a longer time to come around to both her fate and shipmate. Her best work comes from roles where she is able to play someone either above or apart from it all so she is playing to her strengths in much of the movie.

Just as important as our two leads is the glossy high-tech setting for their journey. The production value of the sets is immediately visible. There is nothing without agency or that appears plucked from a tacky fantasy novel. Each element, from the sleek cafeteria to the lush bar area (staffed by Michael Sheen as the ever-charming and available android bartender) seems like Elon Musk may have been approached as a consultant. Holograms and digital interfaces are flawless representations that reflect the futuristic minimalism we have come to expect from the genre.

Additionally of note are the views of space and zero gravity scenes that are brought about by contrived situations but fun to watch unfold.

There in fact is the main failing of the movie: the actual plot and interaction of characters. While I am loathe to spoil anything, the way in which the two come together (and are driven apart, and come back together) can be seen light years away.

Unfortunately the charm of Chris Pratt and attractiveness of Jennifer Lawrence cannot help the fact that they have a lackluster chemistry together. The only way to be satisfied with their pairing is to remember that they literally have no other choices for the rest of their lives. Even then, their intimate scenes are perfunctory at best.

Separately assessed, all of the standard elements of a formulaic romantic space thriller are there: android companion, perilous journey, good guy with a secret, beautiful woman thrown into action, sleek spaceship: accounted for. But the pieces never completely come together in a way that is truly satisfying. Passengers sits right in the middle of the intergalactic road.