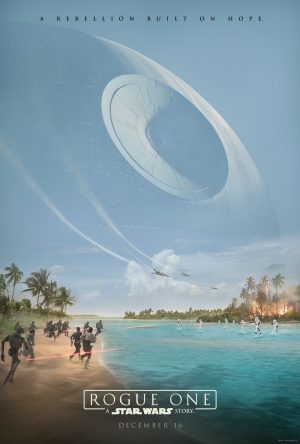 SPECIAL NOTE:  This review will contain no specific spoilers for the plot of the film other than what has already been disseminated through the trailers, TV spots, or your knowledge of the rest of the Star Wars trilogy so that you may enjoy the film as much as I did.

And now I begin.

A LONG TIME AGO
IN A GALAXY FAR, FAR AWAY…

The familiar opening title card to an epic storyline that has spanned almost 40 years, once again opens the first spin-off film in the gigantic sprawling space story, a story originally created by George Lucas.

Rogue One has emotionally compromised me.

Though I was prepared to love this movie, nothing could have prepared me for the overwhelming emotion and feelings that swelled up within me from a depth I did not know existed in myself.

This will not be an objective or even remotely critical review of the film. You will have to go elsewhere for such a thing. I will say that I understand that there are going to be things in this film that absolutely piss off, disappoint, and quite possibly ruin the movie for some viewers.

I get that. It absolutely DID NOT for me.

It is NOT perfect. What it is, however, is a return to a time when I sat in an oversized movie seat, Junior Mints in hand, my feet not even touching the floor as I madly flipped through the Kenner toy catalog of space ships, characters, and toys for a film I hadn’t even seen, but which knew I wanted every single one of.

I watch Rogue One and I am four years old again.

Although the familiar drums and horns of Alfred Newman’s 20th Century Fox Cinemascope fanfare aren’t there anymore, and like Star Wars Episode VII: The Force Awakens, it begins simply with the Lucasfilm LTD logo before displaying those familiar expositional words, I am equally transported in time and space.

A long time ago, in a galaxy far, far away.

And it begins anew.

Rogue One: A Star Wars Story, for those of you who don’t live and breathe Star Wars, is the pulse-pounding story of the attempt, by a small band of Rebel spies, to steal the secret blueprints of a battle station so powerful it can destroy an entire planet.

In case you missed any of the myriad trailers or TV spots out there being broadcast like a klaxon, I’ll go so far as to say the movie centers around a woman, Jyn Erso, whose father is the chief architect of the weapons system for this station. She stages a suicide mission to rescue him and retrieve the plans in hope of stopping the evil Empire from continuing its strangle hold reign on the galaxy.

Though similar, this film has many departures from the Saga as told so far. Flashbacks, a prologue, and non-linear editing refresh the straightforward storytelling style we are so familiar with. I love it. This is a film within the known established universe but apart from it as well. This frees it from the shackles of the previous storytelling dynamic and allows the writers and director, Gareth Edwards to tell what is the best Star Wars story so far. And he does.

I love The Empire Strikes Back. The original Star Wars will always be most important in my heart. The Force Awakens was brilliant and a beautiful love letter and reintroduction to the universe. Rogue One, a tale we basically already know about in vague terms and story, is the best shot, acted, and directed film so far in the Star Wars franchise.

I think it might be my favorite now. On a purely film making basis It is the best. To me, it is on equal ground with Empire emotionally. It is the first film since the original to make me feel like I did the first time I saw Star Wars. So yeah. I think it wins. Damn.

Here’s the thing, because we already know how it ends, it NEEDS to be a solid story. It has to have well developed characters that we are invested in. With such a short amount of time to get us to care about them, a riveting way of telling the story that is already known must be made in order to not fall into the trap that was the prequel trilogy.

Rogue One builds on the universe it lives in. It fleshes out the world. You get a sense of the breadth and scope of the universe without having to rely on so much dialogue exposition as the prequels did because they are not reinventing the wheel. They are making it smarter, better, faster, and richer.

I spent the entire time of this film, literally, on the edge of my seat. I cried a lot. They were tears of overwhelming joy to see the Star Wars universe I grew up with again. There were nods for us original fans specifically. I would say they included the perfect amount because using too many, and it becomes pandering, but too little and we feel cheated; I definitely didn’t feel either. There were also so many wonderful Easter eggs for those who have read the books, played the video games, and watched the animated TV shows. Again, it’s nothing too much, but enough to make it feel like the world we once knew and loved.

The cast, led by Felicity Jones as Jyn Erso, is brilliant. Not only do they live in this world, they are this world. It isn’t the settings and the technology that make it Star Wars; it is the people and the actors who embody them that make this the galaxy far, far away, for me. That is one of the biggest things that takes me out of the prequels. The actors just don’t feel and act like they are in a Star Wars film, at least not the ones I love and remember.

Closer in style to the old WWII films of Hollywood yore than to the more slick style of Abrams’ The Force Awakens, Rogue One has a grittier, lived in feel, much like its inevitable sequel, A New Hope does. The humor is perfectly timed. Alan Tudyk, as K-2SO steals every scene, and though Ben Mendelsohn’s Orson Krennic isn’t as menacing as I had hoped he would be, there is good reason, and that is all I will say.

This is the Star Wars film I have been wanting for over 30 years, a true prequel to the original trilogy and one that wasn’t a reinventing of the universe I loved, but instead, a fleshing out and expanding of the Star Wars galaxy.

It is a film as dramatic and funny as it is exciting, with characters I can love, hate, and feel heartbroken over when they are taken away from me. As much as I excitedly look forward to seeing the continuation of the trilogy from 40 years ago into Episodes VIII and IX, Rogue One is like a long overdue love letter that was lost in the mail for three decades, only to be finally delivered to me much like the stolen data plans.

Rogue One, your mission is complete. Your efforts have saved the galaxy for an old fan who was starting to get too old for this sort of thing.