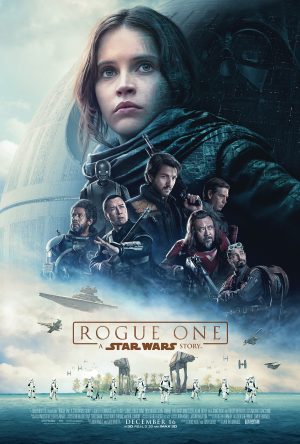 After all those troubling reports of reshoots, Star Wars fans can breath a deep, satisfied sigh of relief that Rogue One, a prequel to A New Hope, is a more than worthy addition.  It’s been described as a heist movie, which it is, in part, but it also delivers the epic grandeur, spectacular action sequences, and laughs and tears we expect from the series.

While The Force Awakens reunited us with beloved characters Han, Leia and Chewie, it also introduced new characters Rey and Finn, whom fans quickly embraced. Fortunately, we warm up to the new Rebel characters in Rogue One — Jyn Erso (Felicity Jones), Cassian Andor (Diego Luna) and Chirrut Îmwe (Ip Man star Donnie Yen) — just as quickly. And yes, they are a ragtag bunch, whose diversity underscores the series’ message of hope, resistance, and selflessness.

The film begins with Jyn as a young girl as she’s forced to bid farewell to her father, Galen Erso (Mads Mikkelsen). Years ago, Galen, a talented scientist, escaped the clutches of the Empire rather than work on the Death Star. But the Empire, in the form of dour Director Krennic (Ben Mendelsohn), has tracked him down and he has no choice but to return to the fold and continue his deadly work. It’s a pleasure to see Mikkelsen, who’s always so good as a villain, in a sympathetic role for once. And the dissonance of seeing the usually delightfully scuzzy Mendelsohn (Animal Kingdom, Bloodline) in uniform — with a cape no less — quickly fades as he brings subtle shades to his role as fascist middleman.

Jyn, meanwhile, grows up to be a scrappy young woman who has no love for the Rebel Alliance.
While Rey’s character arc was about discovering her destiny, Jyn’s more closely resembles Han Solo’s — she’s got to lose her cynicism and embrace the cause. Squint and she might be Princess Leia’s sister, one who’s equally adept with a blaster. She’s a more ideal mix of Han and Leia than we got in The Force Awakens. If only this had been their child instead of mopey Kylo Ren!

Jyn learns that her father built a fatal flaw into the Death Star and is determined to exploit that vulnerability, even if the Rebel Council considers it a lost cause.

Like any film in which a high-stakes job must be pulled, it takes a while to assemble all the key players. The motley crew that sets out to steal the Death Star plans includes Rebel spy Cassian (Luna), blind martial-arts master Chirrut Îmwe (Yen), and former Empire pilot Bodhi Rook (Riz Ahmed). Each one plays an essential role in the mission and each actor gets a chance to shine. Expect to become fans of them all, if you aren’t already.

Yen, in particular resonates as a man with a deep connection to the Force and Jedi-like powers, but who the actor insists isn’t a Jedi.

Seeing as George Lucas was so heavily inspired by Akira Kurosawa’s The Hidden Fortress, it’s about time we have an Asian character front and center. (Yen’s three Ip Man films are all on Netflix streaming now if you want to catch up.)

The group of Rebels is aided by a reprogrammed Empire robot named K-2SO (brilliantly voiced by Alan Tudyk), who delivers the blunt sarcasm we’d expect from C3PO if he’d gone on a bender, hit his head and lost all sense of protocol. When we first meet him, he tells Jyn: “You’re being rescued. Try not to resist.” While “sarcastic robot” in any other hands would be cringe-worthy, luckily, K-2SO is clever comic relief whose habit of telling everyone “the odds” is a running joke that doesn’t get old.

Rogue One has numerous other callbacks (or rather, call-forwards) to the franchise, including the appearance of a few familiar faces that I won’t spoil here.

The film ends on a note that dovetails seamlessly with A New Hope, which should inspire you to immediately rush home and rewatch the very first Star Wars film all over again. It should also inspire you — as any good film should — to channel your own inner Jyn or Rey or Luke and look for a way to serve a cause bigger than yourself.

Given the horror that was 2016, it feels damn good to cheer on a brave crew refusing to submit to an evil Empire.