It’s December and whether you’re celebrating the Feast Of Winter Veil, Jesus’ birthday, the overwhelming selection of festive flavoured coffee on offer or you merely enjoy the outright consumerism of it all, there’s no escaping the image of a jolly, rotund man with facial hair, wearing red throughout…and no, sadly I don’t mean Mario. 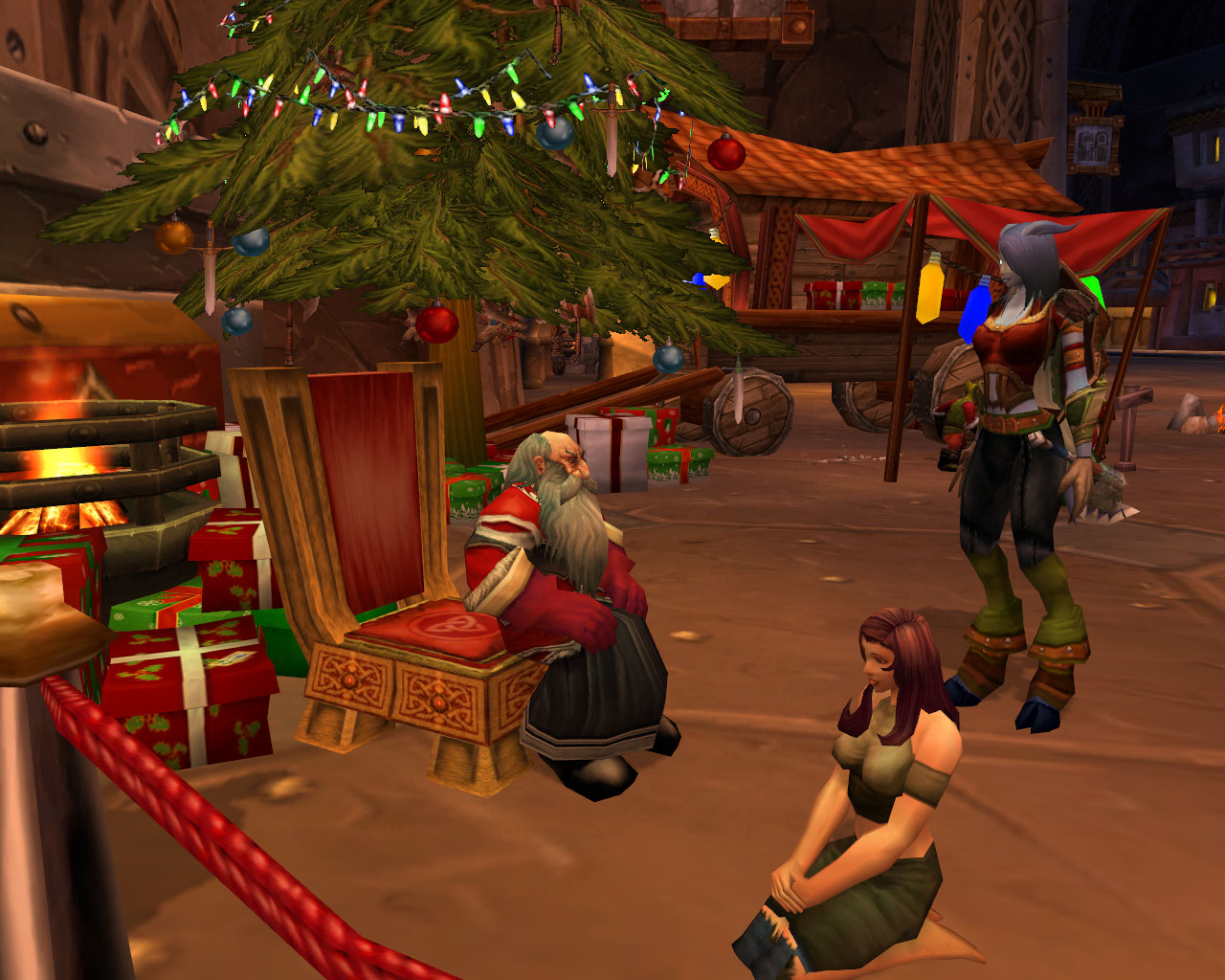 Instead of being a Scrooge about it and grumbling about being force fed this most capitalist of all holidays in the form of Christmas music being played eeeeeeeverywhere, this year I’ve decided to embrace it and to celebrate Old Saint Nick himself.

Having featured in video games since their humble beginnings in various incarnations and even having whole games based on him, Father Christmas, Santa Claus, St Nicholas, Coca Cola Product Placement Man, whatever name you give him, has had a long career and will probably continue to do so thanks to our plutocratic overlords.

Let me begin by getting it out of the way now, I am not going to talk about the awful Tim Allen cash in title on the Game Boy Advance, just know this…not only does this awful film exist but so does this tie-in game. Oh, and if you happen to participate in a ‘Secret Santa’ with your work colleagues and don’t particularly like your recipient, this is the gift for them. 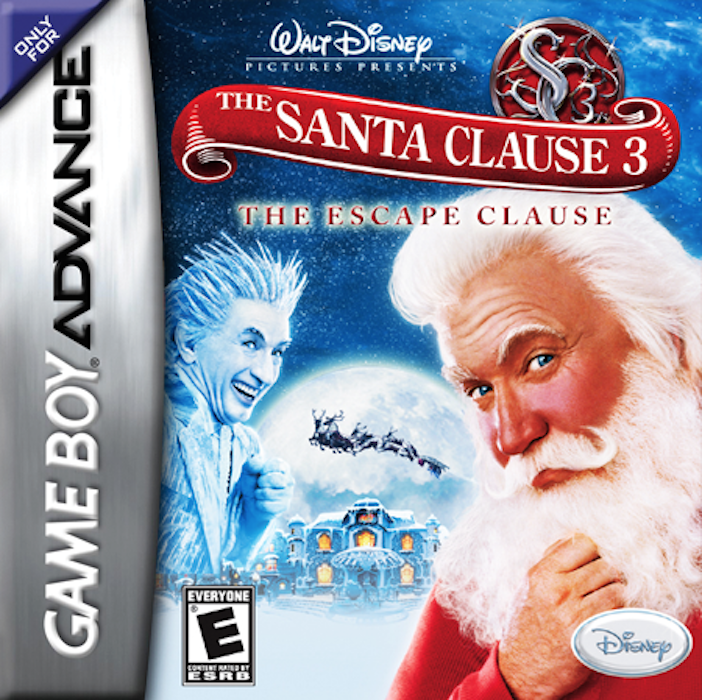 Perhaps the least Santa of all video game Santa’s can be found in Special Delivery: Santa’s Christmas Chaos (1984). This Commodore 64 game had three levels, the first sees “Santa” collecting presents that are dropped by angels, avoiding clouds and sneaky devils who drop fluke gifts. I call him “Santa” because seriously, look at these images: 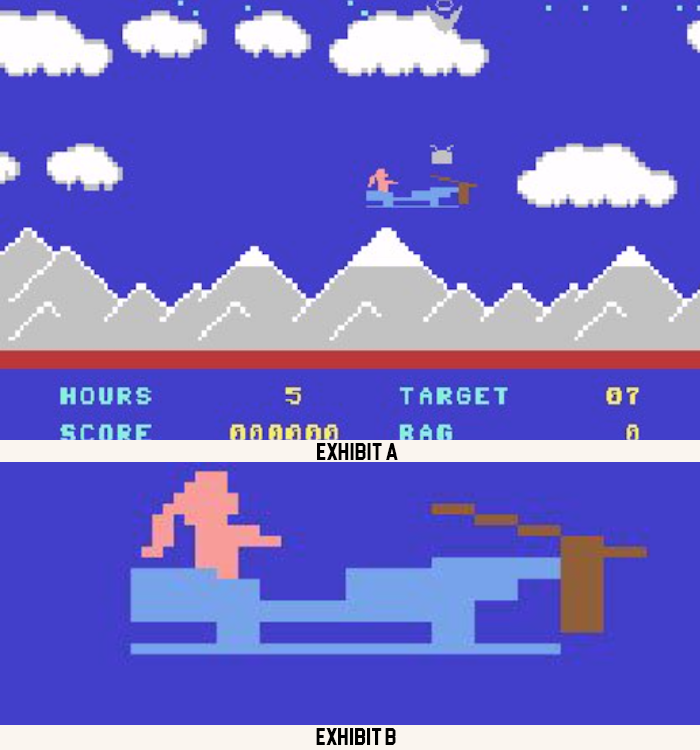 He looks like a naked woman with a pony tail made of her own skin riding some kind of torture device complete with a decapitated reindeer head on the end! That nightmarish image aside, the game inevitably ends with not-Santa depositing gifts in a weird stealth action sequence where he/she must avoid sleepwalkers.

Another Santa-not-Santa looking character can be found in the game Secret Of Mana. When you first encounter him he resembles an abominable blue, child devouring monster. He does of course revert back to the jolly old man himself, explaining (in probably the most detailed backstory any iteration of Santa in video games has ever had) that he was trying to harness the awesome power of the Mana Seed in order to grow a giant Christmas tree and he couldn’t turn back because children had stopped believing in him.

Well, he’s a simple man who enjoys bringing festive cheer so why wouldn’t he want to create a giant tree and kids do grow up and stop believing in him. That part checks out I guess but does it really make up for the devastation he caused when it mutated him into a hideous child eating beast? Ho…ho…NO, I don’t think so.

If you prefer your Mr Claus a little more traditional looking, perhaps in a side scrolling shooter where Santa and Rudolph must battle their way through airspace littered with toys, Christmas crackers and in the Spectrum version, for some reason… toilet plungers (ah, developer in-jokes we’ll never get) then Santa’s Xmas Caper is for you! This game was produced by Zeppelin Games and spanned various consoles including the Commodore 64, the Spectrum ZX, the Amiga and the Amstrad. 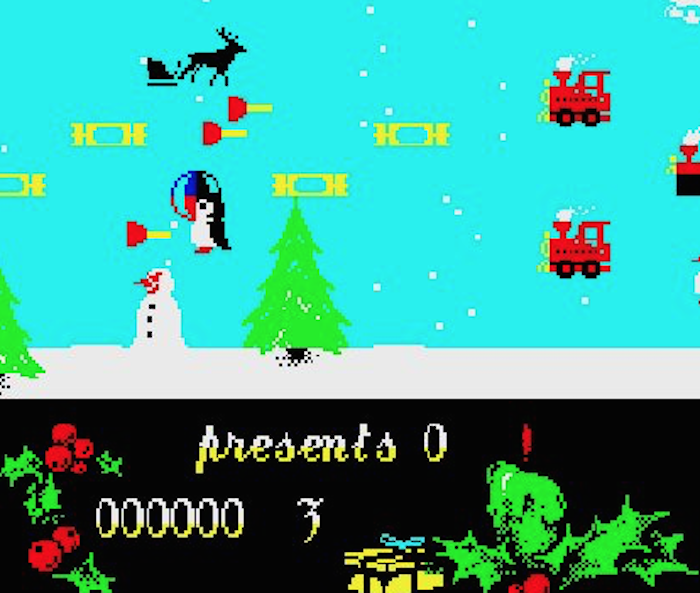 Not long after Santa’s Xmas Caper came the Christmas version of Jetpack, aptly named Jetpack Christmas Special. In PC game Jetpack, you play a character who (as you’d expect with that title) has a jetpack. He also has the ability to burrow through certain surfaces and the objective is simple enough, obtain all the gems.

Of course, you regularly need to refuel your equipment, much in the same way Father Christmas has to refuel at houses along his journey by eating mince pies, cookies and drinking all of your dad’s best brandy. The Christmas version of this game added ten more stages and as well as playing as the fat red man himself, instead of collecting gems you collect presents. 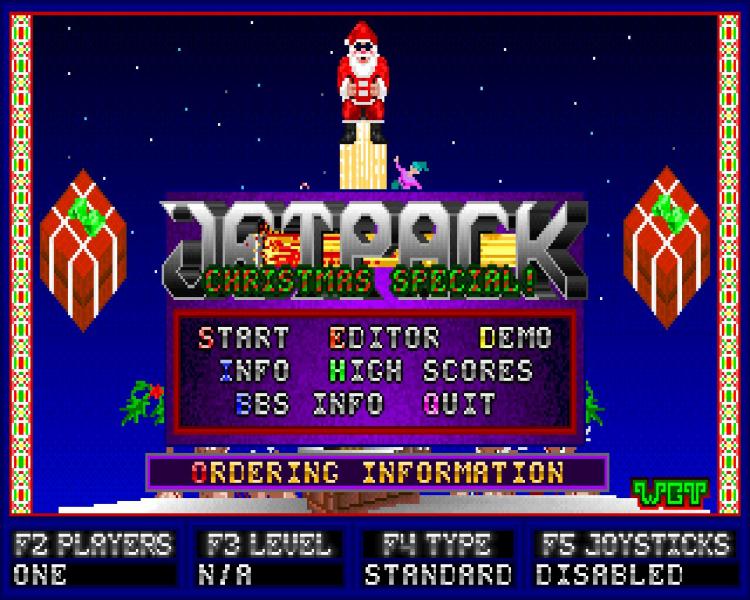 Another thinly veiled attempt at a cash-in for Christmas is the game Xmas Lemmings (AKA Holiday Lemmings). It was the full game using a Christmas theme and for many this game holds fond memories. I specifically remember enjoying it despite the fact the festive theme though didn’t add anything as such. After all, it was 1993 and add-ons or mods weren’t capitalised on like they are today.

Although there is no Santa in the game per se, they all wore cute little Santa hats and trudged through pretty snow scenes and I like it so I’m giving it a (possibly controversial) pass! 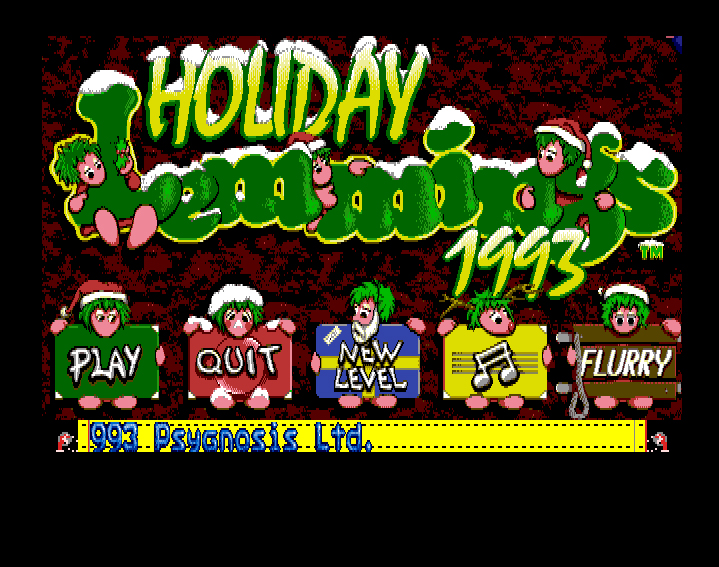 There’s no doubt that this next game definitely featured St Nick as Santa Claus Junior is about a depressed looking Santa who seeks out the help of a young boy when a witch starts to turn toys into monsters because presumably, young children are perfectly suited to endure freezing cold conditions and are highly skilled monster killers.

If this Santa’s attitude to child safety and to kids in general wasn’t already bad enough, he also judges little Claus Jr on his performance after each level with an air of arrogance. Wow…this Santa is a dick! 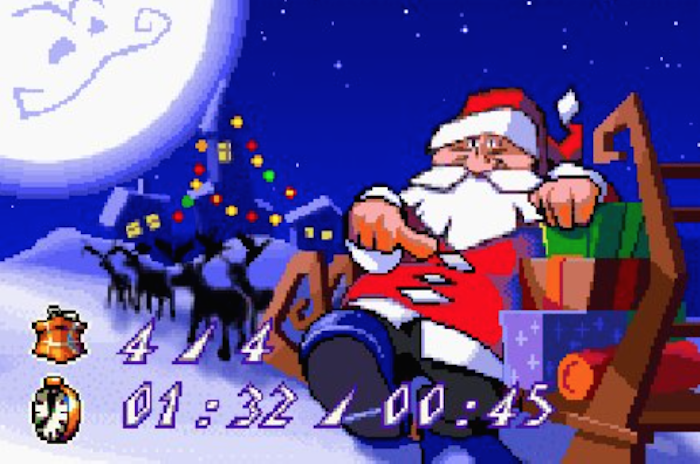 Daze Before Christmas is another colourful, festive platformer where Santa’s enemy is an evil snowman who has imprisoned all of Mr Claus’ loved ones. But don’t feel too sorry for the red man, it turns out he has an alter-ego.

It’s a very silly, charming game and I fully appreciate the Gremlins-esque quality that this feature added.

Another game that adds a humorous spin on Christmas is Duke Nukem: Nuclear Winter. Duke is the only one who can save Father Christmas in this festive add-on for Duke Nukem 3D because he’s been brainwashed by aliens.

Add to that, sexy female elves with machine guns, killer snowmen and pick ups that look like presents and you’ve got yourself a solid Duke add-on.

As we’re in the season of good will and we couldn’t possibly consider being charitable at any other time of the year, I thought I’d end on a game that had charitable intent. The Official Father Christmas was a Spectrum ZX game released in 1989 that, like most other games of the time, was also ported on the Sinclair. 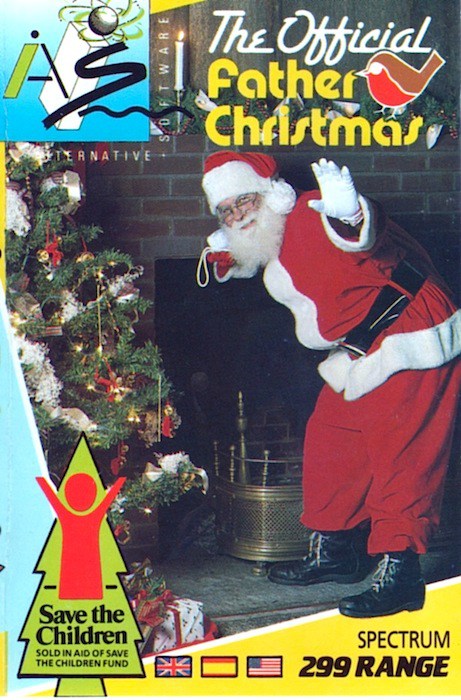 It featured jolly Christmassy music and had multiple stages including one where you search for sleigh parts to assemble your sleigh only to be thwarted by elves who keep touching it, causing parts to disappear for you to go and find again. Damn pesky elves!

Another stage sees you catching gifts correctly and flying over rooftops distributing gifts into chimneys below avoiding planes, birds and clouds. Who knew that clouds were such a menace or that birds were anti-gift giving?

This game certainly wasn’t anti-giving, as proceeds from it were donated to the UK charity Save The Children who work to give poor and vulnerable children a better life. Pretty damn nice if you ask me.

With that, I bid you farewell and Merry Festive Non-Denominational Winter Consumer-mas Tidings to you all! 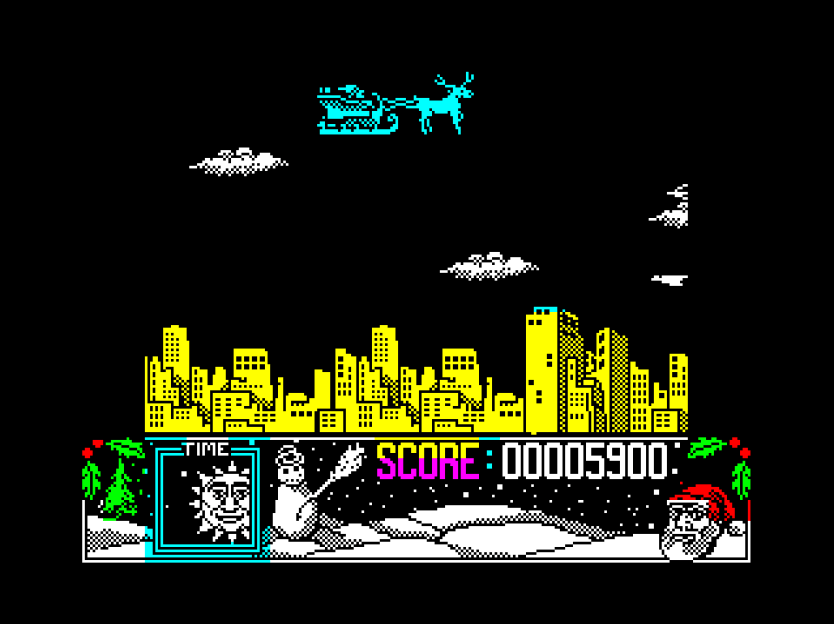