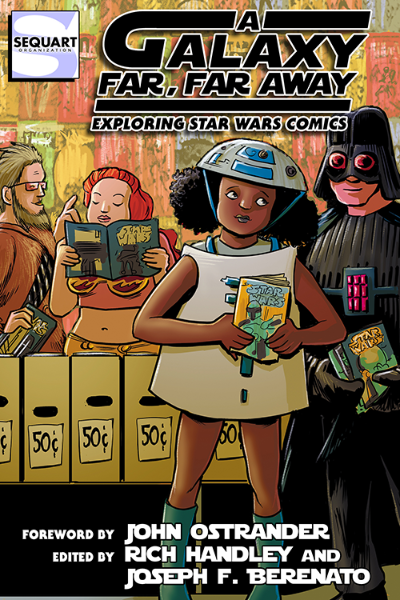 Sequart Organization is proud to announce the publication of A Galaxy Far, Far Away: Exploring Star Wars Comics, edited by Rich Handley and Joseph F. Berenato.

Ever since Star Wars hit theaters in 1977, comic books and comic strips have taken the characters beyond the silver screen.

Since then, almost 2000 comics have been produced from a variety of publishers, including Marvel Comics, Blackthorne Publishing, the L.A Times Syndicate, Dark Horse Comics, Scholastic, Tokyopop, and more, addressing every aspect of the Star Wars universe.

From Jaxxon to Cody Sunn-Childe, from Ulic Qel-Droma to Lady Lumiya, find out how comics helped to keep the Star Wars universe alive… and why you’re missing out if you’re not reading them.

For paperback and Kindle purchasing information, click HERE. (Just a reminder: you don’t need a Kindle device to read Kindle-formatted books; you can download a free Kindle reader for most computers, phones, and tablets.) The book runs 340 pages and features a foreword by comics legend John Ostrander and a cover by Kevin Colden and Miss Lasko-Gross.

About the publisher
Sequart Organization is devoted to the study of popular culture and the promotion of comic books as a legitimate art form. Sequart has released twenty-five book, seven documentaries, and thousands of online articles. Its documentaries include Neil Gaiman: Dream Dangerously, and its books include The British Invasion: Alan Moore, Neil Gaiman, Grant Morrison, and the Invention of the Modern Comic Book Writer.