Did you know the closest living ancestor of the T-Rex is a chicken? Yeah, turns out chickens are pretty badass… sort of.

In video games however, chickens have a long and varied history, they’ve become something of a joke and have also been treated pretty badly so it’s no surprise that in some games they are straight up evil. 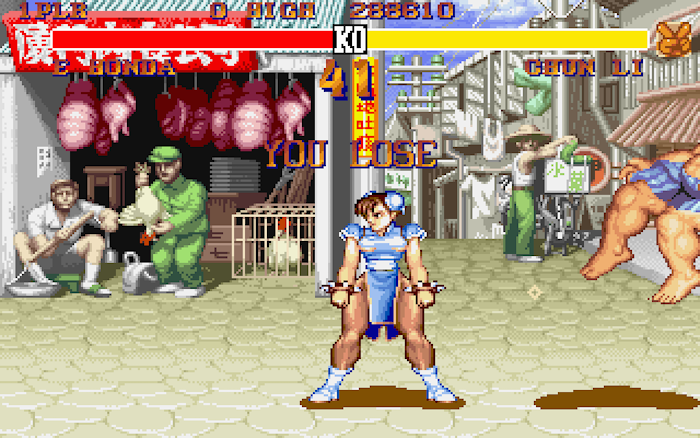 Chicken abuse has been a constant and re-occurring theme in gaming. For some reason, we enjoy attacking them, mocking them and using their limited ability of short range flight for our own means.

Take Cuccos in The Legend of Zelda series. The first game they appeared in was A Link To The Past. I don’t care what anyone says, everyone who has played that game decided to attack one, maybe out of curiosity to see what happens? Maybe to see if it could be murdered for food? Or because chickens are your mortal enemy? Whatever your reason, or lack of reason, I guarantee you’ve attacked a Cucco. 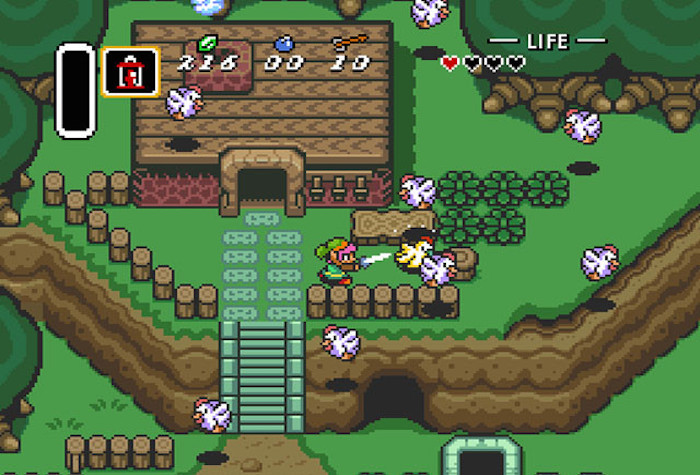 And yes, while I’m very aware they have a different name, it is explicitly obvious that they are chickens. Naturally, after you viciously attack them they retaliate (fair play to them) however when attacking you they call for back up and flocks of chickens descend upon you reminiscent of a scene in Hitchcock’s The Birds.

In Ocarina Of Time you can pick up chickens and use their limited flight to help you glide to hard to reach areas, so you can hardly blame them for attacking you. Imagine trying that with a bird of prey or even a seagull. Gulls in British seaside towns are pure evil. In fact, some of us Brits call them “Sky Bastards”.

We take advantage of chickens because they are seemingly unthreatening. In many games such as Red Dead Redemption, we hunt them and they are easy target practice. However, a word of warning to anyone who has ever played Skyrim. Do NOT fire an arrow at one. 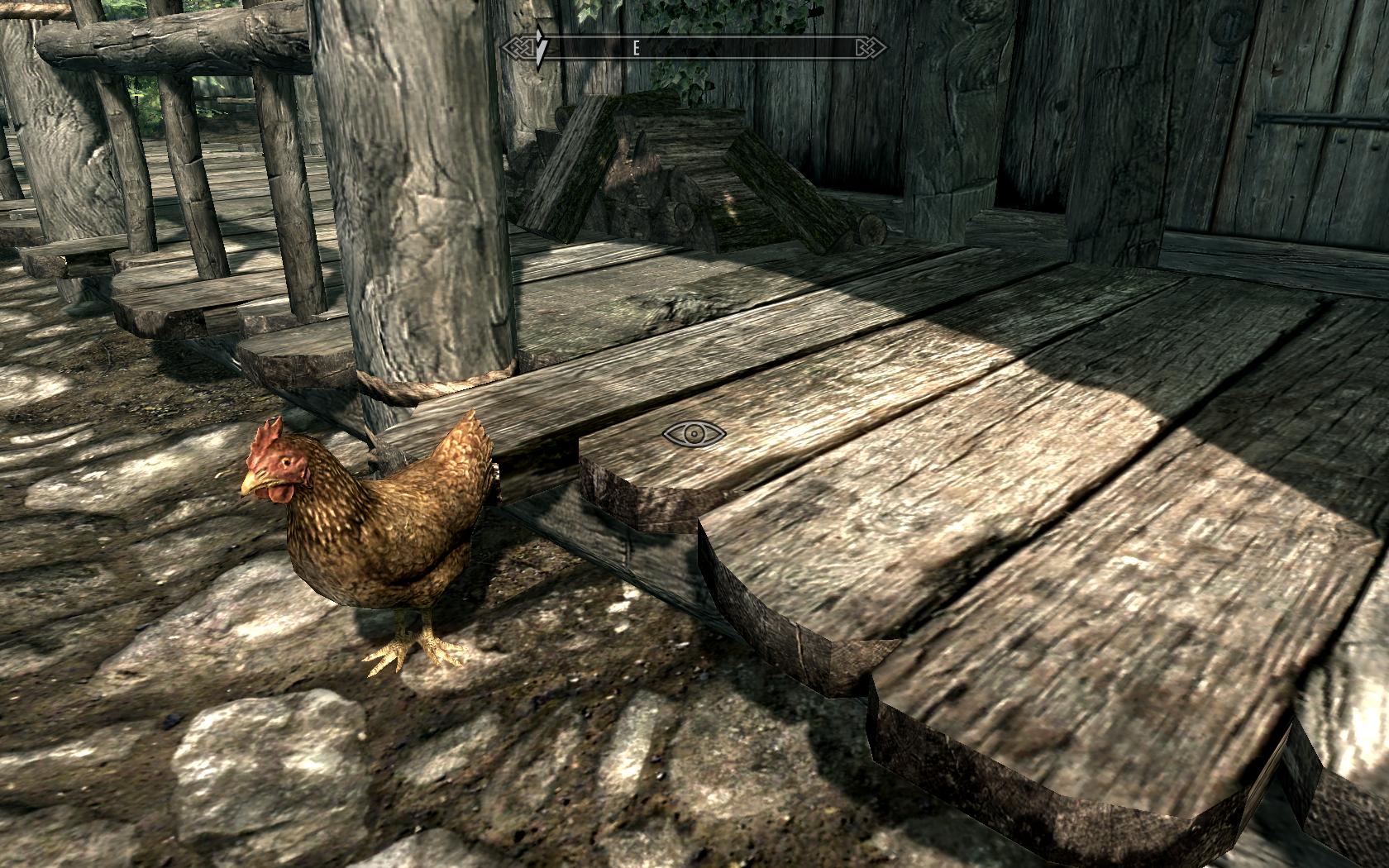 My first play through of the game, very early on, I came across the pleasant settlement of Riverwood. I had recently acquired a new bow and decided to test it out on a chicken. This led to multiple bounties being placed on my head and the entire townsfolk turning on me, I couldn’t complete my objective because they were so furious. I had to load a pre-existing save and haven’t fired an arrow at a chicken since.

Clearly being the Dragonborn means nothing to these NPCs who would lay down their lives for a chicken…well, I suppose they are descendants of dinosaurs so maybe that grants them some privilege?

Not all chickens in games have an entire settlement to defend them. In fact some of them can be quite intimidating and make genuinely challenging foes. For instance, the giant, gold, fire breathing chicken in Gears of War 3 – if you’re not familiar with it, believe me I’m not making this up.

At the start of the game, you leave the helicopter to search an area, there just so happens to be a chicken pecking at the floor, minding its own business and if you shoot at it, it transforms into the giant, gold monstrosity which really shouldn’t shock you given the many weird creatures in the franchise, yet somehow it does. 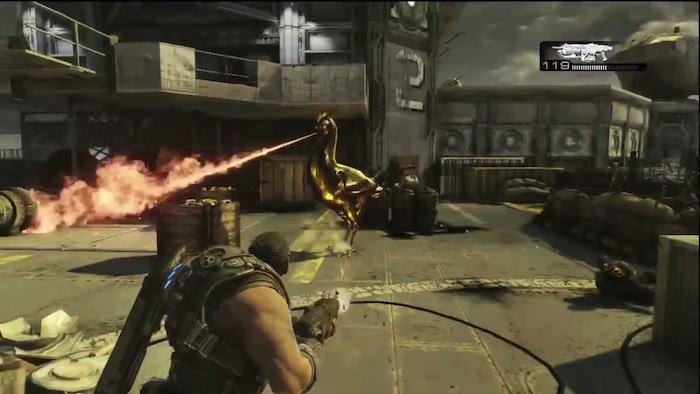 Also in the series is a weapon called the ‘Cluckshot Gun’ which shoots…you guessed it… Ducks. Jokes aside, obviously it does not shoot ducks, it shoots chickens. I’m hilarious. Get over it.

In Gauntlet, if you obtain an item called ‘Pojo’s Egg’ which you can use to temporarily turn into Pojo the fire breathing chicken to burn your enemies to the ground. I never indulged in cheat codes in my youth (unless it was The Sims and I wanted that sweet, Simoleon cash money) but there was a cheat code in Gauntlet enabling players to play as Pojo permanently. 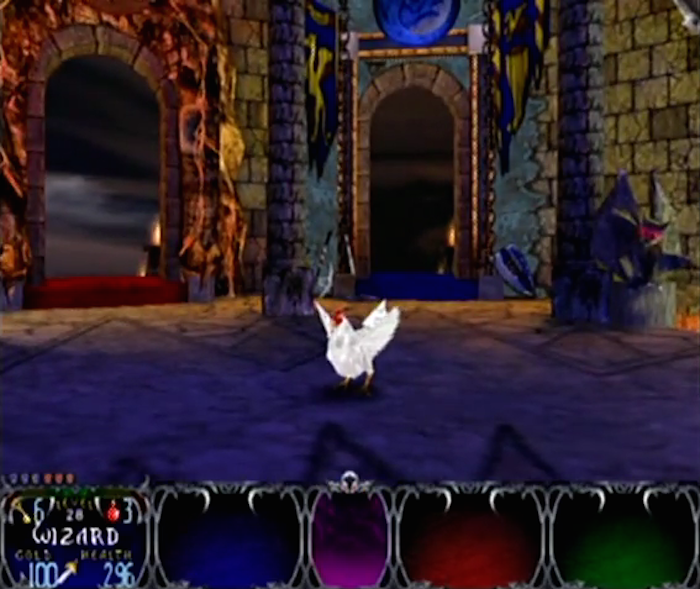 The Wii games, Chicken Blaster and Chicken Shoot have the sole purpose of shooting chickens for points à la Duck Hunt. Except, chickens can’t really fly away like ducks can so don’t really have a chance of escape and I didn’t think chickens were a bird we hunted as a species, we breed them for food. So these games are essentially target practice with living targets. Makes you glad not to be a chicken, huh?

I wouldn’t like to be a chicken in the Fable games either, sure they’re slaughtered for food, raced and they often get underfoot, causing you to kick them out of the way in annoyance but there’s an entire mini-game where the heroine must try to kick one a chicken the furthest distance. 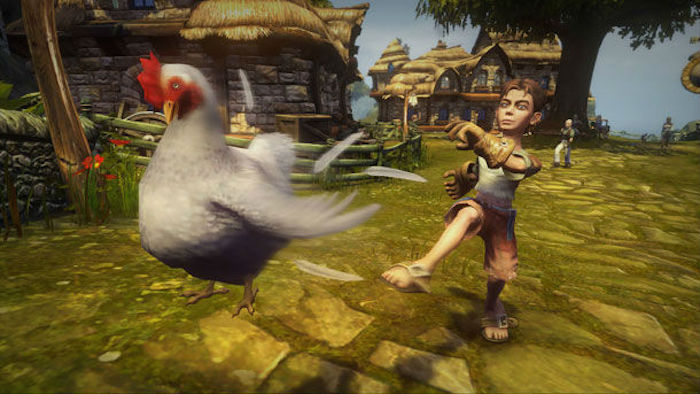 I guess it’s the closest experience to flying that a chicken will ever get so in a way, perhaps we’re doing them a favour by providing a life changing, exhilarating activity for those adrenaline seeking chickens. After all, there are numerous humans who inexplicably enjoy such things as bungee jumping and free falling.

There’s one chicken-centric game that has baffled me for years, it was released in 1993 and is called Alfred Chicken (I can imagine the creator chuckling at their clever play on ‘Chicken Alfredo’ while people looked on aghast, shaking their heads in disapproval at such a poor joke but maybe they kept quiet because they didn’t want to ruffle any feathers…huh? HUH?). The point is, this game is weird and doesn’t make sense, though that seems to be a running theme of late 80s and early 90s games, I mean a blue hedgehog who can run fast? 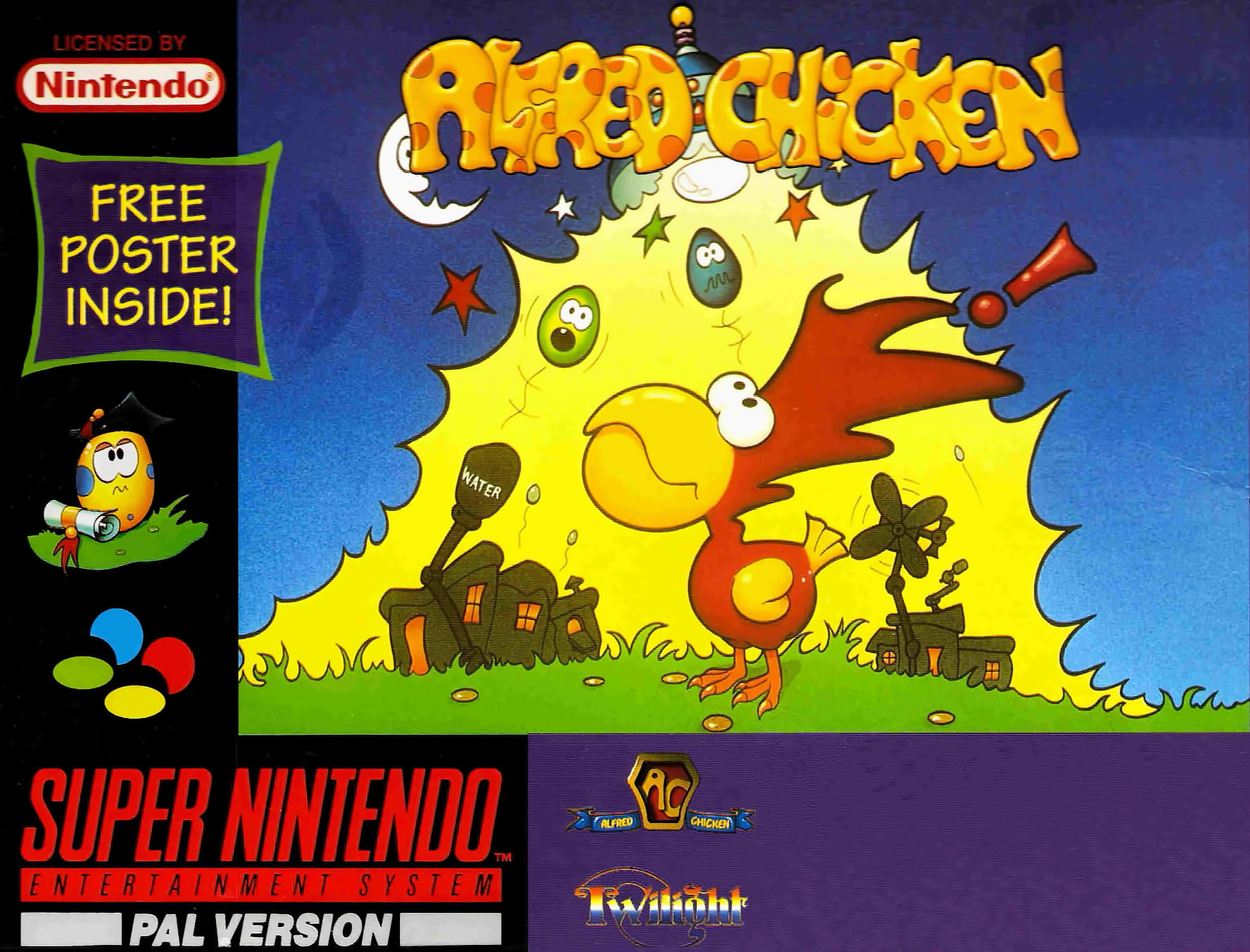 Digression aside, in Alfred Chicken, you play as a chicken (called Alfred, no less) who must peck balloons to complete a level while avoiding bizarre objects. You also answer secret calls for a giant flower who eventually gifts you jam, which somehow turns Alfred into a weapon, granting him use of a bomb. Because, reasons.

Maybe that’s when our relationship with gaming chickens changed, they became a weird in-joke for gamers and so now we have giant gold chickens, weird chicken costumes/skins and uninspired, obvious ‘cock’ jokes in games like Grand Theft Auto: San Andreas. 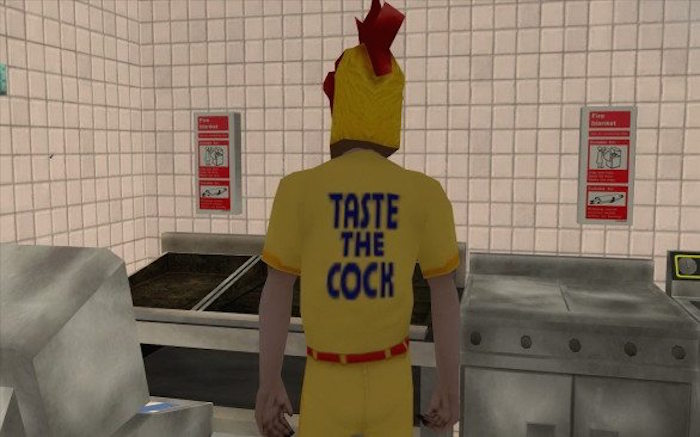 Then again, some of the chickens in games are so formidable I wonder if it’s a commentary on their treatment in the real world, what would chickens like to do to us humans as recompense for our treatment of them? I mean, the Evil Chicken in Runescape dishes out some serious damage and has become somewhat of a legendary creature who is hard to defeat without having a level of at least 110. There’s an entire wiki-page dedicated to it where it’s described as cannibalistic and megalomaniacal. 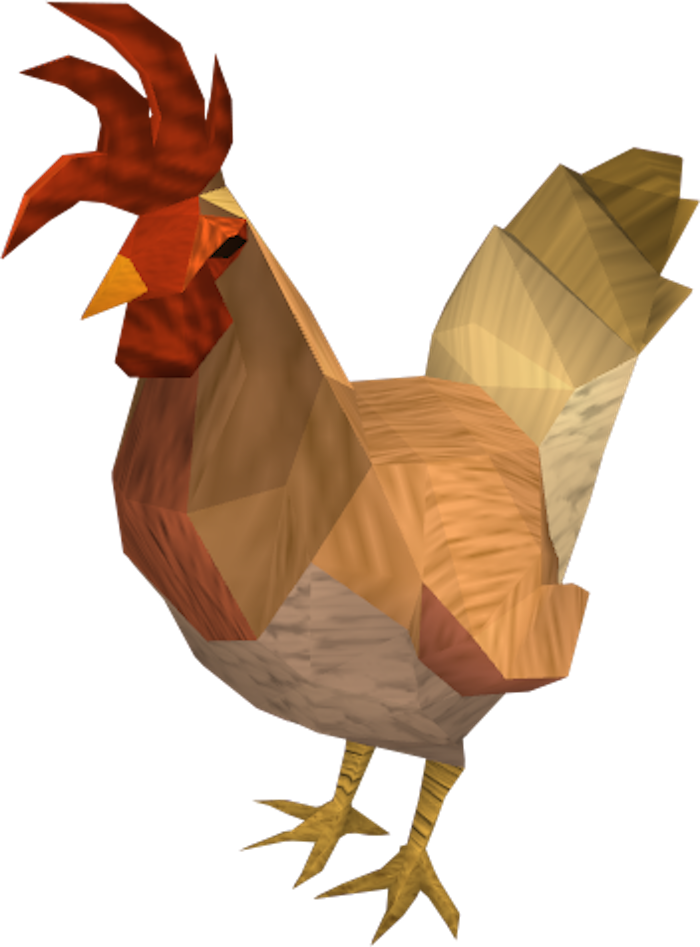 Speaking of which, there’s an add-on for The Sims 3 called Fowl and Feathers Chicken Coup which features an evil chicken called Charles. You have the option to feed and tend to your chickens of course, but there’s another option ‘Fight With Charles The Evil Chicken’. Choosing it leads to Charles the chicken with his beady, glowing eyes to viciously attack your Sim. 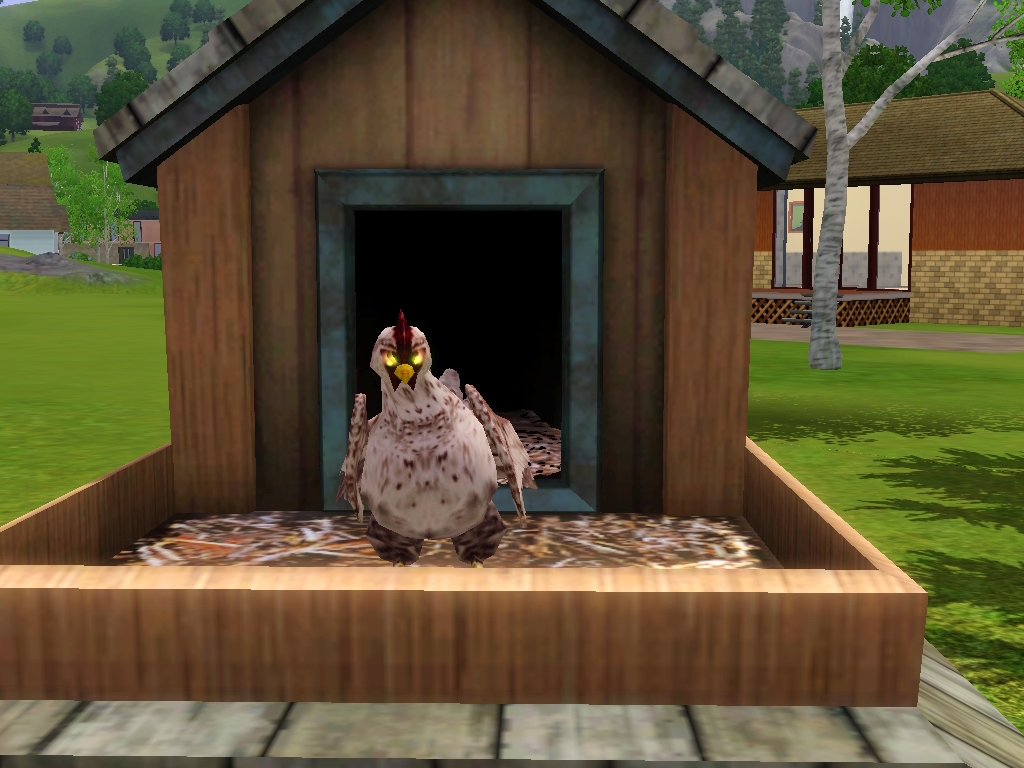 It’s not our fault chickens have become an icon of unnecessary evil in gaming, whether they are ported as evil or we’re just evil towards them. There are Trophies and Achievements that actively encourage us to kill poultry. Modern Warfare 2 has an achievement for example called ‘Colonel Sanderson’ because why use up your ammo on enemies when you could be killing defenceless caged chickens instead?

Clucking clucks. We should probably feel sorry for you, with your pointless wings that cannot sustain actual flight but taste so, so good and your continued oppression by human kind. But you could at least show some damn respect by not getting aggressive when we feel like throwing you or firing an arrow at you! I jest, I jest… and definitely not in fear of an evil chicken uprising one day.

In this article:History, Poultry, Video Games