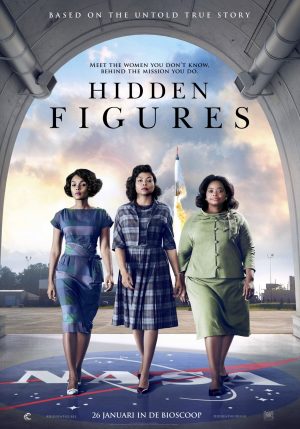 When given an uplifting period tale it can be easy to slip into a saccharine-sweet retelling of known events. But a strong ensemble cast, upbeat score courtesy of Pharrell Williams, and excellent pacing make this a thoroughly enjoyable film even with it straightforward story.

Hidden Figures, adapted from the book of the same title, is based on the true stories of three black women out of the many who were employed as human computers at NASA to provide the calculations for the space program in the 1960s. Each woman’s story details the struggle of overcoming Civil Rights era societal roles in order to utilize their unique gifts in a rare industry where talent can provide an opportunity to escape station.

In the very first scenes the mathematical brilliance of Katherine Johnson is detailed. A childhood version of herself solves a quadratic equation on the blackboard in front of her classmates, all several years her senior. Clearly, this is a mind to be reckoned with. We then fast forward to adult Katherine (Taraji P. Henson), and her friends and Langley coworkers, Dorothy Vaughn (Octavia Spencer) and Mary Jackson (Janelle Monae), all gifted with numbers but each with different ideas about where it will take them.

Following the journey of the women, director and co-screenwriter Theodore Melfi gives us three distinctly different viewpoints regarding dealing with the racial politics of the 1960’s at NASA. The most ambitious in this line comes from singer turned actress Janelle Monae, who holds her own against her seasoned co-stars with grace. Mary Jackson’s ambition to be an engineer at NASA (a position that would require finding a way to take advanced classes at a whites-only night school) has Monae’s screen time crackling with the lightning of barely withheld anger and drive. Her stunning looks and precision in delivering pointed one-liners adds a sharpness to scenes that would otherwise lag.

Dorothy Vaughn has the goal of being promoted to manager, a position she is already doing for the black computer pool without title or recognition. Spencer shows her strength in this type of character with her expert code switching. The authoritative organizer to her black female coworkers quickly becomes overly polite and deferential in the presence of the manager of the white computers, a cool and dismissive Kirsten Dunst. Her thinly veiled exasperation at Vaughn’s inability to be happy with her station provides an illustration of how white attitudes played into the lives of black coworkers without being cartoonishly vilified. Although this role may immediately call to mind Spencer’s excellent showing in The Help, it is impossible to not enjoy her growth over the course of the movie even with its familiarity.

The film, however, centers around the transformative performance of Henson. Her shy but sturdy Katherine would be unrecognizable to those who only know her as the brash Cookie on Empire. Placed as the first computer of color with a team of exclusively white male engineers, her reliance on mathematical acumen for confidence and solace is palpable. Clever costuming choices, such as her jewel-toned dresses that stand out considerably in a sea of white shirts, black ties, and gray slacks, heighten her otherness but in a way that makes her standout like a flower amongst snow. It’s one of the many technical aspects that add to the experience.

The film also gives us a glimpse into the many roles she juggles, from a loving mother tucking her daughters into bed after a long day at work, to pious community member attending church on Sundays where she is courted by a dashing Mahershala Ali. While trying to charm her at the church picnic, he makes the mistake of downplaying her abilities. Though she must remain demure at NASA as a second-class citizen, Katherine steps up to the plate (or in this case, suitor) to upbraid him in a restrained but direct response that demonstrates Henson’s ability to dismantle a person without ever raising her voice.

The growth of the character is similar in composition; never a roar, but always a quiet power and pure intention that provides strength under the surface. Save for one terrific outburst in the second half of the movie, Katharine always displays certainty and strength rather than pride and disdain. The joy of the performance is watching the dance between ordinary and extraordinary, and Henson balances it perfectly.

Anyone walking to the theater knows that John Glenn successfully made it into space so there is little suspense in the movie, but the struggle of the women to create paths for themselves where there were none is enough to be engaged even when you know the ending. There is no denying that this is a “happy history” feel-good movie for the holiday season. But there’s also no reason that designation keeps it from being an excellent film.