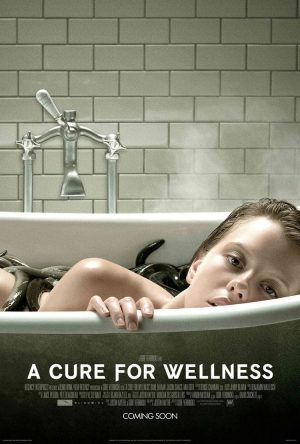 Is it our physical health?  Our mental state? Our success and wealth? Our social standing and class? An inexplicable combination?

What makes us “well” is but one of the many mysteries that exist within Gore Verbinski’s A Cure for Wellness, a film that proves itself a perfect fit for the arguably visionary director, whose eclectic career has spanned the first three Pirates of the Caribbean films, Mousehunt (1997), The Mexican (2001), The Ring (2002), The Weather Man (2005), Rango (2011) and The Lone Ranger (2013).

From slapstick to horror, animation to effects-driven blockbusters, Verbinski has established himself as a highly productive and polished filmmaker with a knack for turning out efficient, if not extraordinary cinematic works (haters will hate, but The Lone Ranger is damn impressive).

A Cure for Wellness, however, is the first film of Verbinski’s that truly feels tailor-made for his storytelling sensibilities and visual panache. The film is a beautifully shot affair of psychological horrors that focuses less on things that go bump in the night, and more so on what lurks deep within us all.

Captured by the lens of Bojan Bazelli (who previously collaborated with Verbinski on The Ring and The Lone Ranger, as well as shooting last year’s magnificent Pete’s Dragon), the film provides a feast of dark delights among its gorgeously composed frames. So much of this film is perceived through an eye that expertly blends haunting distances and uneasy close ups. It employs an almost-perfectionist sense of symmetry that always feels menacing and never quite right. Characters are captured through reflections, distortions and magnifications, via unique angles aimed at mirrors, or through half-filled drinking glasses, or from under water. Verbinski never feels satisfied to direct this story in a conventional manner, and the unorthodox nature of A Cure for Wellness is what ultimately makes it so great.

The story itself is where many will ultimately find faults, but for every moment where the screenplay finds itself silly and straining, there are two moments where the story is clever, cunning and at times even terrifying.

Dane DeHaan stars as Lockhart, an ambitious young executive sent to retrieve his company’s CEO from a strange “wellness center” atop a hill in the Swiss Alps. Once he’s arrived, it seemingly becomes impossible to escape, and Lockhart finds himself trapped in a situation and place that is never quite what it seems.

Viewers will certainly pick up on visual and plot-related echoes of Martin Scorsese’s Shutter Island, but on a thematic level the film has more in common with the director’s most recent film, Silence. Allegories and nuances of faith, mortality and the horrors of man maintain a stubborn presence throughout the film. Putting aside its periodic follies, this is a tale that insists you dwell on its many intricacies after the fact.

It’s also worth mentioning that DeHaan, with this film, has set himself up for grand opportunities as a leading man. (Drawing back to Shutter Island, this kid seems poised to become the next DiCaprio). With his chilling yet handsome stare, intimidating screen presence and a dynamic mix of reserved calm and unhinged chaos, DeHaan irrefutably dominates the screen.

A Cure for Wellness is a strikingly ambitious work—one of the most daring and inspired mainstream releases of recent memory. Its aesthetic palette is German expressionism remixed with gothic shades of Guillermo del Toro, and its story mirrors the chilling tones of horror pioneers like Poe and King. The voice is all Verbinski though, and this time he’s louder than he’s ever been before. It feels like witnessing the work of a talented builder previously limited to just a hammer and a couple of nails. A Cure for Wellness gives Verbinski the entire toolbox, and the construction is all the more masterful because of this.