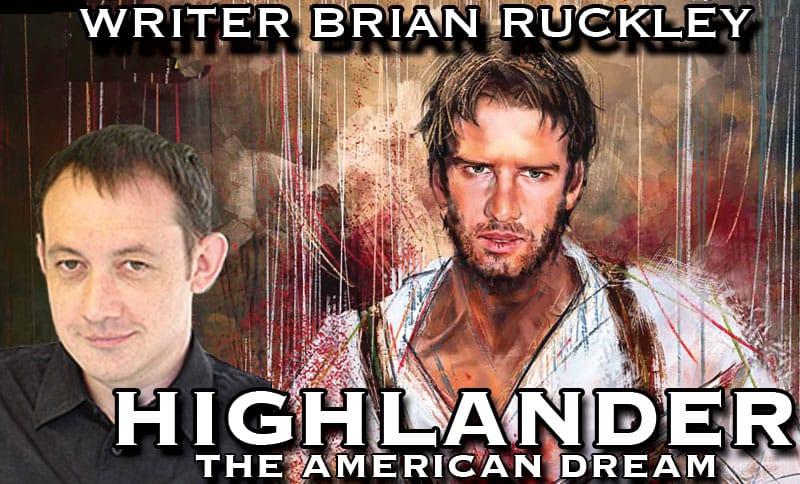 His latest comic book series, Highlander: The American Dream, a prequel to the original film, is available today.

Brian took some time to discuss the series, his desire to explore the character of Rachel and working with artist Andrea Mutti.

FOG!: Brian, besides being a Scottish fantasy writer, how did you get involved writing the new Highlander series?

Brian Ruckley: I’ve been in contact with some of the IDW folks for a while, talking about various things, and I wrote a Rogue Trooper comic for them a couple of years back. Denton Tipton was the editor on that, and I guess when the Highlander assignment landed on his desk he just thought it might be my kind of thing. Which it is. So I pitched an idea, and here we are.

The series is set in 1985 and is a prequel to the original film.  Where do we find Connor when this series begins and how different is he from the character that we meet in the first film?

In terms of timelines, this story more or less begins in the Civil War era and runs all the way up to 1985. I think it’s probably fair to say that early on, Connor doesn’t have his act together quite as much as he does by the time we get to ‘original film Connor’. It’s hardly surprising that someone who lives for centuries, and goes through some of what Connor goes through, would have his ups and downs. Being an immortal, without knowing exactly how or why you are what you are, living – hiding, most of the time – amongst mortals, seeing all that stormy history, it’s bound to put your mental state under quite a bit of strain.

So it’d be fair to say Connor’s not in an entirely fantastic place, mentally and emotionally, when the series opens. Some of what I wanted to do with the story was look at how and why he moves on from there.

Will we see other characters from MacLeod’s past like The Kurgan and Ramirez?

For sure. I wouldn’t want to say exactly who and when, though, for fear of spoilers.

Although one major character that I will call out is Rachel. I don’t think she really got quite as much of the spotlight in the original movie as she probably deserves. She sees, and knows about, more of Connor’s life than almost anyone, so she really should be kind of key to understanding him. I knew from the beginning that I wanted her to have a big part in any Highlander story I told, and as the series goes on she gets steadily more involved. 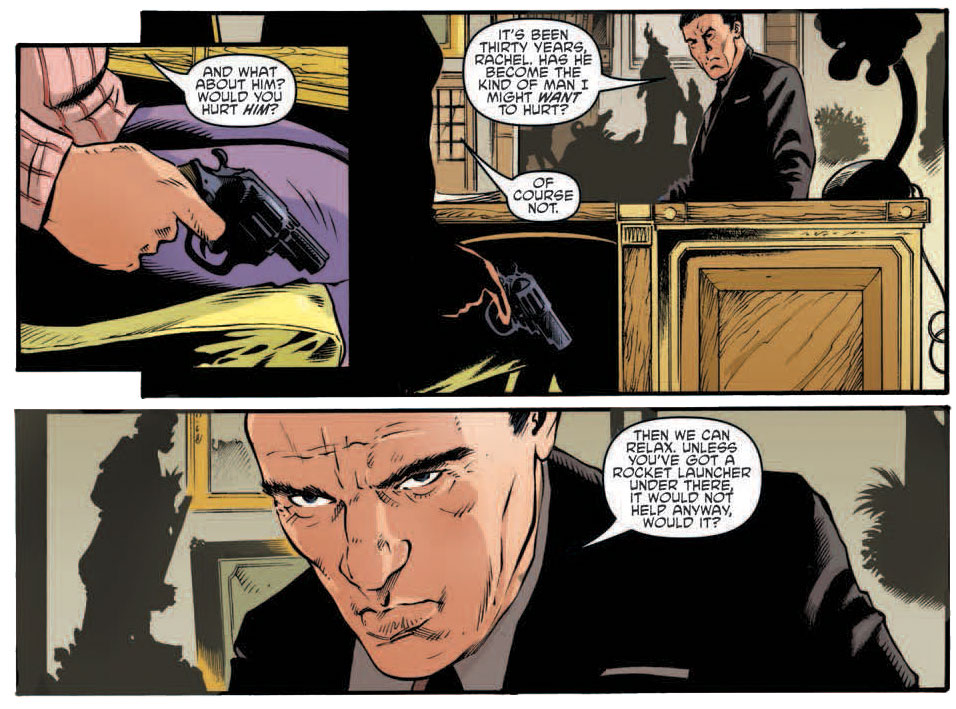 Much of MacLeod’s life prior to 1985 hasn’t been chronicled.  Are there any particular eras that you’re looking forward to utilizing?

It’s no exaggeration to say that within seconds of hearing this series was a possibility, I thought ‘Oh, I’d want to do the 1950s’.

Two reasons for that. First – and I’m dead serious about this – I really, really wanted to see immortals dressed in sharp 1950s Mad Men-style suits. You know, nice hats, nice ties, that kind of thing. Preferably dressed like that while wielding swords. Just seemed like an inherently cool visual. And having seen some of the art that’s coming, I still think it is.

Second reason’s a bit more story-related. I always figured World War Two would have been a big deal for Connor. He found Rachel in Europe in the middle of the fighting, he saw just how dark things could get when the wrong guys were calling the shots. For an immortal who hasn’t just heard about centuries of history but lived through it, the first half of the 20th century would probably seem like some sort of insane culmination of all the potential bad stuff in humanity. I wanted to see Connor in the aftermath of that, and see what effect it had had on him.

Artist Andrea Mutti has a tremendous gift for capturing historical periods.  Are you writing anything to his particular strengths or was it just a great match creatively?

My working assumption with Andrea is that he can draw anything, from any time period. As far as I can tell so far it’s an accurate assumption, since nothing I’ve thrown at him seems to have fazed him. He might well be cursing me in private, of course, but you can’t tell from the art! 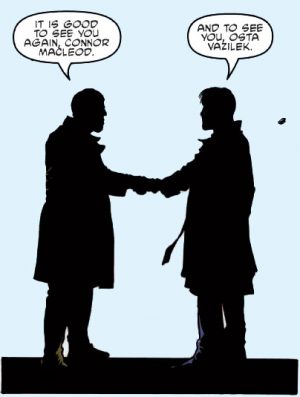 For a writer, doing a story that takes place over better than a century of vast changes is just fun. For an artist, it’s hard work. But Andrea’s a history fan as well as a talented artist, so he makes it look easy on the whole. Horses, muskets, cars (from a Model T Ford to 1980s NYC taxis), Civil War uniforms, Mad Men suits, a monk or two. It all comes out looking as good as you could ever hope. The guy’s good at what he does.

If you had to entice a Highlander fan to check out the comic in five words, what would they be?

Pretty much all my media consumption operates in arrears. I’m almost invariably months or even years behind on stuff, just because (a) there’s too much good stuff around these days and (b) there’s not enough time around these days.

As far as comics are concerned, I’ve got loads of series that I’m gradually working my through in the probably vain hope I might one day catch up to current issues. Semi-random examples: BPRD, various bits of Valiant output, a few Image series like Lazarus and Revival, Jason Aaron’s Thor epic, Paul Pope’s Battling Boy and Aurora West stuff. All sorts, really.

TV, I follow streaming drama series, like everyone else these days. No binge-watching, though. One episode at a time, just like the good old days. Top of the list of stuff I’m working my way through at the moment would probably be The Crown, The Expanse. Also partway through a re-watch of Luther, and being floored all over again by the unanswerable question of how Idris Elba manages to contain so much charisma and screen presence without melting or something. Oh, and I’d also give a shout out to Travelers: enjoyed it way more than I expected to, and thought it was a pretty unusual and occasionally very smart and subtle way of approaching the whole tired old time travel lark.

As far as music and movies are concerned, I’m so out of touch it’s laughable. Lucky if I get to the cinema a couple of times a year, and to be honest generally prefer TV to movies when it comes to streaming. I haven’t even seen The Force Awakens yet. Seriously. Does that mean I don’t get to be a geek any more? 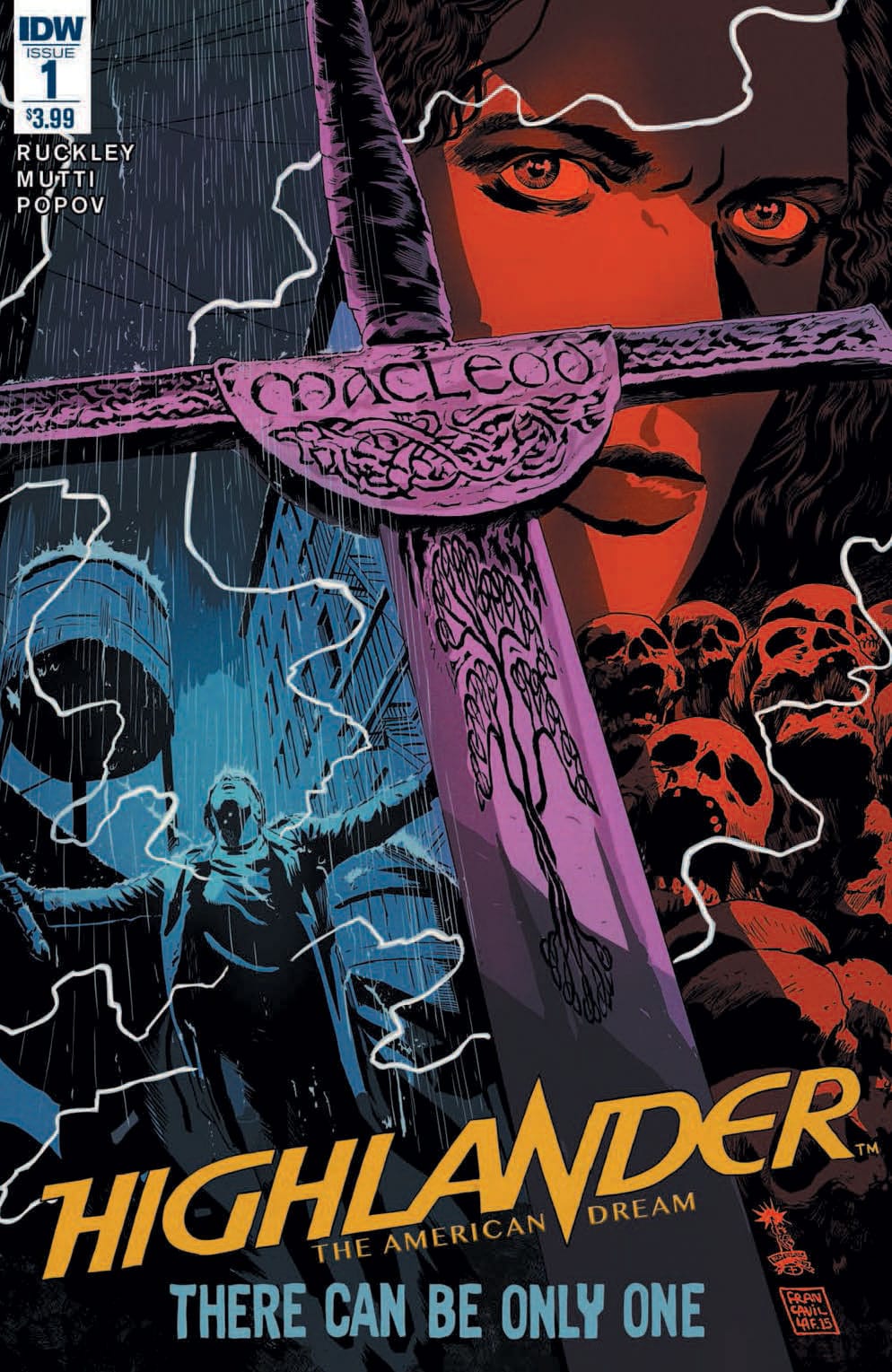 Highlander: The American Dream #1 is available in stores and via digital today.