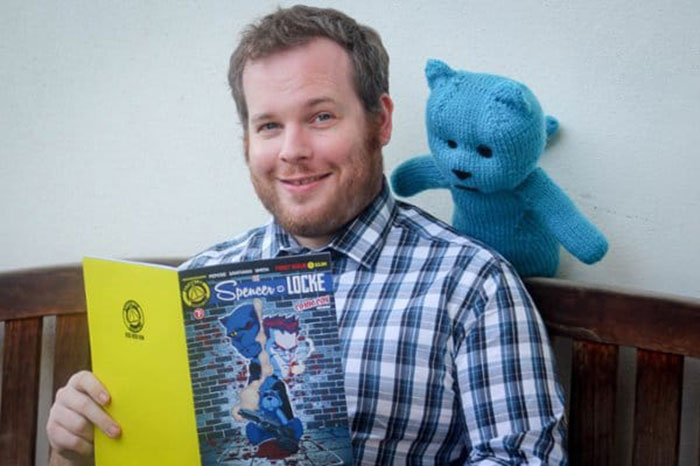 A hard-boiled detective. A brutal murder.  And a six-foot-tall imaginary panther.

llustrated by Jorge Santiago, Jr., Spencer & Locke follows Detective Locke, who returns to the scene of his horrific upbringing when his grade-school sweetheart, Sophie Jenkins, is found dead in a lonesome back alley. But when Locke’s investigation dredges up menacing figures from his traumatic past, there’s only one person he can trust to help him close the case — his childhood imaginary panther, Spencer.

David took some time to discuss the book, it’s genesis and the book’s influences.

FOG!: On it’s surface, Spencer & Locke is “Calvin and Hobbes” Meets “Sin City”, but after reading the first issue, it’s much more than that. What was the genesis of the project?

David Pepose: First off, thank you so much for saying that! Spencer & Locke is a story about Locke, a hard-boiled cop who returns to the scene of his harrowing upbringing to investigate the murder of his childhood sweetheart — and the only friend he can trust is a talking imaginary panther named Spencer. And like you’ve said, so much of our story comes from this high concept of “what if Calvin and Hobbes grew up in Sin City?”

But our story is also more than just the sum of our inspirations — this gritty noir black comedy is also full of action, suspense, and also an examination of trauma, depression and mental illness. Artist Jorge Santiago, Jr. and I wanted to create a book that used as many different sequential art storytelling tricks as possible, and once I had this idea of mashing up the aesthetics of two of comics’ greatest cartoonists, it was really heartening to discover we had a much deeper story on our hands. 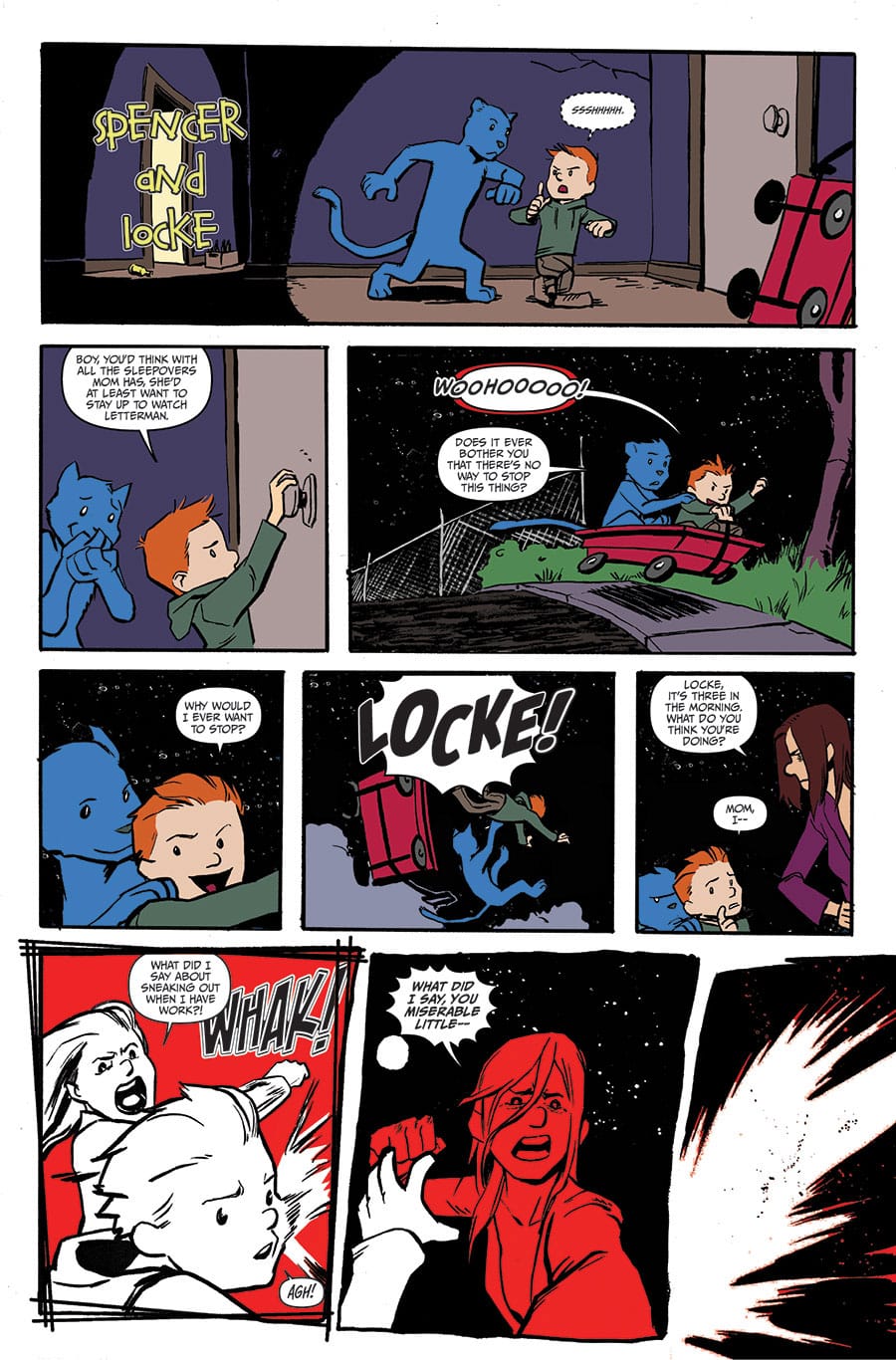 Were there any concerns with the high concept pitch being based on two iconic comic properties? You draw from both, but it’s very much it’s own thing. With both inimitable influences in the background, were there any challenges in the book having it’s own voice?

It’s funny, because I do remember showing our written pitch to one publisher, who said it was “the best pitch I’ll never publish.” So I think there was definitely some skepticism about whether we could pull off the concept! But Action Lab immediately believed in us, and I think that really inspired Jorge and I to bring out A-game on every page. 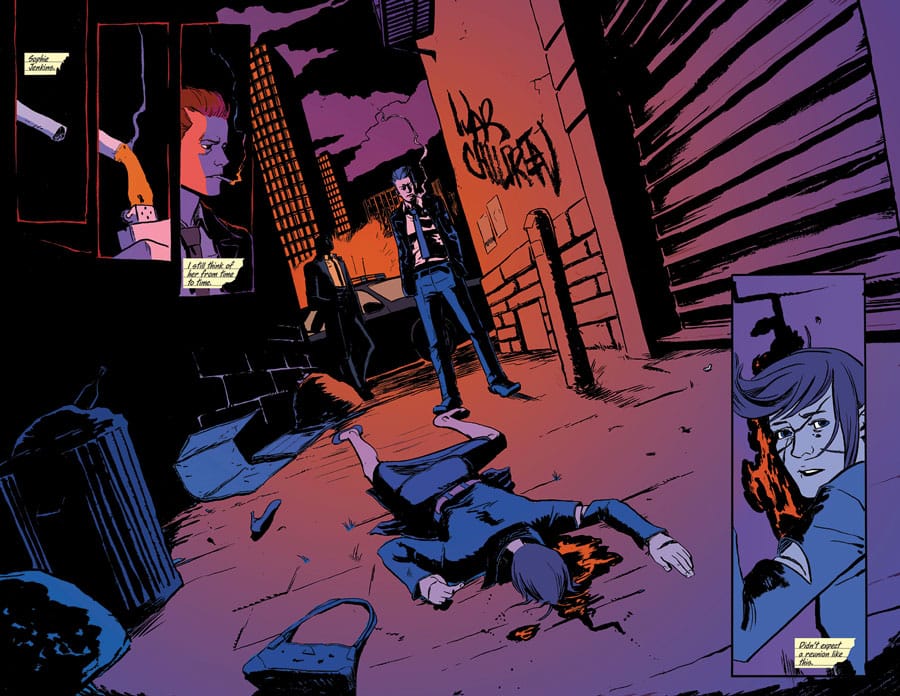 For me as a writer, I actually found the juxtaposition of this dark crime story alongside this deceptively cute (but occasionally even more horrific) childhood story actually balanced each other nicely — if we ever were in danger if getting too depressing and too bleak, we’d be able to inject in flashbacks or this buddy-cop banter between Spencer and Locke to lighten up the mood, and whenever I was feeling stuck in terms of adding some flair to our action, I found adding that sort of Frank Miller poetic violence to the Calvin and Hobbes iconography really yielded something special.

Ultimately, getting into our characters’ heads and learning their voices was the most fun part of this project, but drawing from Watterson and Miller was kind of like being able to play one parent against the other — if Mom isn’t giving me what I want, I’ll just turn around and try my luck asking Dad for the same thing! 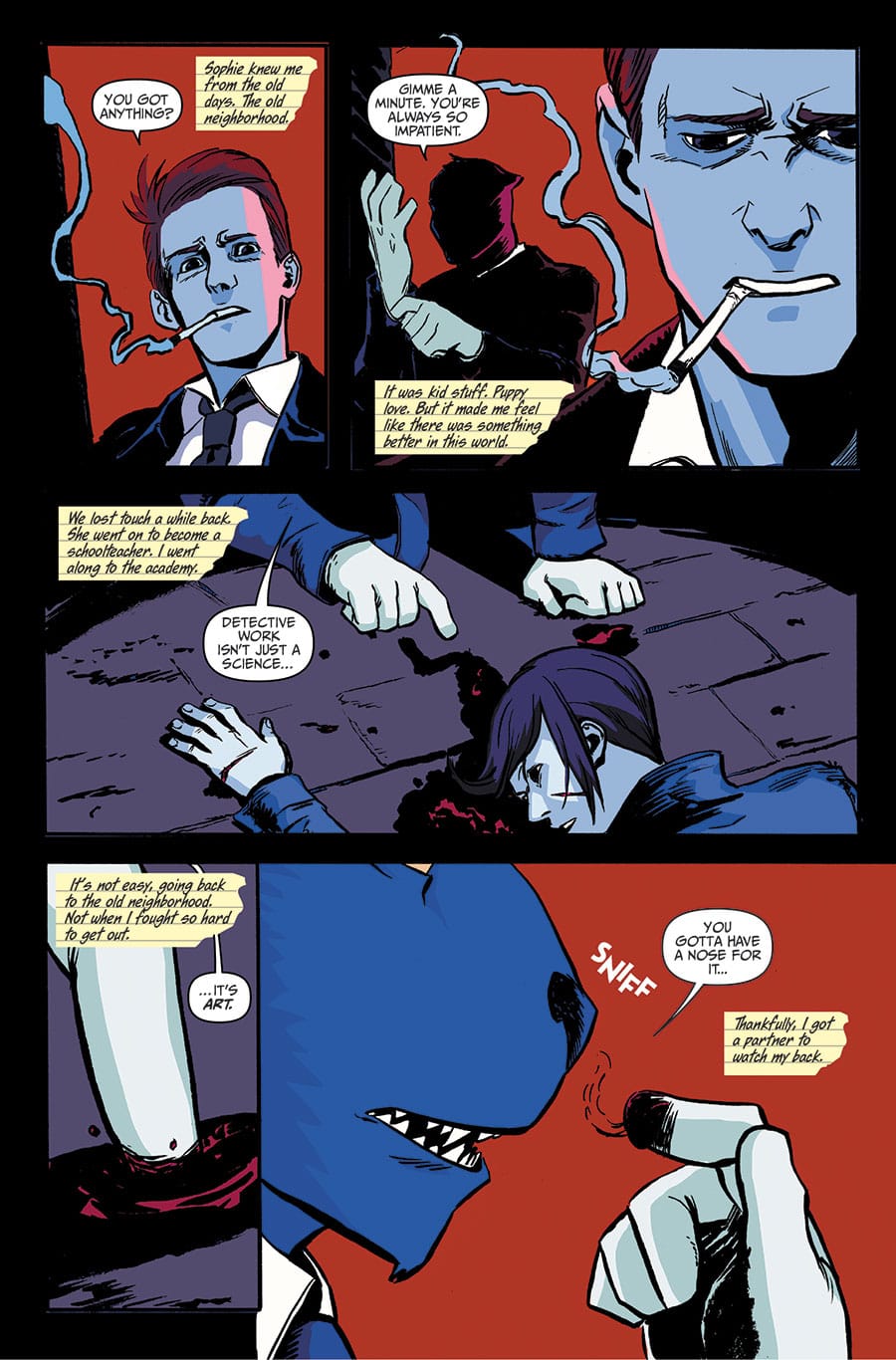 How did you hook up with artist Jorge Santiago, Jr.? What do you think he brings to the project?

I felt it was really important to work with someone who was as young and hungry for their first published work as I was, and with that in mind, I found myself looking through portfolios from graduates of schools like the Savannah College of Art and Design. I was just immediately struck not just by how talented Jorge was — his art reminded me a lot of Becky Cloonan’s style, just very fluid and clean and expressive — but he was also clearly passionate about the process and craft of making comics.

And Jorge’s thoughtfulness really came through in our designs, our action sequences, even the subtle shift in styles between our modern-day scenes and our flashbacks revealing Spencer and Locke’s rough-and-tumble past. He’s an extremely talented and versatile artist — he can make a dialogue scene in a car look just as engaging as a hard-hitting action sequence, and due to the structure of Spencer & Locke‘s plot, each issue has its own unique visuals that Jorge knocks out of the park. It was really important to us that each issue stand on its own and have something cool to offer, and so much of that rests on Jorge and our colorist Jasen Smith’s ability to sell it. 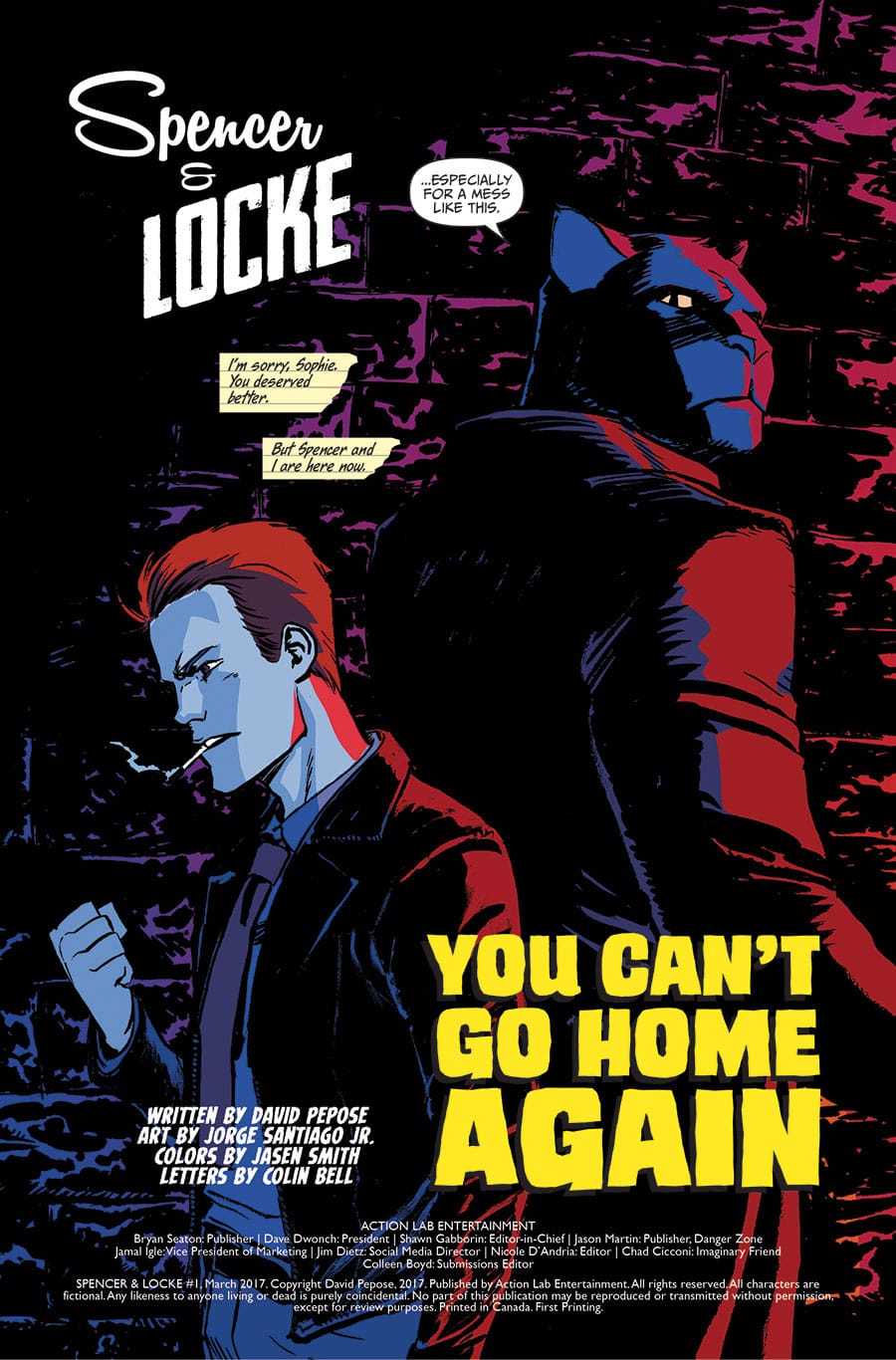 Calvin and Hobbes had a very limited supporting cast. Are there other homages from other strips going to show up?

That’s a great question, to which I wish I had a better answer! All I can say is… not yet.

But the plus side is, there is actually a really rich mythology and iconography that Calvin and Hobbes had that we’ve been able to draw inspiration from, showing how Locke will be tested physically, emotionally, and psychologically. Our series is all about having to confront the scars and demons of one’s own past — no man is an island, as they say, and Locke’s upbringing didn’t take place in a vacuum.

Now that Spencer and Locke are back in the old neighborhood, there are plenty of old friends and foes waiting to come out of the woodwork. 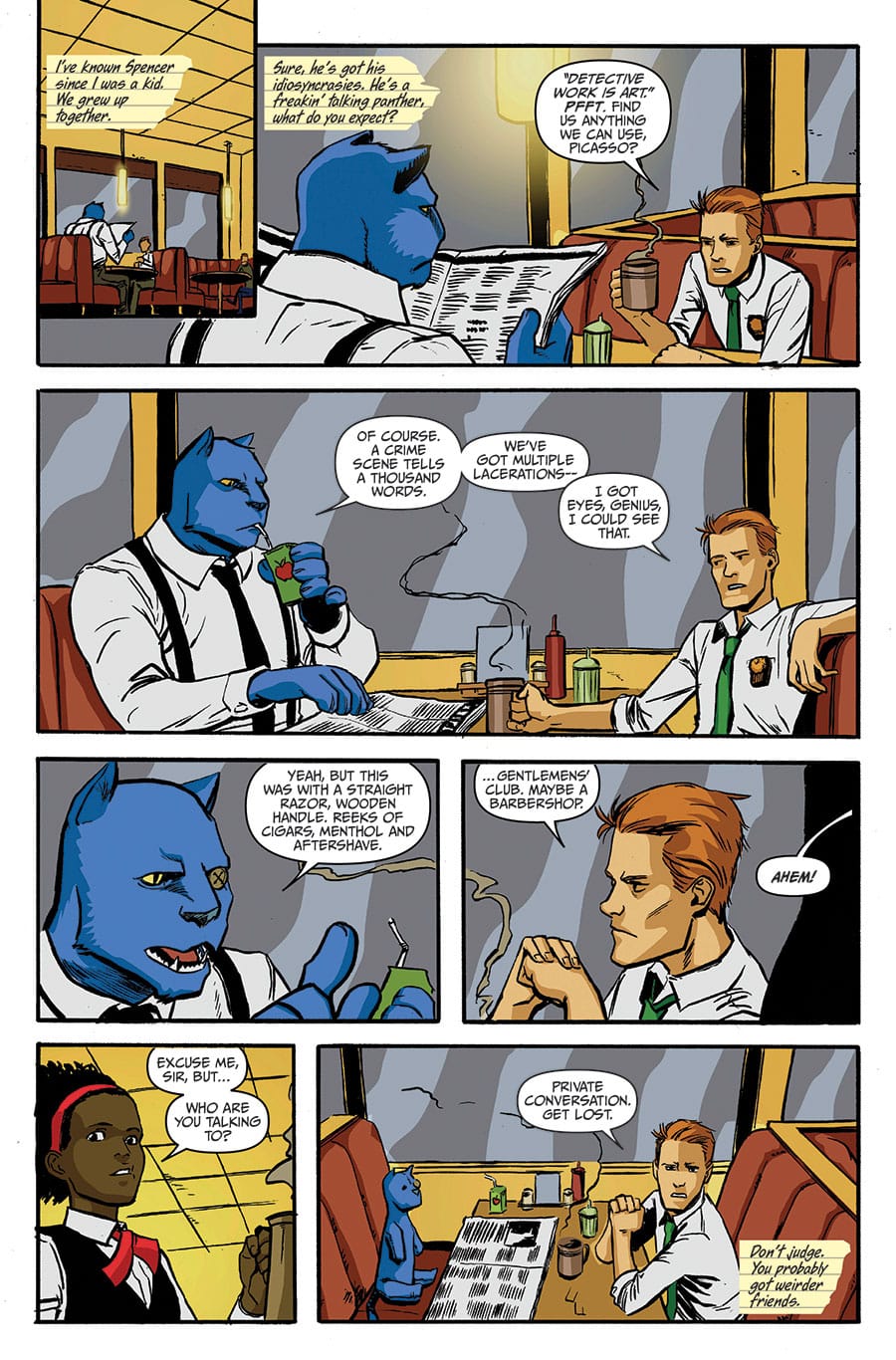 But if there’s a demand for more Spencer & Locke and people pre-order the book, well, let’s just say there’s a wider world for these characters to play in, and I already know exactly where they’d wind up. So readers, call your local comics shop, and help me help you!

In addition to Watterson and Miller, who or what else is an influence on your work?

While Bill Watterson and Frank Miller were the biggest influences on Spencer & Locke, I’ve been really fortunate to learn from a lot of great writers, some of whom were kind enough to impart their wisdom first-hand. Dan Slott’s knack for characterization. I learned a ton from Greg Pak about theme and structure when I did an interview with him years ago. I did an interview with Nick Spencer that taught me a ton about subverting reader expectation.

And then there’s just stuff I’ve learned second-hand by writing about comics for years, by following writers like Grant Morrison, Geoff Johns, Devin Grayson. And I’d be committing a great disservice if I didn’t give a tremendous shout-out to Ed Brubaker, whose work on Criminal was the secret third godfather for all things Spencer & Locke.

And then there’s also tons of movies, comics, TV shows that influenced this book — movies like Memento, Fight Club, Pulp Fiction, shows like True Detective and House, comics like Tradd Moore’s Ghost Rider, ‘90s Batman, old-school Wolverine. It’s funny, because the more I answer this question, the more influences become apparent to me!

Oh man, there’s lots to geek out about right now! In terms of comics, I’m really digging Champions, Dennis Hopeless’s work on All-New X-Men and Spider-Woman, Detective Comics, All-Star Batman, Southern Bastards, God Country… on the TV side, I just finished the season finales for Crazy Ex-Girlfriend and The Good Place, both of which were spectacular, and I never miss an episode of The Flash. (And This Is Us, which let me tell you, is such a great, heartfelt show.) In terms of movies, I’m really excited for Lego Batman and Logan to come out. But the thing I’m geeking out the most over is just waiting for April 26, when Spencer & Locke #1 hits comics stores nationwide! 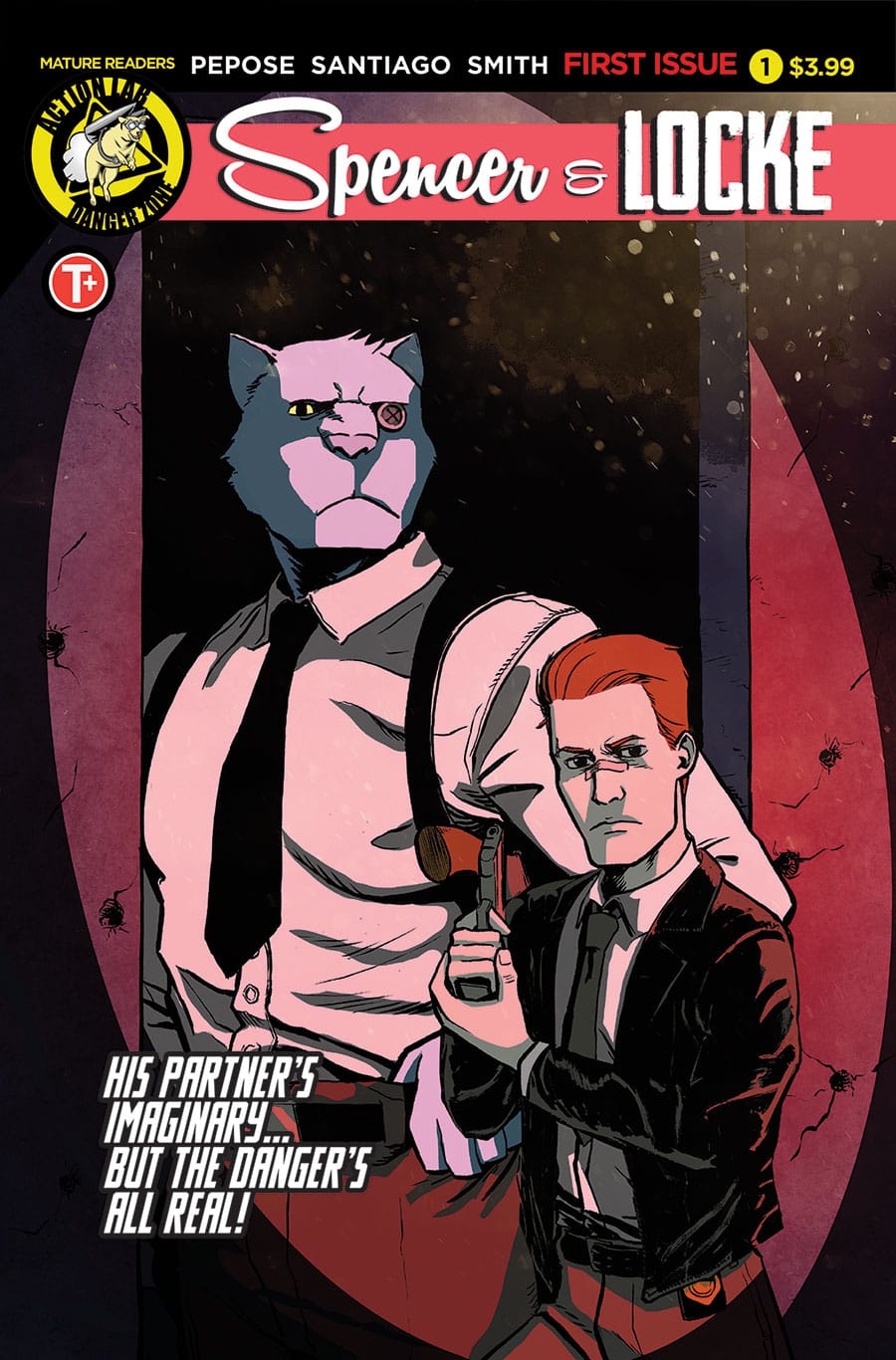