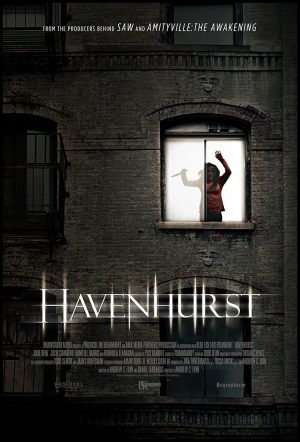 When middle aged recovering alcoholic Jackie takes a room in an old fashioned apartment complex turned half-way house its not only for her recovery.

It seems that Jackie’s friend, Danielle, previously had an apartment in the building, but she mysteriously disappeared, and she’s not the only one.  As Jackie investigates it appears that the building has many secrets such as hidden nooks and passageways, and the people who run the building are very keen to make sure the residents complete their rehabilitation and stick to the rules.

Havenhurst is, if nothing else, an extremely ambitions feature film with complex storylines and characters; but I can’t help but think that something didn’t quite translate from script to screen.

Now in fairness I am not trying to bash this film, Havenhurst is a very interesting film with good acting, likeable characters, and a fantastic premise. Plus, on the technical side the film’s cinematography and art direction look wonderfu,l while the gruesome effects look appropriately awful and in at least one scene are rather shocking.

Nevertheless, I just feel that the dense script, which serviced a complex plot and exposition, as well as it’s connection to real life events, was simplified during production leaving a somewhat intangible aspect of the story slightly unsatisfying.

Overall I found Havenhurst to be an enjoyable and entertaining film with a great location, great characters, and great effects. If you are a horror fan and get the chance to watch Havenhurst you won’t be disappointed.