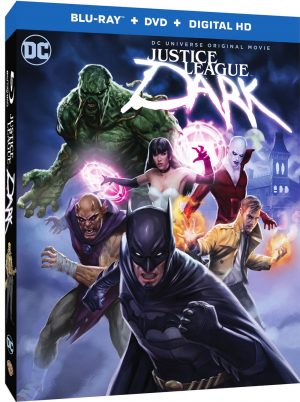 With Doctor Strange bringing the Marvel Cinematic Universe into the realm of sorcery and magic, Warner Bros. Animation does the same with their latest direct to home video offering through DC Comics, Justice League Dark.

DC animated films have been able to hit a lot of notes that their live action counterparts have missed. Of course, the bigger the budget, the larger the amount of creative red tape that will wrap itself around a project such as David Ayer’s Suicide Squad.

Justice League Dark makes great use of its sixty minute run time in setting up the story, introducing the characters and establishing their motivations to get the viewer invested in when the team finally comes together in the climatic showdown. It’s a formulaic approach to storytelling with the key elements executed to their desired result as the film opens with random acts of murder that end up being not so random. The mystical element to these atrocities calls for a different solution outside of Superman and company.

Enter John Constantine, who is quickly sought out by Batman, Zatanna and Deadman to investigate the mystic anomalies occurring around the globe. When you think of Constantine, Matt Ryan immediately comes to mind. His portrayal of the supernatural detective has earned a great deal of praise that has brought him back to the role through multiple platforms. Ryan’s voice acting served the story well here and carried a gravitas in the same vein of Mark Hamill’s Joker or Kevin Conroy’s Batman.

Speaking of Batman, his inclusion in this film has been met with a lot of eye-rolling from those who cherish the source material. The Dark Knight wasn’t a member of the Justice League Dark in the comics. And why would you need a non-powered detective when you already have a magical one in Constantine? It’s obvious that Batman is a promotional vehicle used, which is why he’s front and center on the Blu-ray cover.

I’m happy to report that Batman is a marketing version of a Trojan horse this time around. Batman serves as the bridge to the characters that mainstream audiences might not be familiar with. Once the mission is established, Batman hangs back, helps when needed, and cracks a joke or two while serving as a reminder that this is not a job for “capes and tights.” This prevents his inclusion from being a bait and switch, which benefits the film as Constantine, Zatanna and Deadman are given plenty of room to work.

Jay Oliva, who has directed several DC animated films delivers some exciting action and an entertaining narrative with intriguing twists and turns. Blood, guts and curse words are all wrapped up in a violence-filled package that is worthy of the R-rating that the film is marketed on. There are no sexual suggestive themes or bloodbaths for the sake of shock and awe. All of the gory moments fit the context of the story. There are a lot of moving pieces that are not hard to follow, but still, there is much to absorb.

Besides the story, there were some fun moments such as Deadman sarcastically pointing out the obvious, Batman using a defibrillator to take out a shit-demon, a poker game where both parties cheated, and Swamp Thing. Man, I wanted more Swamp Thing. He looked glorious with great attention to detail with his towering leafy green presence.

Ascetically, the animation doesn’t stand out. It’s not bad, but despite the enjoyable action set pieces, there were no moments that will make you stand up and marvel over the imagery on-screen. There were also a few background blunders with one, in particular, showing Superman standing behind Constantine, only to see that the Man of Steel is nowhere in sight once the shot goes wide. It was annoying because it made me feel as if I missed something.

Gods, Spellcasting, magical stones, a bit of Merlin, and some Batarangs make for an animated DC Comics adventure that is fun to watch but not necessarily worth rushing out to see or buy on release day. Those who came to see Batman save the day might be disappointed if they are not intrigued by the likes of Constantine and Zatanna. Justice League Dark does offer a better than average viewing experience that entertains on many levels while providing a worthwhile introduction to the House of Mystery and its residents.