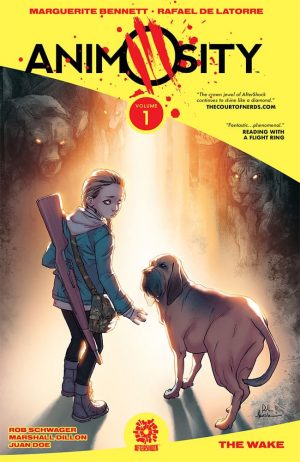 Talking animals have ‘awoken’ in the latest from Marguerite Bennett (Josie and the Pussycats, Batwoman: Rebirth, A-Force) and Rafael de Latorre (Superzero).

Animosity Vol. #1 (AfterShock Comics) follows the adventures of a young girl Jesse and her bloodhound Sandor after a great animal awakening called “The Wake”. This sometimes funny but also dark and brutal look at society and an animal’s place in it goes beyond your standard “What is my cat thinking right now”?

If animals can talk, organize and get revenge on humans, where would their loyalties lie? Would humans be quick to accept animals having a voice and the ability to weaponize and rally? The tension is palpable in this first volume as pressures mount from both sides. Allegiances are formed, there is plenty of blood spilled from both sides, and a war between beasts and people has begun.

Cut scenes go from on-the-nose octopi in a sushi restaurant brandishing blades against captors to a pair of robins talking about their feelings about family planning over a nest of eggs in Central Park. A rich capitalist poacher in a high-rise is taken down by his Bengal tiger, and Sandor needs to stand up to him. And all of this happens in the fast paced, fascinating first issue.

A week into The Wake, Jesse and Sandor’s family fights for survival and her Dad Oscar takes Sandor for a walk to scavenge for food. Mittens the cat is happy to protect Jesse while her dad and her dog are out. Oscar and Sandor face an urban legend and when tensions are high get at each other’s throats. Ultimately, Sandor and Jesse head west, away from the family, to find peace in this brave new world. 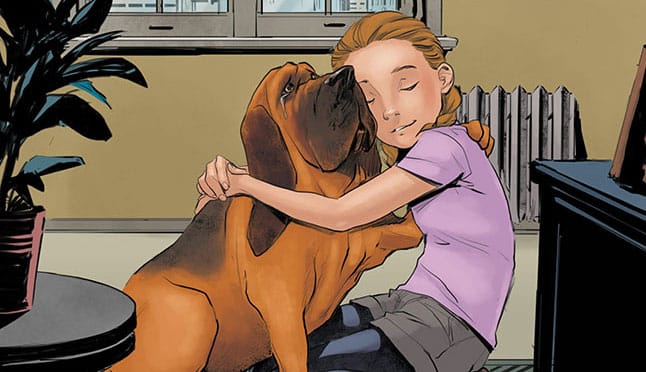 I’d hasten to draw direct comparisons to The Walking Dead comic or universe but there are parallels that might draw certain readers in to this rich universe. No zombies or zombie dogs here, but humans are fending for their civilization after a new set of rules has to be established. Everyone, including and especially the animals are fighting for resources and in a political sense are restructuring society. Let’s be real, folks. The beasts of the Earth greatly outnumber us when it comes to quantity! Imagine if they are all given the right to vote! Holy hell, help me now from picturing tiny voting booths for mice. Great, now you can’t help but to picture that either.

Sandor is a smart and protective hound, wise for his dog age and sole protector of Jesse. When he comes across a highly fortified town led by Gray Wolf Mimico, he’s shown shackled humans, working in service of the town. A pistol packing koala and militarized turtles strapped with rocket launchers face off with The American Military (humans) with mixed results. If Sandor wants to get Jesse out of this mess, they will have to make it to the West Coast alive!

Sandor leads a pack out of there after the melee with a bison, a lemur a humpback whale and more of a brood as they head to San Francisco.

In California, The Wake has manifested itself in a slightly different way than it did on the East Coast and other parts of the world. It is too early to tell in the overall story arc if people have it any better than in New York but time will certainly tell.

Animosity was a great read, one that I couldn’t put down. We all imbue personality into our pets and animals at the zoo. The art and characterizations of the main players were fantastical but dense and believable. This ain’t Zootopia, folks. I look forward to the next volume and seeing how well Jesse and Sandor survive.