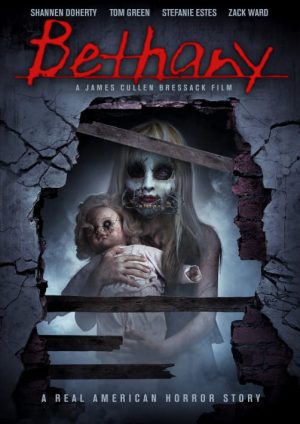 When couple Claire and Aaron inherits Claire’s childhood home she is obviously trepidatious about her return home. It seems that Claire’s childhood was a strange and unhappy one involving an overbearing and abusive mother and having a ghostly imaginary friend named Bethany.

And of course upon their arrival the small strange occurrences begin to pile up.

As the creepy occurrences escalate and Claire’s mental and physical safety is jeopardized the couple begin to assemble the clues to their new house’s mysteries. What they discover unravels the mysteries of Claire’s childhood.

Bethany is an interesting story with a great cast but has some limitations on the technical side. Director James Cullen Bressack and star Zack Ward have written a solid story, which uses elements from other films in new entertaining ways. Meanwhile the cast is good across the board with both leads, Stefanie Estes as Claire and Zack Ward as Aaron, putting in believable performances. The film also features some good performances in smaller roles by Shannen Doherty as Claire’s Mother in flashbacks and comedian Tom Green in the role of Claire’s therapist Dr. Brown.

The weak points of Bethany come from the actual production and execution of the story as the film relies heavily on the visual tropes of the Asian ghost films. A sub genre which were all the rage in the early 2000’s but by now their characteristic quirky ghost movement and creepy look have become overused and cliché outside of their cultural placement.

To make things worse there are jump scare scenes in Bethany that mimic very similar and successful jump scares in other films and now only serve to remind the viewer of better films they’ve seen in the past. It would have better served the makers of Bethany to develop their own visual style and utilize the talents of their make up effects artist Jerami Cruise who has done some very impressive work in the past.

Overall Bethany is a film with a good story and a strong cast that is worth taking the time to check out.

Bethany arrives in theaters and On Demand April 7th.