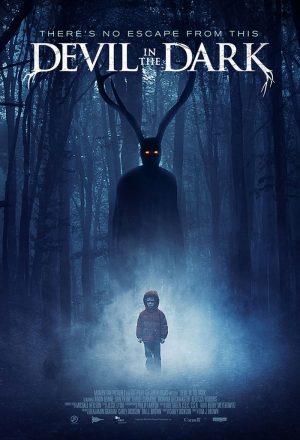 In recent years there has been a slew of films that are technically horror but are, at their core, relationship dramas. The Babadook, Monster, Lights Out, Resolution, Don’t Knock Twice, Honeymoon, Demon, Beyond The Gates, etc., etc.

Most of those films delivered the horror goods while exploring the characters’ relationship issues.

A new film in the sub-sub-genre, the indie Devil in the Dark, does a decent job of exploring the dysfunctional bond between two estranged brothers but mostly misses the boat on the scary stuff, creating a kind of lopsided, unsatisfying glop.

Adam (Robin Dunne) hasn’t been back to his hometown in years but decides to go there in attempt to reconnect with his older brother, Clint (Dan Payne). Clint is an avid hunter and Adam is decidedly not, but the younger sibling agrees to a weekend hunting trip into the woods with his bro.

In an effective prologue, we learn that as a boy, Adam was lost in the same woods while on a hunting trip there with Clint and their dad.

After a desperate search, their dad finds young Adam, but we’ve seen glimpses of a creepy monster deep in the woods.

We’re also given snapshots of the brothers’ childhood relationship and their interactions with their father (Clint clearly has far more in common with his dad than Adam does, but their dad does his best to love them equally).

After a somewhat rambling first act, with Adam meeting up with some old high school buddies and our getting the gist of the brothers’ contentious bond, the two finally head out into the mountains.

The location work at this point is beautiful (the film was shot in British Columbia), and the pace picks up a bit as the bros hash it out and try to reconnect.

Still, we keep waiting: this IS a horror movie, right…?

To be fair, there are some creepy moments and (tiny spoiler) the creature’s lair is pretty cool. But not a lot happens horror-wise and too many occurrences and “rules” are left unexplained.

It makes sense budgetarily to set up a movie this way; by focusing mainly on the relationship at the heart of the film one doesn’t need to rely on expensive visual or make-up effects.

But it relies on the execution. A modern classic like The Babadook got it right due to its excellent script and superb performances, AND it was scary. Also, the horror elements intertwined beautifully with the mother/son conflict and examinations of grief and guilt.

Admittedly, not every film can be as masterful as The Babadook, but the balance between horror and family drama in Devil in the Dark is rather off. Worse still, there’s no real payoff and the film ends with a truly lame “Gotcha!”

Not a bad effort, and worth a look on a very slow night, but Devil in the Dark doesn’t deliver in the end, alas.

Devil in the Dark arrives On Demand March 7th.