The recent release of Horizon Zero Dawn has given me a lot to think about lately, in the game you find yourself in a post-apocalyptic world overrun by robots and mechanical animals. Some of these mechanised creatures resemble animals that already exist and others are…giant, rocket launching, dinosaur robots! I began thinking about how other animals are depicted in games and it prompted me to write about the fictional animals, critters and beasts I’ve encountered over the years. 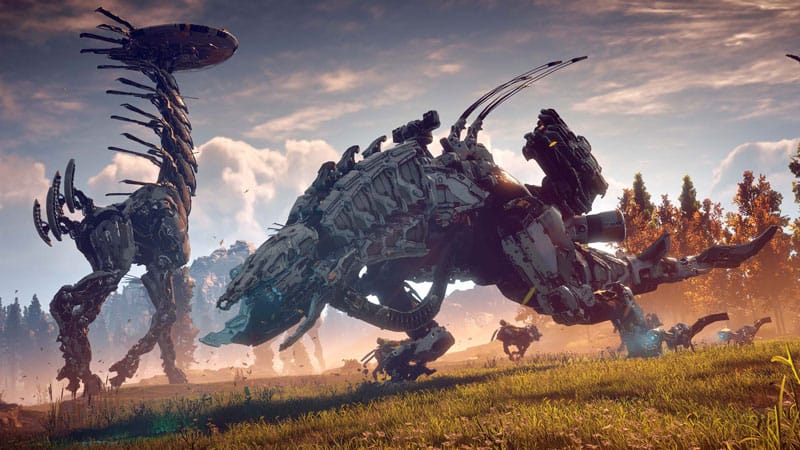 This isn’t about fictional humanoid races like the Asari from Mass Effect, the Argonians from The Elder Scrolls games or the ancient Cetra of the Final Fantasy series, nor is it about anthropomorphic characters like Sonic the Hedgehog or Fox McCloud. More specifically, I’m exploring those fictional creatures that bear resemblance to real animals or are reminiscent of them in some way. This is why one of the first fictional animals that came to mind was a Chocobo.

Chocobos are large, flightless bird-like creatures most often used as transport in the Final Fantasy universe. Final Fantasy creator, Hironobu Sakaguchi has cited Hayao Miyazaki as an inspiration for their design and if you look at the horseclaws in Nausicaä of the Valley of the Wind you can see a definite similarity between the two. It’s said that Miyazaki’s own inspiration came from a prehistoric bird called a Gastornis. 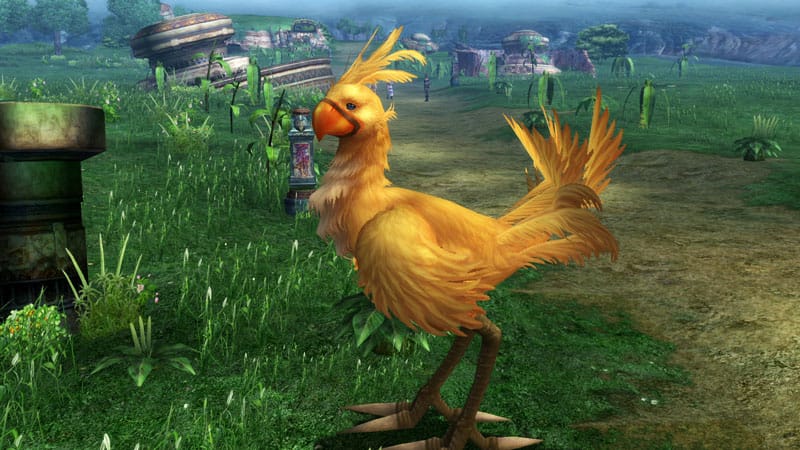 Personally I find horses quite intimidating and so I like the idea of an avian mount, especially if I could have the Chocobo theme music playing every time I rode. The closest real life experience to riding a chocobo you can get is riding an ostrich.

There are even ancient Egyptian hieroglyphs depicting humans riding large ostrich-like birds and some people in Africa still ride them today. Though, if it’s anything like the ostrich riding videos I’ve seen online I can see why it’s not as common practice as it once was. People seem to fall off more often than not, even the professional jockeys…yep, that’s right there are professional ostrich riders!

Moving on from cute, flightless birds to mythical flying beasts, the creatures I’m focusing on next are the Dragons from The Elder Scrolls franchise, though let’s get things straight, technically by definition they are wyverns but the games refer to them as dragons. Admittedly, I can’t say I blame Bethesda for that as ‘Wyvernborn’ doesn’t sound quite as cool as ‘Dragonborn’ does.

You might think this is a controversial choice as these dragons do have a language. However, to most of the regular NPC folk in Skyrim, their language is unintelligible and viewed much in the in the same way as a dog barking at another for example. 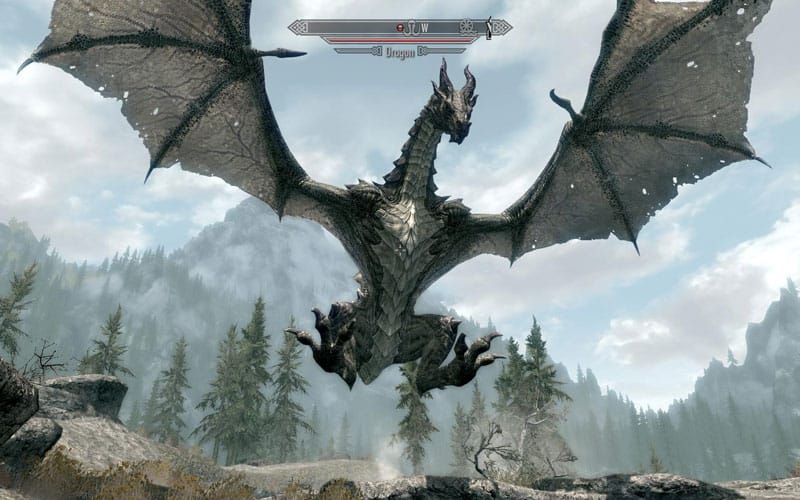 Wait, maybe the dogs of Tamriel do speak to one another, it’s just no one understands or is aware? I mean, Barbas the dog can speak! Though, he is a supernatural being who takes the form of a dog. Hmm, I guess pets of the Ancient Daedra Gods don’t count.

Back to the dragons, they are viewed as fearsome creatures with no reasoning abilities. They exist as predators who wreak havoc on the lives of NPCs living in Skyrim. They destroy crops, homes, whole villages and I’m pretty sure they eat people too. I mean how else do Stormcloak army uniforms end up inside a dragon? On second thoughts, maybe don’t try to answer that.

More terrifying than the dragons that roam Skyrim are the Headcrabs from Half-Life. The idea of a crab-like creature that feeds on your mind and can jump three metres into the air is enough to make me never want to venture onto a beach again. I don’t have a phobia of actual crabs but the existence of parasitic headcrabs would strike fear into my heart…and head. 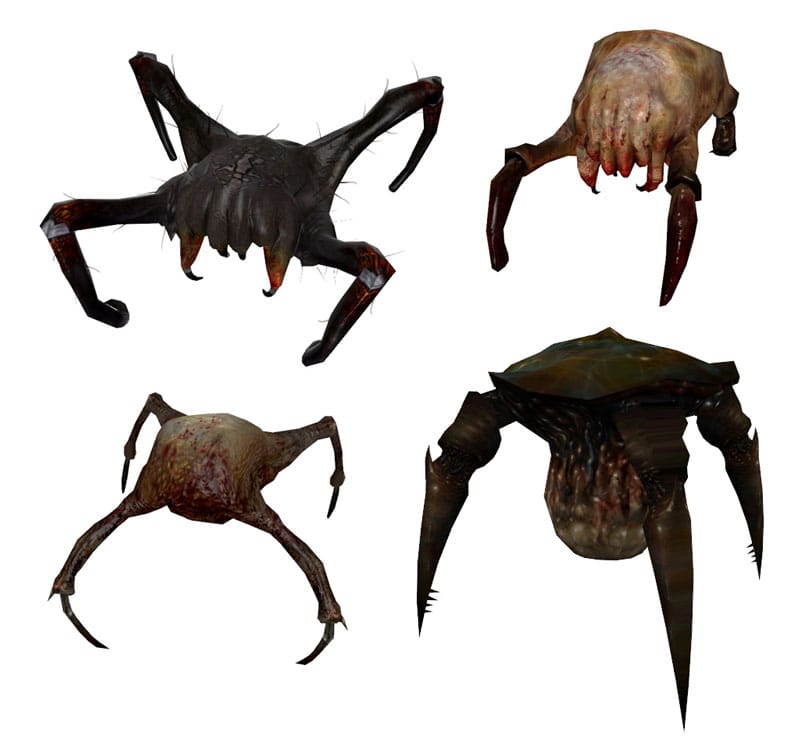 Although there are other parasitic animals in the Half-Life universe, the headcrab is the most iconic and their ability to control their hosts nervous system is a trait which makes them formidable enemies. If they were real, something tells me humanity would fall drastically from the top of the food chain.

I mean, they’re remarkable creatures, resistant to radioactivity and toxicity and they could live practically anywhere and live through anything. However, unlike the facehuggers from the Alien film franchise (which undoubtedly must have been the inspiration for headcrabs), they can be destroyed with a crowbar…looks like our food chain place is secured after all.

Of course one does not simply write about fictional animals without mentioning Pokémon. Cutesy creatures to catch, collect, train and fight. Ultimately it’s all a bit cruel to trap animals in a tiny balls and battle them against one another but as someone who used to also watch the cartoons as a kid I remember several episodes that were focused on saving or helping out wild Pokémon, some of whom, as recompense for Ash’s kindness became good friends with the group. It was about friendship, guys. Isn’t that just beautiful? 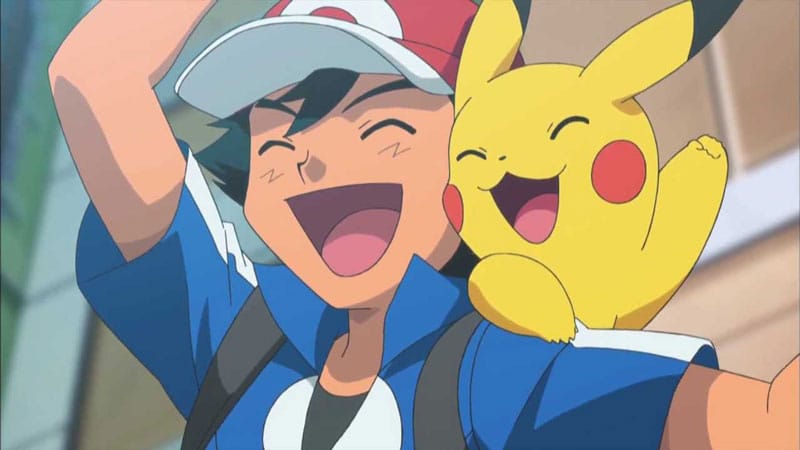 Perhaps the most iconic of the bunch is Pikachu but they each have their own unique personalities and attacks. If they were non-fictional and living in our world, we’d be admiring Persians in zoos alongside the lions and tigers or freaking out over cute baby Eevee videos on YouTube. Just think of all the interesting pets we could have too. Oh man, I’d totally want a Snorlax to snuggle up to during my Terrace House Netflix binges!

Then again, despite their cute demeanours, they’re all dangerous animals meaning we’d have to deal with things like fire breath, electric currents and poison. I’m not sure that’s a world I’m happy to live in, we have enough problems right now as it is. I don’t want to live in fear of being stung by a Beedrill or find myself face-to-face with an Onix.

Finally, there’s the various fauna in No Man’s Sky. This is a game with multiple procedurally generated animal species. Of course I can’t name any of them specifically unless I find them on an undiscovered planet and name them myself. However, what’s amazing about the fauna in No Man’s Sky is that there are 21 genera, meaning the game can spawn millions of different animal variants! And I thought 802 Pokémon weren’t enough! 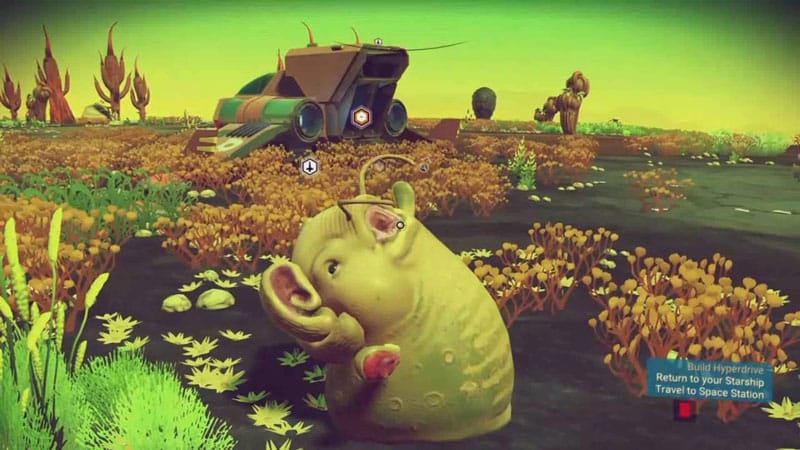 Despite the sense of wonder and discovery, players often describe the game as lonely due to the fact that you can’t see any other players and in a game that has a possible 18.5 quintillion planets to explore that’s understandable. That said, you can tame various creatures by feeding them and in return they will find you resources, mine minerals or ward off hostile creatures.

Sadly, you can’t take your companions with you, no Pokéball-esque technology exists in this game but the fact you can have part-time pets is kind of sweet I guess? Or is it that you’re simply abandoning your new best friends when you go from planet to planet? They might look slightly derpy or weird but that’s no excuse for abandonment!

I’m definitely a terrible person, I spent an inordinate amount of time arguing with myself over whether or not to include Moogles on this list (I’m sorry, kupo)! I didn’t in the end because I saw sense. Although they may look like adorable mole/bat hybrids they do possess sentience, even if it does vary with each moogle. Some are shop owners or deliver the mail whereas others can be less talkative or exist as soul-less plushies imbued with magic.

In Final Fantasy X, the character Lulu uses black magic on a moogle doll to make attacks for her and in FFXV, a squeaky giant moogle can be used as a decoy for the characters which raises some rather problematic race issues within the Final Fantasy universe. I feel the urge to start a petition for the equality of moogles #MoogleEqualityKupo 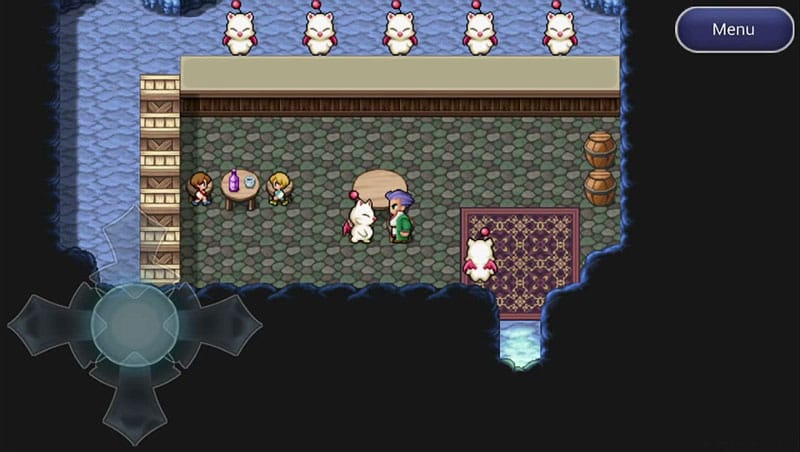 In fact, this whole piece could easily have become a debate on sentience in animals, speciesism or animal rights but I didn’t feel like inciting the wrath of PETA and it’s a heavier subject than I usually deal with.

However, for those of you inclined to do extra reading (I’m usually that person), the philosopher Peter Singer has written plenty of essays on the subject. Maybe it’s another subject for me to write about another time, let me know in the comments section if that’s something you’d enjoy.