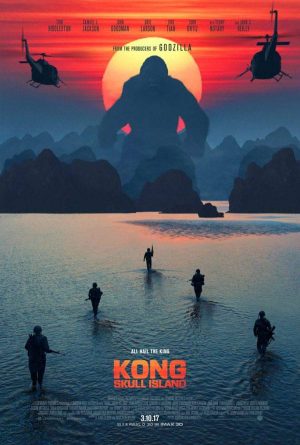 I went into Kong: Skull Island with little to no expectations.

My thinking was that as long as I got a lot of giant gorilla destroying stuff and fighting dinosaurs and monsters, then I would be happy.

What I wouldn’t have expected in a million years is “King Kong: Or How I Stopped Caring and Learned to Embrace The Heart Of Darkness and Moby Dick.”

To say this is a straight up rip-off of the classic Joseph Conrad and Herman Melville stories about obsession and tragedy is putting it lightly. Moreover, the direct lifting of scenes, themes, and visuals from the two most popular adaptations for the two works, 1979’s Apocalypse Now directed by Francis Ford Coppola and John Huston’s 1965 Moby Dick start off as a cute homage, but quickly degrade into blatant stealing. My two favorite “homages” were the jump cutting of close-ups from Samuel L. Jackson’s eyes to Kong’s and then back to Jackson’s. It was a real Captain Ahab moment.

Actually there were like three Captain Ahab moments. But who’s counting. And the other being the entire Helicopter attack/battle with Kong.

Straight out of the gate the film makers don’t dawdle, from the moment the 6 Bell UH-1H “Huey” choppers along with two escort helios take off from the fighter to the point where the team of explorers drop “seismic bombs” aka actual bombs to survey the land then meet up with Kong, the entire sequence is rife with straight up lifts from the most famous helicopter attack on film in Apocalypse Now. The fact that the film takes place during the tail end of the Vietnam War was not lost on me as well, how could it?

The director and writers basically sent the audience a singing telegram announcing their intentions right off the bat. I have to give them props though. The helicopter sequence was beautiful to watch. Right down to the reel to reel tape player blasting Creedence Clearwater Revival as they approached the Island. I guess using Wagner would have been a little too much?

Speaking of directors and writers, I am really not sure what director, Jordan Vogt-Roberts was going for, but after seeing the list of his previous works I am pretty sure it has to be comedy. An action comedy for sure but heavy on the comedy. International or not because I laughed. I laughed A LOT. I almost had an asthma attack, I laughed so much.

Three different writers, Dan Gilroy (Nightcrawler), Max Borenstein (Godzilla 2014) and Derek Connolly (Jurassic World) were responsible for this film. One can only assume that one was tasked with reading The Heart of Darkness, one had the daunting assignment to distill Moby Dick down to a cliff notes and the last was responsible for watching every Vietnam war movie and transcribing all the choice dialog and tropes. What they ended up with was a sort of B-movie monster movie wrapped in a $200 million dollar shell with a screenplay what makes a John Milius written film seem like Jane Austin.

Every character is the patented adventure movie cliche. Tom Hiddleston is basically the same character that Adrien Brody played in the 2005 Peter Jackson King Kong film except that his name in the film is, wait for it, Conrad. I’ll just let that sink in. Samuel L. Jackson is Samuel L. Jackson complete with Samuel L. Jackson lines from other movies like “Hold on to your butts” and the prerequisite Sam Jackson motivational speech. Brie Larson is basically wasted as the anti-war photographer who is out to get her Pulitzer Prize winning photo on the island only to have a change of heart when she meets the people of the island and has a touching (literal) moment with Kong. For all you fans of the 2014 Gareth Edwards Godzilla you will be happy to see John Goodman as the MONARCH government agent obsessed with discovering and proving the existence of a M.U.T.O. or Massive Unidentified Terrestrial Organism, thus tying this film directly into the Godzilla universe.

Last, but definitely not least is John C. Reilly as the Dennis Hopper-esque, Robinson Crusoe type character who has been stranded on the island since WWII. The rest of the cast is filled out with one dimensional scientists, the token Asian, and a group of walking cliche army guys, like the plucky, funny complaining private (á la the late Bill Paxton in Aliens ) to the grizzled tough as nails self-sacrificing sergeant who has a heart of gold, this film had a check list of things to cover and it wasn’t afraid to use it.

Industrial Light and Magic were top notch with their visual effects as usual, and I couldn’t stop staring at Kong’s eyes and face animation. I had numerous chances to what with all the close-ups of his face looking mad, pensive, sad, vicious. The fight scenes were all fun to watch and hit me right in the “Creature Double Feature” feels (for those of you who lived in the greater Boston area in the 70’s and early 80’s).

This movie was completely entertaining and if you are looking for a great throwback to the popcorn-filled, Saturday afternoon action-adventure monster movies of the past, this is it. This is it in spades. I was completely entertained and a little surprised at just how funny it wound up being. Whether intentional or not, this film was hilarious. Stupid, over-the-top, and insultingly poorly written, but fun.