*SPOILERS* if you haven’t seen Logan.

James Mangold’s Logan is, before almost anything else, an R-rated movie. The film goes out of its way to sever heads, drop swears, and even two more breasts than any other superhero movie that doesn’t have Ryan Reynolds in tights. In this way, Logan establishes itself as an edgy counter to mainstream comic book films – particularly Marvel’s sanitized hero presentations.

Throughout the film, it becomes more and more clear that Logan isn’t merely setting itself apart from other comic book movies as a cash grab; it’s legitimately trying to make a statement on the comic book film genre as a whole.

Logan Is A Western

James Mangold, who previously directed the 3:10 To Yuma remake, considers his movie a classic Western. Relatively early in the film, there’s an extended moment where the characters watch scenes from the classic Western, Shane.  From this, we can extrapolate this film as the primary inspiration behind Logan. The other major motivation was Mangold’s desire to watch Wolverine separate endless body parts from their bodies.

And indeed we can see many comparisons. Evil-twin Wolverine (X-24) wears a black tank top to Logan’s white tank top mirroring the “black hat vs. white hat” of classic Westerns including Shane. The movie itself is primarily set in the deserts of Mexico and North Dakota, on the outskirts of “civilization.” Thematically, both Shane and Logan deal with an aging “gunslinger” whose violent past is at odds with the community they’re trying to protect.

Unsurprisingly, both of these men fail to incorporate themselves into a stable family unit, no matter how hard they try. While both movies note that men of violence are sometimes important to a community, they’re not really men that can build a true family. While Logan, Laura, and Professor X band together into a little ragtag family for awhile, it ultimately fails and is mired in tragedy. Their attempt to civilize even ends up murdering a “real” family – the Munsons.

Logan Is A Latter-Day Western

Okay so Logan is a Western. Who cares? What does that add to the story? Why didn’t we get to see Logan dual-wield revolvers? Well, just as Shane signaled the end of a genre that couldn’t last forever, Logan too wants to be remembered as the film that marked the end of comic book movies.

Comic book movies are today’s Westerns. Not necessarily because they cover the same ground thematically, but because comic book movies have become established genre films that follow certain sets of rules and work to meet audience expectations with each film. Both genres are also uniquely American in a way that few film genres are. And like Westerns were in the 30s and 40s, comic book movies are immensely popular and lucrative.

But, of course, Westerns are popular no longer and movie audiences have moved elsewhere. Latter-day Westerns saw the end coming and often commented on what they saw as the state of the Western genre.

Similarly, Logan‘s brutal violence and self-awareness within the comic book genre structure hearkens to Sam Peckinpah’s The Wild Bunch, which, like Shane, is as much about Western films as it is about the actual plot of the movie. The heroes of The Wild Bunch are old cowboys past their prime who go on one last brutal, suicidal mission. They hope to pay penance for their violent sins and to “end well.”

Whereas previous Westerns tended to come across as a little sanitized due to a lack of violence and simplistic themes, The Wild Bunch was notable for having more violence and nudity than almost any movie before it, Western or otherwise. It used this shock value to contrast the “fun” violence of previous Westerns with the horror of real-life violence. To Peckinpah, the way Westerns dealt with violence had become dated and potentially even harmful, especially in light of brutal wars like Vietnam.

Logan too ups the ante on comic book movies by increasing the violence and giving the film a real darkness and grit. Logan’s daughter/clone Laura loves her some X-Men comic books (an in-universe example of sanitized stories). Logan is furious at the Laura for reading what he says is only maybe 25% true and dangerously unrealistic.

The comic book film genre loves to show extreme violence sanitized by a lack of gore in order to stick to a PG-13 rating. Just like The Wild Bunch before it, Logan uses violence to show the sickening reality of what superhero violence would be like in real life. Even when Marvel films like Captain America: Civil War bring up the unfortunate implications of super powered beings, it’s still done in a very bloodless and fun way. Logan wants you to feel the brutality of killing. While there is still something innately cool about watching Logan slice people like a well-trained sushi chef, there’s a weight to all this death. It’s something to be feared and avoided.

Ironically, previous X-Men films used Logan’s invincibility to make light of violence. But by the events of Logan, everybody Logan has known and loved is basically dead. Violence isn’t fun anymore. And of course, Logan is killed in the end, further proving his point that unlike comic books real superheroes can’t just come back to life whenever is convenient. Death is permanent. In Logan, Wolverine himself is representative of older films in the genre, and like Wolverine, comic book movie’s invincibility is a façade that can’t last forever.

But Logan’s commentary extends much further than a simple comparison to Westerns.

Mutants have Lost Their Potency

Like Wolverine for older comic book films, other mutants in Logan represent individual movies in the genre. The old, popular mutants are either already dead or well on their way. Professor X can’t control his brain powers without drugs, and Logan walks with an unhealed limp. These two were once titans of their industry, but are now worn out. While a little of their old power remains, it’s only a matter of time before they’re put out of their misery. The world no longer cares for these mutants and, by extension, their films.

Mutants inject themselves with a shot of a serum for a temporary return to strength, but the effects don’t last long and offers diminishing returns. Too many of these “shots” will kill Logan outright. Similarly, while successive comic book movies give themselves “shots in the arm” with new locations, heroes, and set pieces, they’re only delaying the inevitable as audiences are beginning to tire of the standard formulas.

Good “Mutants” Can’t Be Built In A Lab

Characters in Logan address the issue of disappearing and dying mutants by creating new mutants in a lab. Whereas all previous mutants were “organic,” these new mutants are 100% cooked up by scientists from the DNA of old mutants. These new mutants are highly unstable and are considered to not really be useable.

Again, we see how these mutants are stand-ins for latter day comic book movies. Whereas earlier movies organically created outstanding films with compelling characters, later films try too hard to tread the same ground. Every new villain is some second-rate Joker from The Dark Knight and every new hero’s primary personality trait is “sarcasm” á la Tony Snark.

But both the later mutants and comic book films have something scientists – and studios – don’t want them to have. The hint of a “soul.”

They Want To Build “Mutants” Without A Soul

The scientists decide their created mutants are unusable due to a lack of bloodlust. The have too much of a soul left. The scientists take the creation process one step further and build direct clones out of older mutants’ DNA, but remove any scraps of humanity. In Logan, this results in black-tanktop Wolverine X-24, who kills Professor X and essentially puts an end to the last vestiges of the older mutants. He literally kills the last goodwill of the older movies.

The souls of comic book movies are the directors. Auteur directors once had true creative control over their films and used it to great effect. Christopher Nolan, Sam Raimi, and Jon Favreau have been replaced with no-name directors who do exactly what the studio wants. The “cinematic universe” is built at the expense of the individual films.

Obviously, X-Men movies will continue, but Wolverine’s story is over. Logan asks the audience to consider whether the genre itself can survive much longer. Should studios continue to pump out increasingly derivative movies with aging stars and dwindling box office returns, or should they go out with a bang and run off to Canada never to fight again? ‘ 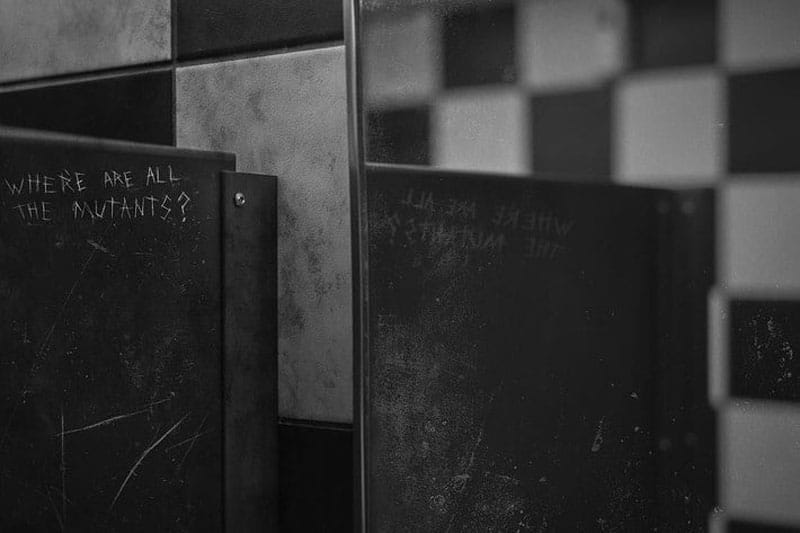 Logan itself doesn’t seem quite sure as its ending can’t seem to quite close the door all the way on its heroes.

Maybe it should have.