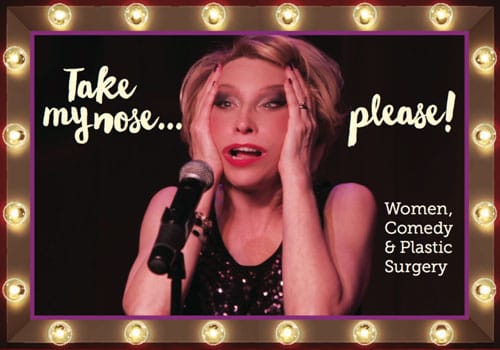 Take My Nose…Please! is a ascinating documentary follows two comediennes – Emily Askin and Jackie Hoffman – as they separately wrestle with the idea of undergoing plastic surgery.

There are some very interesting bits of history here: we learn of Suzanne Noel, one of the very first French plastic surgeons, who was an active feminist who would often perform facelifts for needy women for free in the 1920s. This wasn’t for vanity in most cases; women at the time could lose their livelihood if they weren’t young-looking and attractive.

She, in turn, became interested in plastic surgery upon seeing the results of an operation on the famous actress Sarah Bernhardt, who was open about her surgery.

There’s also the tragic tale of Totie Fields, a popular comedian in the 60s and 70s, who appeared on The Ed Sullivan Show and Mike Douglas and Merv Griffin. She sadly had to have her left leg amputated due to complications from a facelift.

These stories are woven into Askin’s and Hoffman’s journeys. We get to meet their mates – Askin’s fiancé, Rob, and Hoffman’s husband, Steven – and discover that while they’re both very supportive, neither is especially thrilled about the prospect of their partner going under the knife.

The two women discuss at length the reason they are seriously considering their respective operations.

They both have body issues; one, stemming partially from childhood abuse, and the other from a lifelong self-loathing that is largely due to her firm belief that she is flat-out ugly.

One unexpected and rather refreshing aspect of the film – whatever your views on elective cosmetic surgery – is that its viewpoint is utterly unjudgmental. In fact, it has a rather positive view of the practice itself if it makes the patient happy.

The doc does, however, damn society’s sexism and double standard when it comes to aging that may lead to a woman’s decision to undergo plastic surgery.

There are some very funny and trenchant clips from Inside Amy Schumer, for example, as well as terrific archival interviews, including a handful with Joan Rivers, who was an open book when it came to her multiple surgeries.

Take My Nose…Please! turned out to be a pleasant surprise to me; it’s extremely informative and hugely entertaining.

And it’s pretty cool that the director, Joan Kron – who was contributing editor for 25 years at Allure magazine – made her film directing debut here at the age of 89.