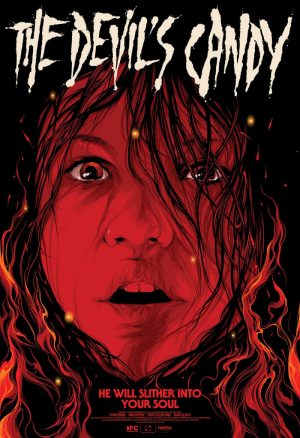 After moving into a rural Texas home which they couldn’t turn down, Jesse and Astrid Hellman (Ethan Embry and Shiri Appleby) along with their daughter Zooey (Kiara Glasco) come to learn why this house was such a bargain.

As Jesse works in his studio painting corporate commission pieces he starts to experience black outs which result in creepy paintings he has no recollection of rendering.

One evening a strange agitated man shows up on their doorstep proclaiming that even though his parents are dead that this is their house and it’s time for him to come home.

What the Hellman’s don’t understand is that the same force causing Jesse’s artistic blackouts has affected the agitated man, Ray Smilie (Pruitt Taylor Vince), and that there are constant voices telling Ray to commit acts which he doesn’t want to do.

The Hellman family are now linked to Ray Smilie by this supernatural force in a conflict that could destroy them all.

The Devil’s Candy is director Sean Byrne’s second feature film following 2009’s The Loved Ones and if these two films are any indication then Byrne will someday be considered a legend of the horror genre. The Devil’s Candy is a well-written supernatural tale whose characters have depth and believability even when acting in an over the top manner.

Along with its great story and strong acting The Devil’s Candy also features a creepy visual style that carries its own sense of dread to compliment that of the story. From the camera work to the set design to the special effects there is not a weak moment of this film.

The Devil’s Candy is a powerful and intense supernatural freak out that will in no way disappoint hardcore horror fans and those who loved The Loved Ones.