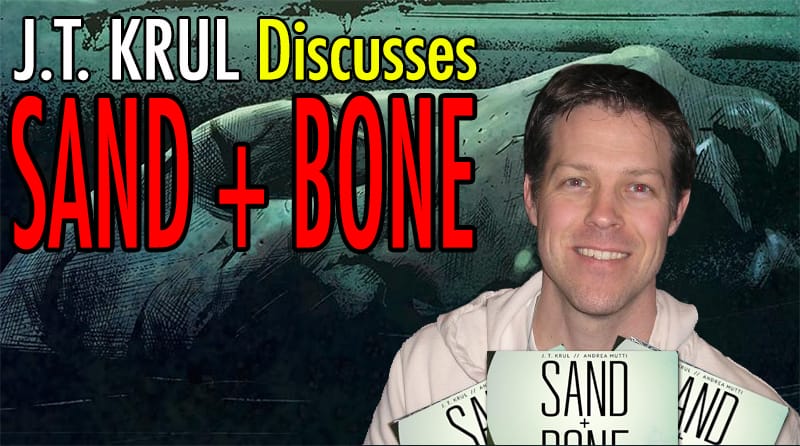 Comics writer J.T. Krul is best known for his work recently on Green Arrow and Teen Titans, but cut his chops at Aspen with Fathom and Soulfire. His latest book, Sand + Bone, from Jimmy Palmiotti and Justin Gray’s Adaptive Books, J.T. and artist Andrea Mutti tackle PTSD and an unexplained supernatural phenomenon.

Sean Hitcher has just returned from war. He didn’t die in Iraq, but part of him wishes that he did. He’s home now, back in the small Midwestern town he grew up in. But he is haunted by nightmarish visions of killing and carnage that seem to be the result of severe PTSD. But are they? Is there something he’s missing. …

As mysterious acts of violence spread throughout the town, Sean begins to wonder if there’s more going on than he originally thought. What terror did he experience on the battlefield, and what horrifying secret did he bring back with him?

FOG!: Thanks for joining us to discuss Sand + Bone! First off, we can’t ignore the art on this book. How did you hook up with Andrea Mutti?

J.T. Krul: That was actually thanks to Jimmy and Justin. They’ve been working with Adaptive to develop their graphic novels, and as we started putting the project together, they recommended Andrea. His style works great with the tone and vibe of the story we are telling. It’s dark and brooding, with a lot of the mystery and the drama hidden in the shadows. And, Vladimir Popov really complements Andrea’s art perfectly, adding a sense of texture and grit in his colors.

The book deals with soldiers suffering from PTSD — and returning home after the war. How is that homecoming different these days as opposed to different generations? Or has homecoming always be as challenging and timeless as war itself?

I think life after war can be challenging for any service member no matter which particular conflict they faced. In terms of how it’s different, I think part of it is the extent to which the wounds and the pain are hidden in many cases. Nobody doubted the horrors faced in the first two great wars, but talking about it wasn’t something that was done for the most part.

I recall a story about one WWII soldier whose own family didn’t even know that he served until after his death. Society almost compelled them to suffer in silence. Likewise, those from the Vietnam War also struggled with the yet-to-be diagnosed PTSD, but for them, the negative stigma of the war led them to be rejected after they came home.

To me, that also seemed like one of the greatest failings of this nation. Here we had young people, many drafted against their will, forced to take part in an unpopular, and when they finally made it home – their nation (and their citizens) shunned them to a certain extent. For today’s veterans who saw war in places like Afghanistan and Iraq, I think there is something of a disconnect.

Everyone is quick to wave a flag or wear a yellow ribbon and state their support for the troops, but the fact of the matter is that we are not doing anywhere near enough to take care of them. We’ll cheer a soldier in uniform standing center ice at a hockey game, but as a nation we leave them with inadequate care and support.

Without spoiling anything, Sean does transition in a huge way. How will people like his ex Hannah’s reaction to this change affect his ability to adapt to his new situation?

Sean changed on the battlefield, and for him there is no going back, no recovery, no cure. In much the same way that the reality of his time in service (what he’s seen and done) creates a barrier between him and people like Hannah, so too does his new reality. 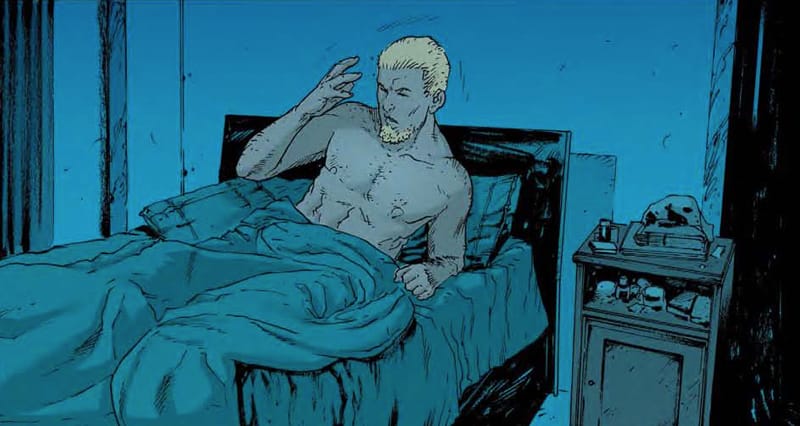 What – in your opinion – is the #1 thing people should be aware about veterans with PTSD? Also, what got you interested in making a book about the subject?

More than anything, people need to be aware of how big a problem it is throughout the veteran community. So many soldiers may return home physically intact, but their damage is buried within. Too many of those who have fought for this nation take their own lives because the help they need is just not there, or they lack the access, or they get lost in the societal false narrative that such problems are a result of their own weakness.

I’ve met many service men and woman while working the comic industry, and I have seen their struggles and heard their stories. Aside from the families directly affected, wartime goes largely unacknowledged here at home. So, any chance we have to shine a light on the price they pay, I think it’s a good thing. 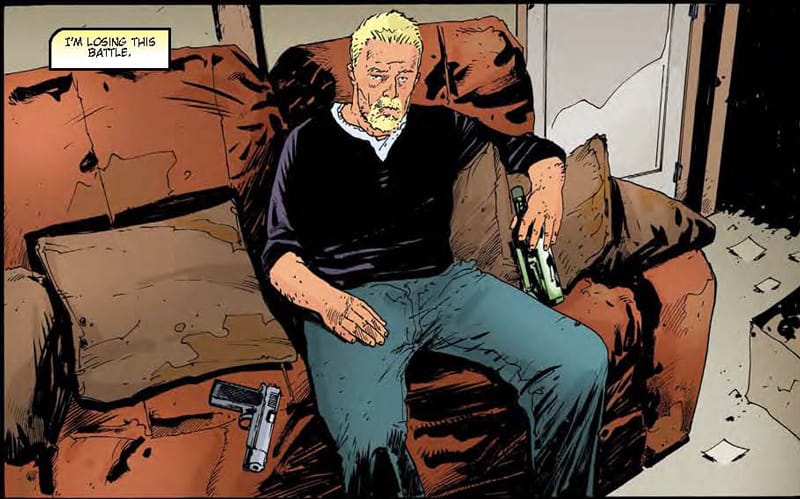 Is Sand + Bone meant to be a continuing story, is this the first volume with more to come?

Not to reveal too much, but I think it lends itself to the possibility for more to come.

What role to Jimmy and Justin play with Adaptive Books and this book?

Jimmy and Justin have played an integral part in the development of Sand + Bone. They bring a tremendous amount of talent and experience with them and have been involved every step of the way. Adaptive is really showing itself to be adept at mining the right kinds of stories and having people like Jimmy and Justin helping out really elevates the entire process.

Do you have and more books coming down the pike? Where can we follow you on social media?

I have published the first two novels in my Lost Spark series and continue to write regularly for comics. With Aspen Comics, I have a new volume of Soulfire in stores right now, and later in the year I’ll be launching the third volume of my creator-owned fantasy adventure series called Jirni. People can reach me on Twitter @jtkrul. 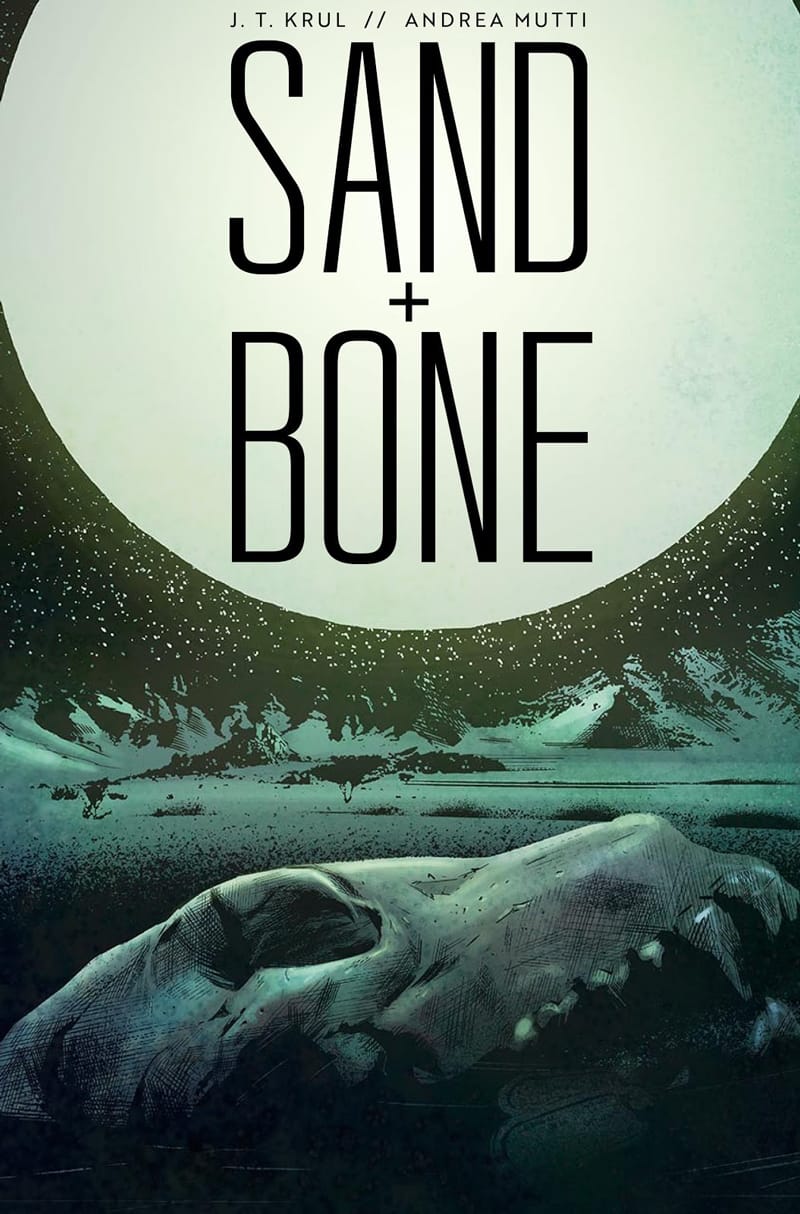