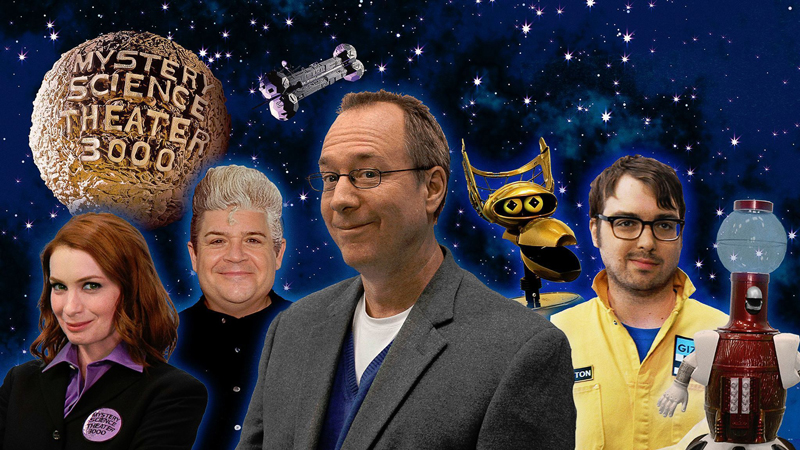 After a record-breaking Kickstarter campaign, everyone’s favorite movie-riffing heroes are back–this time on Netflix which means you get 14–count ’em–14 episodes all at once. With a strong start riffing the Ib Melchior-penned Reptilicus to the classic At the Earth’s Core starring Doug McClure and Peter Cushing, I have to say that, of what I’ve seen thus far, this is one of the better seasons in regards to movie selections, and a very promising season in regards to the new cast and crew.

Buckle in. We’re talking Mystery Science Theater 3000: The Return and it’s 11th season now appearing on Netflix. [Disclaimer, I’ve only watched 8 of the 14 episodes thus far. This only came out last Thursday, it’s Easter weekend, and I have a family that loves me. I’m pretty confident, however, in that this is an accurate sampling to review in light of the entire season.]

Right out of the gate, I know there have been complaints–most notably the absence of Joel Hodgson on screen. The truth is that Hodgson is involved in this show to his eyeballs. (That’s him in the center in the header image to this piece.) Hodgson is the one who managed to get the rights back to the show, got the Kickstarter kickstarted, writes, directs, and even plays the role of the guy on the 14th level who pulls the lever and feeds the movie to our hapless heroes. He even has some dialogue from time to time. Remember, Hodgson left partially because he didn’t want to be on-screen anymore. That, plus creative differences drove him away for a bit, but he never stopped loving his creation and MST3K: The Return is pretty much his baby.

So let’s talk about the cast. You’re not going to get Joel on-screen more than he currently is. Mike Nelson, Kevin Murphy, and Bill Corbett are off doing RiffTrax and there are no plans for crossing over. We have cameos from the rest of the old crew, which is nice, but it’s okay to say that an all new cast is not a bad thing. 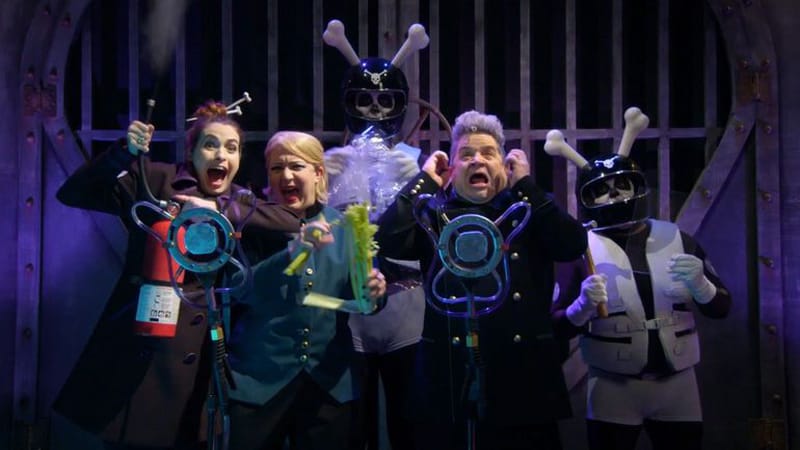 I was a little concerned at first when I saw it was mostly L.A. actors, comedians, and writers involved as the show had always had a fairly distinct Midwest sort of feel to it. That said, everyone involved is a fan. These are not people out to exploit a franchise, but fans who already feel invested in the franchise. Everyone involved has solid geek cred–many having worked with The Nerdist and Geek & Sundry folks. So long as Chris Hardwick stays the hell away from the show, I think they’ll be fine.

Felicia Day does a great job as the latest generation of Forresters to torment our heroes. There is just enough touch of awkwardness to give it a genuine sense of the shows past awkwardly-acted villains. Patton Oswalt is a bit more seasoned and professional as Max, TV’s Son of TV’s Frank. He has comic timing and delivery down, but doesn’t upstage Day in any way. I was particularly pleased with Jonah Ray’s portrayal of Jonah Heston, the token human test subject. He slips into role naturally and, maybe after another season, could easily be the equal of Mike Nelson. 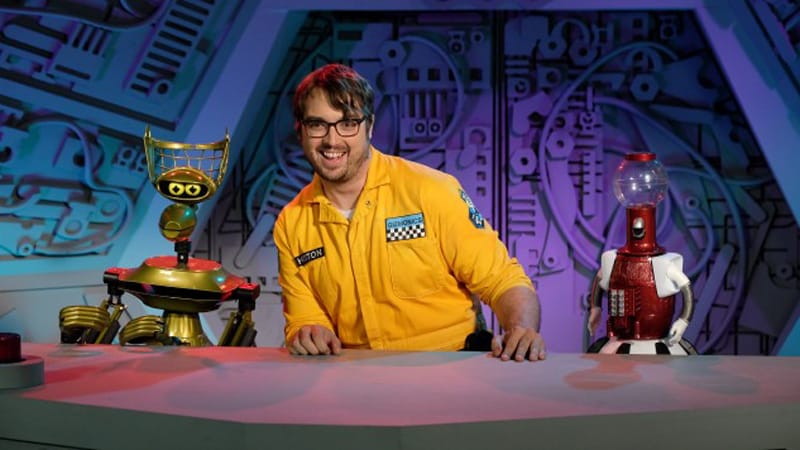 For the robots–it’s all new voices of course. Hampton Yount as Crow and Baron Vaughn as Tom Servo do fine jobs. They’re always going to suffer in comparison to folks like Beaulieu, Corbett, and Murphy, but, like Jonah Ray, if they get another season or so I think their performances will only improve. For now… it’s not bad at all.

So I’m laying on a lot of postive in this review thus far. Now let’s flip this.

Is MST3K: The Return perfect? Absolutely not. I find the riffs to be too many and in too quick a succession. One doesn’t have room to breath. I think a third of the jokes could easily be cut and it would increase the overall effectiveness of the humor. That, and because they’re rushing to get the funny out, they sometimes make a joke a split-second before the it matches up to what’s happening in the movie. We all know this is a scripted show, but when the joke comes too soon it ruins the illusion that this is more like witty improv. So, yeah… ease up a bit next season, okay? Timing is everything.

I’ve heard some criticize the look of the show–the segments specifically–as either looking too polished or not polished enough.

It’s supposed to look rough–but even amateurs have better technology these days, so it’s also going to look a bit better than older cable access or even low-budget second-tier cable. I think for most of us the sweet spot was the Comedy Central years, but now it’s 2017. There are new fans who grew up with YouTube productions so… so there you go. I think they did a tremendous job in both appealing to the older nostalgic fans and to newer fans. (I particularly love the advertising bumpers even though it’s Netflix–no ads.) 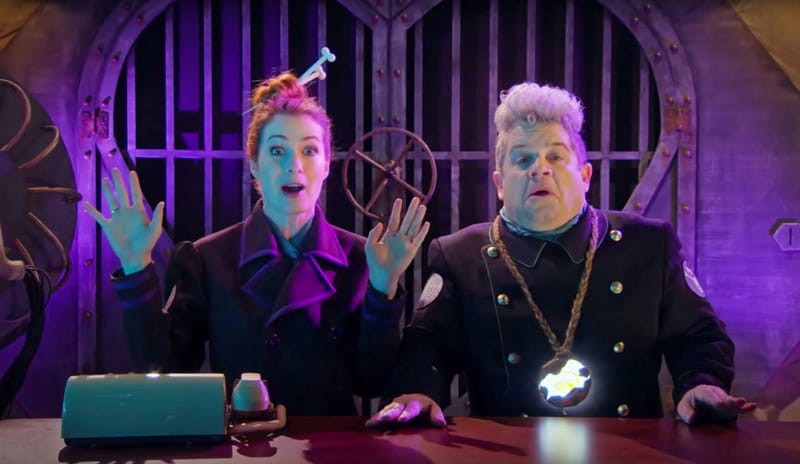 I’m not going to dismiss the haters with a “haters gonna hate” line, but I will remind the haters that few resurrected projects ever fully satisfy original fans. Fans can be their own worst enemy sometimes when they’re insisting on some kind of purity. And everyone has an opinion. Fine. But performers move on, budgets shift, networks get in the way–all sorts of things can sabotage a reboot. With MST3K: The Return, however, you’re probably getting the closest you’re ever likely to get the classic shows. You’ve got Hodgson involved. You’ve got cast and crew who love the original shows as much as the rest of us. You’ve got Netflix which has, thus far, been pretty dependable in supporting its original programming.

While I’ve not seen every single episode yet, just by looking at the episodes list, I think they did an excellent job picking movies to riff on. I’ve seen some of these unironically. It’s probably the toughest part of producing the show–finding and securing rights to movies that are so bad they’re good, but not so bad that no riffing could save it. Personally, I’d love to see some hit movies get the MST3K treatment–Jaws, The Godfather, any Batman movie, that kind of thing, but I suppose that would depart too much from the original spirit of the show.

All said and done, what’s the recommendation?

Well, it’s a cult show–so you have to be open to a bit of weird, a bit of campiness, some corny humor, some cringingly geeky moments, and off-beat humor. If you’re good with that, then give it a try. You may become a new fan in which case you’ve got over 200 episodes to search out–not counting Cinematic Titanic and Rifftrax. If you’re an old fan, and you’re not too beholden to the grip of pure nostalgia, I think you’ll enjoy this as well. If you’re a purist… well… your loss. MST3K: The Return is a worthy successor to MST3K, but change happens. As reboots go, this is probably a lot more faithful than many and I, for one, and happy with what I see.

I think you may, too.

And if you’re still on the fence, let me remind you… “repeat to yourself that it’s just a show, and I really should relax.”

Words to live by.