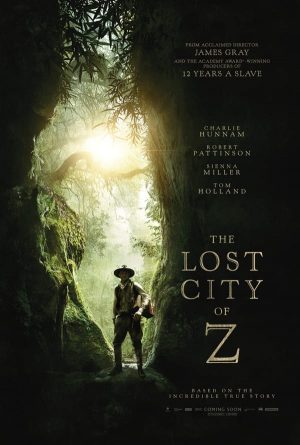 What if you were given the chance to rewrite history?

In recent months, many screenwriters and directors have been faced with this dilemma. With the surge of true cinema audiences have seen dramatic interpretations of moments in history previously unknown to the greater public. How did stories like the black women computers at NASA or the man who made McDonald’s what it is today escape big screen treatment?

In The Lost City of Z James Gray brings to light the strange tale of British explorer Col. Percival Fawcett, who disappeared on an expedition to the Amazon in the 1920s. But bad pacing and a formulaic treatment of the best-selling book undo anything novel about this story.

The film follows Fawcett (Charlie Hunnan) as he journeys to map the Amazon River in service to the Royal Geographical Society. When he returns, he presents the idea of “Zed”, an unseen site deep in the Amazon he believes will hold the ruins of an ancient civilization. Accompanied by his assistant Henry Costin (Robert Pattinson), Fawcett continues to return to the Amazon even as the trips become decidedly more dangerous.

Director James Gray adapted the film himself and gives far too kind an interpretation of the plight of Fawcett. The original book by David Grann has been criticized for extrapolating from limited evidence, and Gray is guilty of a similar crime. The overly straightforward role of “conscious white explorer” gives no rough edges or questions of character to Percival Fawcett. Instead, virtually every stodgy white man that he encounters (which in this movie, nets you 80% of the rest of the cast) plays a racist heartless Eurocentric villain. It works out very well for deifying Fawcett’s work, but not as successfully for an entertaining performance. Grann was able to include more nuance in his book but Gray has gone with the most basic ideas for his adaptation.

It is very unfortunate for Charlie Hunnan as he starts off relatively strong but is given so little depth of character hat he is forced to run at the exact same pace for over 2 hours. In his supporting role, Robert Pattinson gives a refreshing and engaging voice to the movie. His take on Costin ranges from wry to thoughtful, cautious to heroic. At one moment he is strung out, suffering from illness and sores. But in a moment he rallies to assist his companions. Without him, the movie would be interminable.

When history has already written an interesting story, it is even more depressing when it does not translate to other media. The Lost City of Z had the potential to study the motivations of European adventurers, determined to leave no section of the continent unexplored. But unfortunately this movie gives us nothing new in the tired “green-hell” genre. Audiences would be better off spending two hours in their local library, reviewing the original literature.