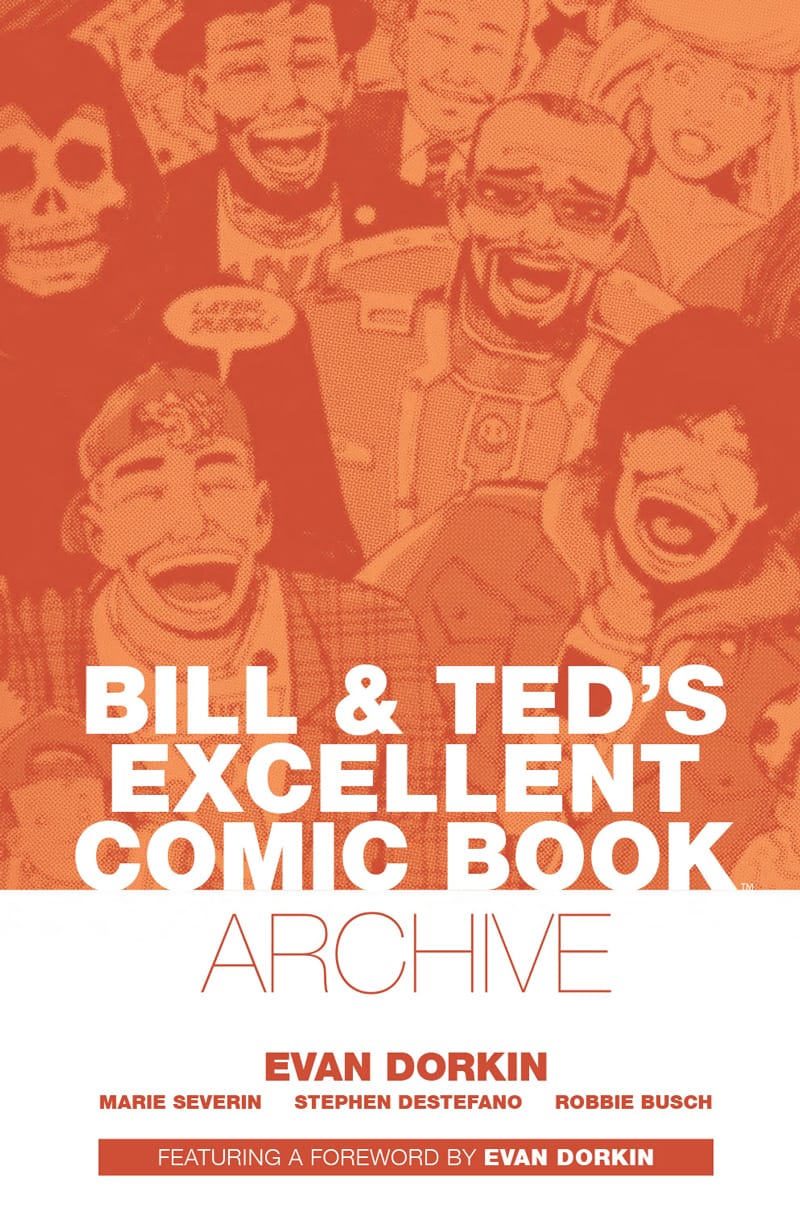 With talk of a new Bill & Ted movie, now is the optimal time to partake in a re-re-read of the most excellent of comic book adventures.

Unlikely heroes William S. Preston, Esquire, and Ted “Theodore” Logan had a rather triumphant comic book run back in the early ’90s. This being the modern age of acquired licenses and returning franchises, we have the pleasure of being re-re–re-introduced to the Wyld Stallyns and their party pal, the non-heinous Grim Reaper.

Revived from Marvel’s archives by BOOM! Studios, The Excellent Comic Book Archive collects a dozen books including all eleven by Evan Dorkin (Milk & Cheese) – who also offers a forward – from the two-year run and the film adaptation of Bill & Ted’s Bogus Journey. The book is an impressive 376 pages with supposedly remastered art and a few pages of new art. It also includes the original letter columns, an element that is often (mistakenly, in my mind) left out of similar collections.

Not only is the book filled with that semi-scratchy, post-’80s comic book feel, but you get lots of weird robots and touches of the pseudo-psychedelic coloring that made acid wash jeans seem cool.

And not in an ironic hispter sorta way.

This is weird with a capital -DUH. Don’t expect much to make sense and you might just enjoy it a bit.

Fair warning in case you have not read the Bogus Journey adaptation before: It’s not exactly right.

As often happens, a comic book writer is given a shooting script well prior to the final edit of a film. This means things that might have been cut from the film got translated into the comic (see the Joker’s face on dollar bills in the Batman movie comic adaptation).

While a lot does parallel the film, a major chunk of the afterlife, including the Grim Reaper, will be a bit foreign to fans, feeling more like alternate – really weird and crazy – breaks in “reality” than mistakes.

It’s 80+ pages of nostalgic setup to the rest of the book. But do not fret my most excellent friends, for Station and the good robots are still there.

The Excellent Excellence of An Excellently Named Comic

The series picks up pretty much where the adaptation left off, with a bunch of historical buddies, including Rufus, partying hardy.

In the next eleven issues we get to revisit Abe Lincoln, DeNomolos, Station, Death, and the lovely maiden-wife-babes-now-moms) Joanna and Elizabeth. The duo partakes in many adventures with Death has a regular companion, even more so than Rufus.

The run begins with their wedding, a book that proves to primarily act as a warm-up to the rest of the series. The courteous inclusion of the historical buddies is a bit overwhelming and, in my mind, obviously done to simply get it out of the way. They do meet up with old friends in future issues, of course, but it’s not never quite as forced and heavy (except maybe at the end).

We witness such oddities as Death on a siesta, the guys hiring a bass player and an unscrupulous manager, a giant ooze monster and the continual taunting of DeNomolos as he is eternally tormented in Hell. We even get to visit Little Bill & Ted Land in the third issue. And, for whatever artist reason, their faces seemingly explode á la Arnold in Total Recall in pretty much every issue.

We also meet Time Thumb who, aside from being a poor pun, is highly reminiscent of Milk & Cheese in that it’s a thumb with a humanish face on it. He (or she?) is apparently an agent of time and periodically pops up often to add a bit more weird to the story.

While the obvious relationship to Doctor Who is the time traveling phone booth/box, the fourth issue also brings in tiny Stations reminiscent of the fat Adipose, but more in a weird multiplying nasty Gremlins sorta way.

By the sixth issue, historical figures are finally brought into the fold, mostly thanks to DeNomolos and a Candyland match. Of course, there are also a few extra oddities and intergalactic villains who join in, but that just seems insanely natural by this point.

In one issue the Grim Reeper – whose name is really, Thanatos, as we learn – has to take part-time jobs after being replaced by a younger, more exuberant reaper named Morty.

Yep, they went there and embraced the shark jumpin’ younger-version-of-a-character tactic.

In fact, after avoiding the obvious heroes-in-tights-and-capes tactic, issue #10 overly embraces it.

Featuring crazy splash pages galore, the book has the team visit Hyper World where everyone is either a super hero or a super villain. Basically take every hero you know from the ’80s, put their books in a blender, pulse five times and then glue random pieces together. That’s pretty much the result here.

The series culminates with a party to end all parties, featuring a plethora of Bill & Teds from alternate dimensions. A lot of old friends and foes are also brought back to say farewell to the series. 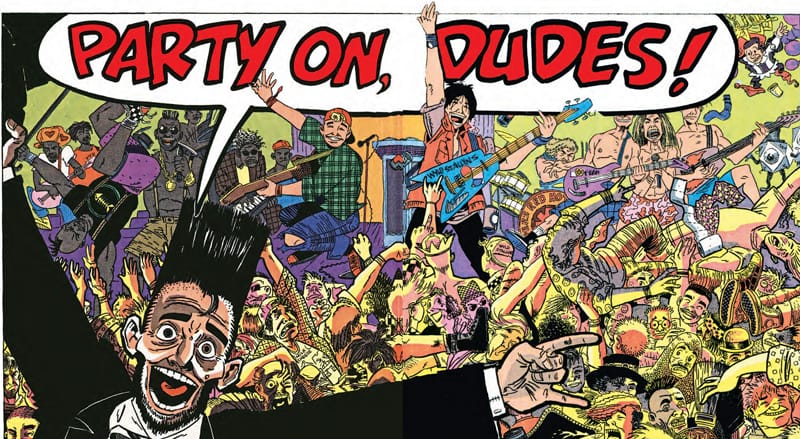 Beyond the totally wacked out stories, the book ends with 16 pages of art including pencils, inks and alt covers by Dorkin as well as a few other artists.

Party on, dude, and be excellent to each other.

PS: If you did the math, you’ll notice that one issue is missing from this book. Yep, it’s intentional: Dorkin didn’t work on issue #8 in the original series, so it’s (unfortunately) been left out.