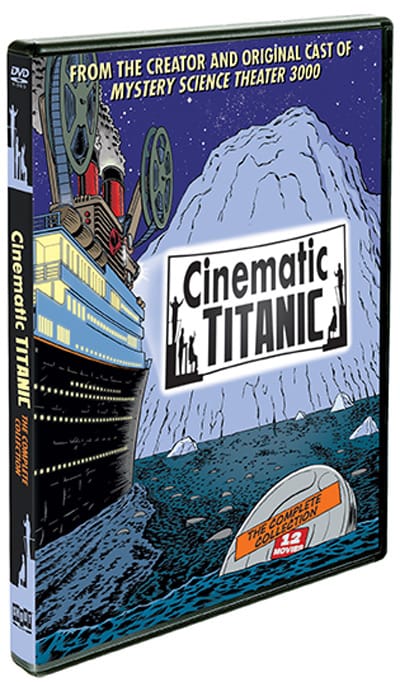 The end of the initial broadcast run of Mystery Science Theater 3000 did not mean the end of world-class movie riffing. In 2007, five of the original cast/writers of MST3K – Joel Hodgson, Trace Beaulieu, J. Elvis Weinstein, Mary Jo Pehl and Frank Conniff –  launched Cinematic Titanic, a leaner, hungrier leap into razor-sharp comedy built on the back of cheesy movies. For the next six years they toured the country with a critically acclaimed live show and left throngs of delighted fans in their wake. Available as a complete collection for the first time on August 8th, 2017, the DVD release of Cinematic Titanic also includes the featurette Between the Riffs and a brand new interview, A Look Back with J. Elvis Weinstein, as bonus features.  Fans who pre-order their collection via ShoutFactory.com will also receive a free 18” x 24” poster of the cover art by artist Steve Vance as a gift with purchase, while supplies last.

A must-have for MSTies and fans of movie riffing alike, this DVD set collects all 12 movies riffed by Cinematic Titanic, combining all their published mayhem, including their in-studio and live DVD releases.