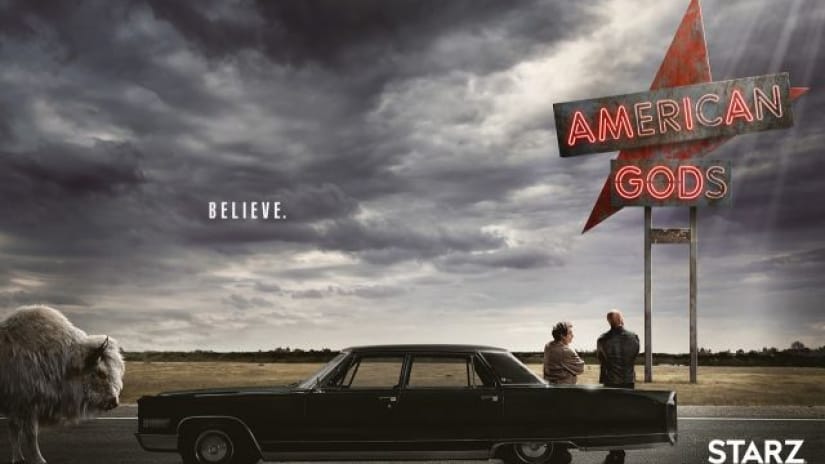 Sunday, April 30, saw the long-awaited premier of American Gods, based on Neil Gaiman’s popular 2001 award-winning novel of the same name. It has been a long wait in getting this book to any kind of screen–large or small–but the wait was well worth it. If anything, it going to mini-series format works best as it’s a rich, layered story that would not have been as satisfying at typical movie lengths.

“The Bone Ochard,” as the first episode shows much promise right out of the gate. I admit I was a little put off at first by the garish and over-the-top bloodiness of the opening Viking scenes, but then I remembered that this is a Starz production… you’re not always going to escape rivers of blood. That said, the first episode, I think, was most impressive in its faithfulness to the source material. 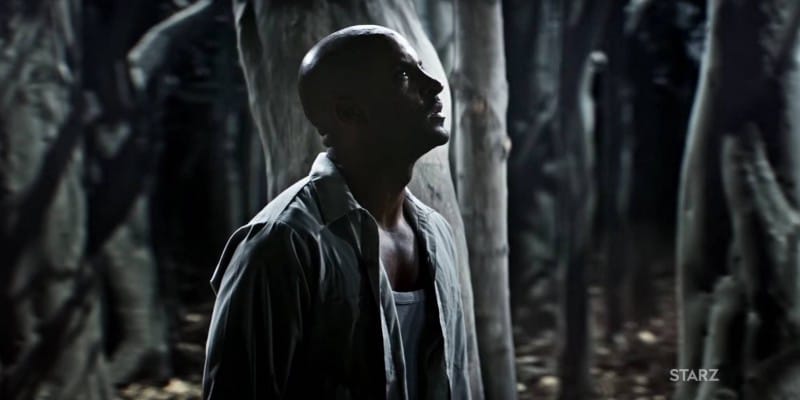 After a bloody “history lesson” concerning a disastrous Viking visit to the New World, we’re introduced to Shadow Moon, a man being released a few days early from prison so he can attend his wife’s funeral. Along the way he meets a man named Mr. Wednesday who hires him as a sort of driver/assistant/bodyguard. Shadow’s experiences re-entering society are thrown off a bit by a series of bizarre visions, air travel hishaps, angry mourners, and other strange (and violent) encounters. There is a lot of set-up going on here, and it’s hard to describe too much without dropping spoilers.

Running alongside all of this is an additional storyline featuring an enigmatic woman (Bilquis, an ancient love goddess) who hooks up with a guy which culminates in one of the more disturbing scenes ever written. It’s handled masterfully and when the viewer realizes exactly what’s going on in that bed… oh, the horror. 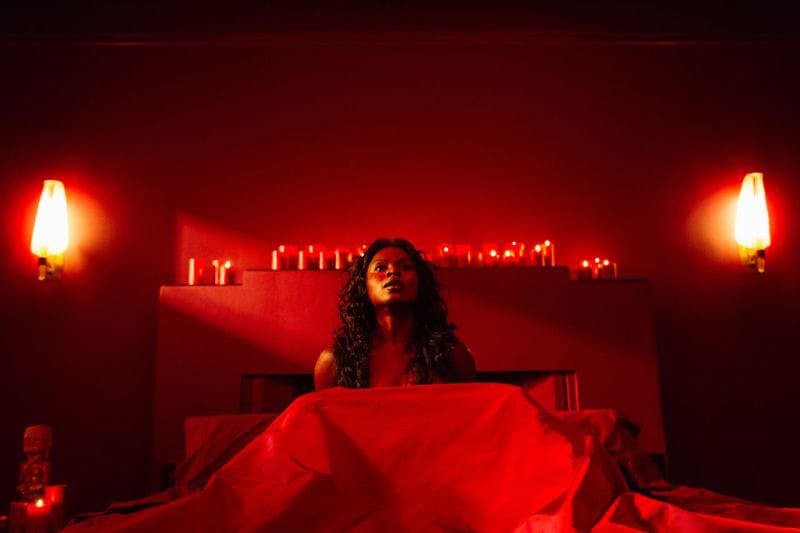 I won’t be giving away much by discussing the overall theme of the story. It’s essentially a show down between the old gods of America–those that came with various waves of immigration, and those that were already here, and the gods of the modern world. It was a timely topic 16 years ago as technology and pop culture dominated the American landscape more and more, and is as timely today, if not more so, as technology and pop culture has dominated the American landscape.

How this plays out in American Gods is for you to see.

I have no idea how many people who will watch this series are familiar with the original novel. 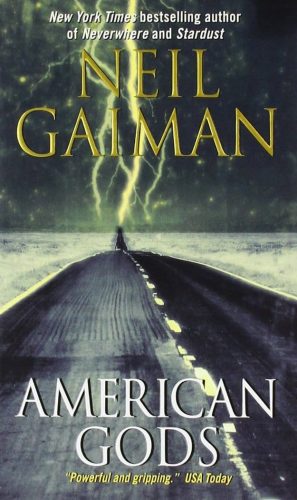 While it’s over 15 years old, the book still sells reliably well. I think many fans are familiar with Gaiman’s work in general, though. The Sandman comics, Good Omens (with Terry Pratchett), Neverwhere, Stardust, Coraline, etc. have made Neil Gaiman almost a household name.

While we’re still waiting for a good Sandman or Good Omens movie or series, American Gods has also been high on fans’ wish lists.

Its tone is pretty dark–more reminiscent of Gaiman’s earlier work such as Neverwhere than later, whimsical works like The Ocean At the End of the Lane. While pretty much everything Gaiman has written includes disturbing scenes, American Gods is likely going to surprise and even shock a few viewers.

It’s hard for me to separate my knowledge of the book with the Starz adaptation. Fortunately this is one of those cases where the book and the show are matching up pretty well.

The few places where it doesn’t are, frankly, for the best.

At the risk of giving a spoiler, I’m glad we weren’t given the name of Shadow’s cellmate (or, if we did, it was fleeting and I missed it). In the book, it was a kind of clumsy giveaway. The series gives the story a second chance to revise some minor flaws.

The pacing is handled quite well. Not too slow, but also not an onslaught. I’m curious to see how it will handle some of the slower portions from the middle of the book. 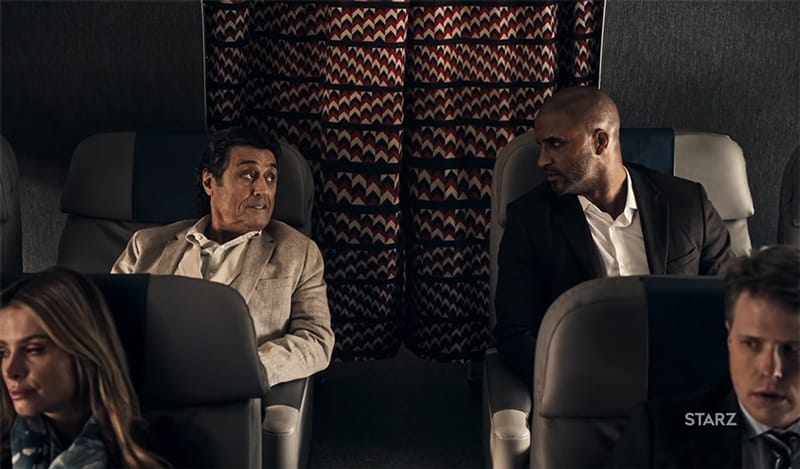 The overall story is not terribly subtle–which is okay. This is TV. Anyone with an inkling of knowledge of Norse mythology outside a Thor comic book is going to quickly notice a lot of hints and foeshadowing. The “bad guy” who appears to torment Shadow makes no bones about who he represents. He doesn’t come out and say he represents the new, homegrown American gods challenging the older immigrant American gods… but his look, style, threats and actions make it pretty clear.

I’ll give it to this production–they aren’t going to be coy–or, at least, not overly coy. For that, I thank them. I can get mysterious hints, foreshadowing, and riddles for endless seasons over at Game of Thrones, thankyouverymuch.

As for the cast… they may not be exactly how I envisioned them when I first read the novel, but the representations in the show seem to work perfectly well, and will work well for viewers who haven’t saddled themselves with certain expectations from the book. Ricky Whittle does a fine job as Shadow Moon. Ian McShane steals many scenes as Mr. Wednesday (which is totally keeping in character). Yetide Badaki is captivating as Bilquis, and I had a lot of fun watching Pablo Schreiber as Mad Sweeney, a rather tall leprechaun. 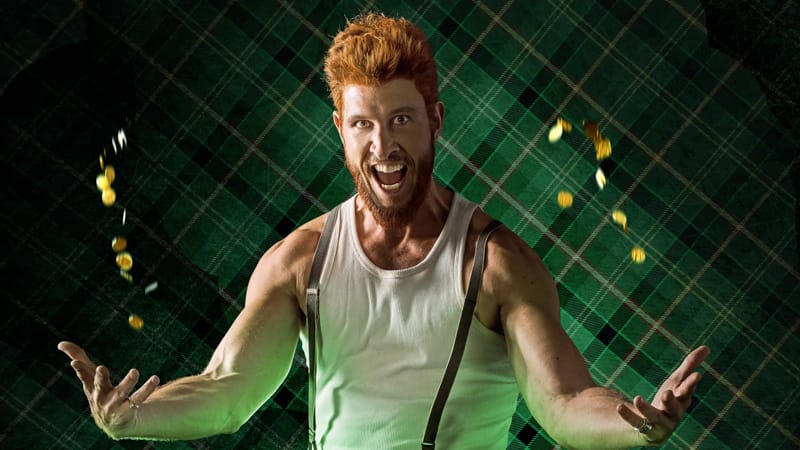 So really… with the exception of a possible-too-much-fondness for over the top blood and gore, Starz has done a surprisingly good job bringing American Gods to the masses… well, the masses who have access to their network. Producers Bryan Fuller (Dead Like Me, Pushing Daisies, Hannibal) and Michael Green (Kings, Smallville, Heroes) know and respect their material. Neil Gaiman is listed as an executive producer, and I think this is not just a giveaway title as it usually is. I think we can see his hand in the development of the adaptation as well.

All in all, it’s a great start to what looks to be a highly entertaining series and successful adaptation.

Looks like there will be more to Sundays than Game of Thrones for a little while.