It’s been a fine week of comic book reading!

Let’s take a look at some books hitting stands this week! 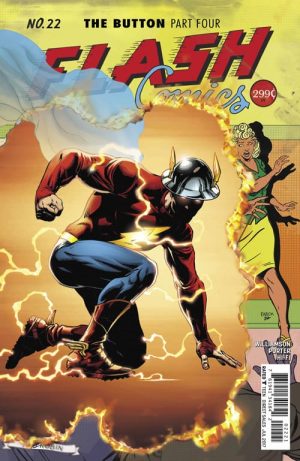 The Flash #22
Written by Joshua Williamson
Illustrated by Howard Porter

Oh my god!!! This issue was incredible!! I just finished reading it and I’m over the moon about this Rebirth storyline! You need this issue! It’s the best issue DC has put out this year by far!

This is the final part of the excellent storyline “The Button.” The Flash and Batman travel through time here trying to figure out what the deal is with the smiley face button.

Their quest leads to them following the Reverse Flash to his seeming death. Then Jay Garrick appears and plays a small but key part. Then the last four pages happened.

My god, those last four pages.

Williamson and Porter kill it here. This is a great lead in to November’s “The Doomsday Clock” storyline.

Kudos to DC for making an exciting comic book storyline in the mainstream. This has a lot of build up and they delivered. This actually gave me chills. Certifiable chills. I’ve never been so excited about reading comics as I have right at this moment. 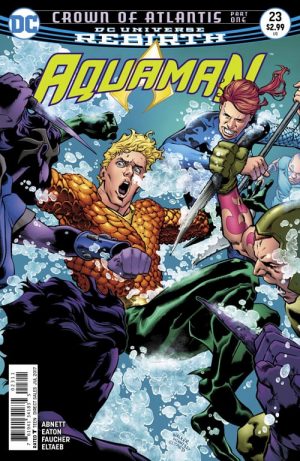 This was awesome! Aquaman is back fighting for his life and it’s thrilling! Dan Abnett makes this first chapter of the “Crown of Atlantis” storyline something truly exciting and it’s something we haven’t seen before!

The people of Atlantis have had it with Aquaman and his antics!

They decide it’s time to get rid of the guy! So Aquaman fights back to keep on being King! I loved it. It was a dark issue.

The pacing is nice and tense. Abnett knows his stuff here and just goes for it. Eaton does a nice job on the art too.

It’s a good start for a new storyline!

Pick it up! Well worth your time! 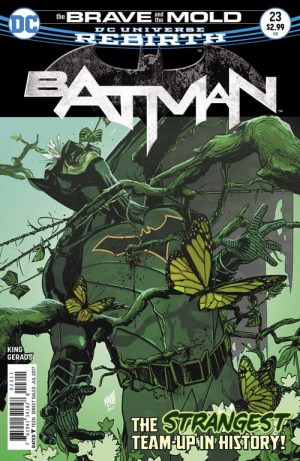 Man, the Tom King written Batman series has been a real slog. King just has a one dimensional take on the character. That may work for a single issue but the entirety of his run feels pretty soulless.

This issue is a little better than most, just because of the Mitch Gerads artwork.

This issue is the long awaited issue where Swamp Thing stars. It has the nine panel Watchmen grid. It’s basically an entire issue of just banter between Batman and Swamp Thing.

There is a “humorous” Kite Man section that’s a real groaner. Not to worry.

There’s PLENTY more groaners where that comes from in this issue.

Again, The art by by Mitch Gerads is best part of the issue. Maybe in two issues with the new Riddler/Joker storyline King will get his act together. I’m not so sure at this point though.

Next issue is an aftermath of the Bane storyline…to which I say “ugh.” 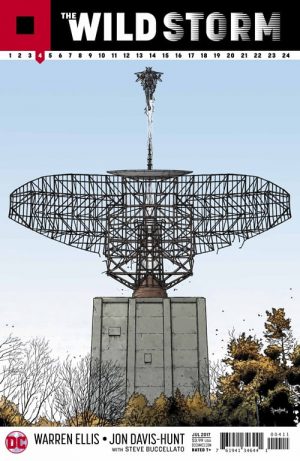 This reimagining of the Wildstorm Universe is truly great. Ellis has taken characters that were almost ready for the garbage bin and spun them into gold.

It’s super cool to watch and this issue continues the awesomeness.

I.O. Gets tipped off of an undercover action team that has appeared. Angela Spica is on the run. And Mr. Henry Bendix is starting to take notice of all this. It’s all leading into something big.

This is one of the more interesting reads of the year. Ellis again writes strong scenes and events that are slightly skewed and warped. It’s refreshing rather than weird.

The art by Davis-Hunt is top notch. He can really do the big action scenes well.

He also makes the character moments stunning too. He reminds me of Frank Quietly and Chris Burham…both can do the same thing. It’s incredibly dynamic.

This is one of the best reads of the new year! Recommended. 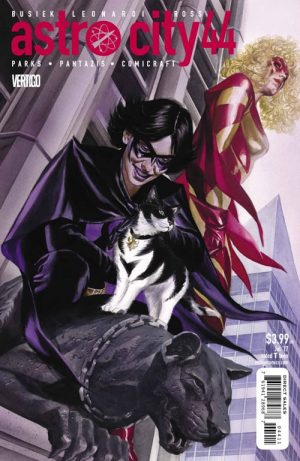 This is my favorite issue of the week! I just loved it.

Busiek’s story is called “The Cat Who Walked Through Walls.” This is something that put a smile on my face.

The lead character is none other than a cat. We get to see this superhero world from Nightingale’s and Sunhawk’s cat.

Busiek’s strength as a writer is that when he gives us a new perspective on a familiar tale. He does that here in spades. It’s creatively excellent for sure.

When you put Rick Leonardi on a title, I jump for joy. He’s a great artist. I love him. He’s been excellent in the industry for over thirty years. His line drawing is just classic.

Pick this up. It’s a quality read. 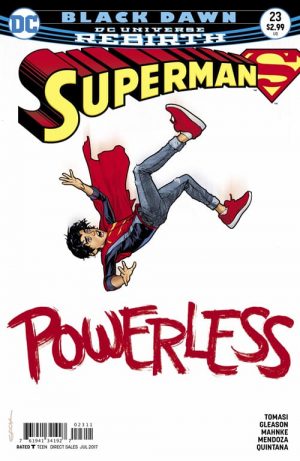 Another chapter of the Black Dawn storyline is upon us. It’s a pretty nutty storyline. There is a mysterious villain behind Superman’s defeat and they make themselves known(you should know who it is if you preview upcoming issues)

All of this, and Superboy starts to wonder about his father’s ideals. Tomasi and Gleason know these characters inside and out. They have it down. This issue is primarily action but they infuse it with character moments as well.

The opening slugfest is great as is the last “revelation” of the issue.

I love Mahnke. He is one of the best artists at action and expression. Here he shines. Pick it up. Things are heating up and you don’t want to miss it! 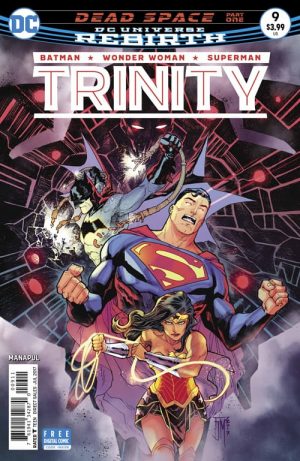 I wish Francis Manapul would let somebody else handle the writing duties on this title. I love his art. It’s his words that don’t resonate with me.

Sometimes, they don’t even register.

The Justice League is trapped in the Watchtower!

It’s a death defying adventure as they try to find out why and get out of these hijinks! They also need to find out who is responsible.

None of this is very compelling.

The story is bland and not very good. The art is, of course, very nice. I appreciate that Manapul colors his art now as well. That’s something, right? 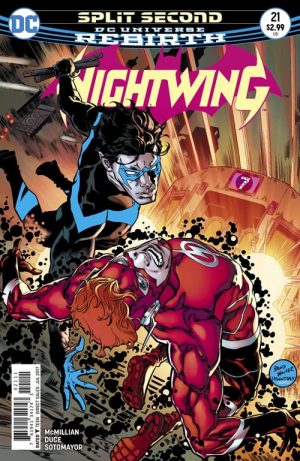 What?! Tim Seeley is not the writer of this issue? Maybe it’ll be halfway decent, I thought to myself. Hey! The Flash guest stars too! This is looking good!

It’s definitely a slight improvement of the previous issues.

Nightwing and the Flash team up to fight against the villainous Timebomb.

To be honest, Timebomb is a little goofy. McMillan isn’t a top shelf writer either. Still, the comic is better than we have been used to.

I like Christian Duce’s art. He’s been making the rounds recently and he’s fairly decent. Not a bad issue overall. Maybe this title can turn around now? 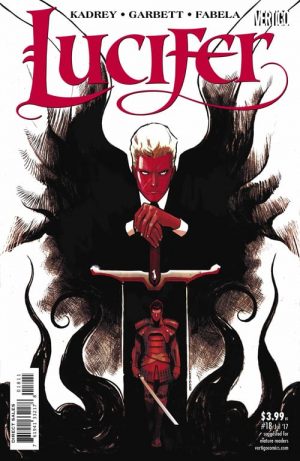 Lucifer is one of those take it or leave it books.

The stories are always pretty good but if I didn’t read them I’d be okay in life.

This issue continues on that trend.

Forces are gathering against Lucifer forcing him to get protective of his domain on Earth. So he must take drastic steps to protect himself.

Those steps are the most interesting part of the issue and kudos to Kadrey for making it interesting.

The art is very good and has a great dark quality to it.

Pick it up if you’re into the series. 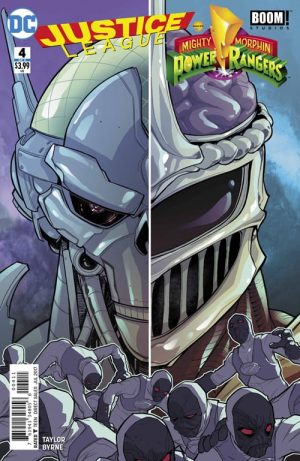 I am not a fan of this series. It’s just not my cup of tea. It might be yours. I just might be told old for this.

It’s not badly written. Just not for me.

Tom Taylor does a decent enough job. The art by Byrne is really good! I enjoyed that very much.

But hey! If you like the Justice League and you like the Power Rangers and have been dying to see them together…well this one is for you!! 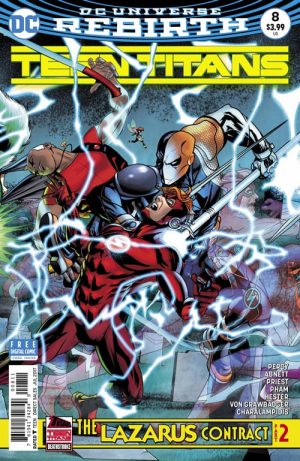 I normally hate this series but this issue was pretty good actually. It’s part two of the Lazarus Contract.

The storyline starts off in Titans #11 very strong and picks up here. It’s a good second part.

The Titans and the Teen Titans team up!

Both teams are being hunted by Deathstroke, the worlds deadliest assassin! It’s damn exciting! Secrets come forth! Betrayals are revealed! It’s a good comic book.

Percy’s writing kind of bored me to be honest but here he does very well. The layouts and art here keep the energy high. This storyline is very good.

Hopefully this book benefits and they keep it up past this event.