Praise the geek gods for Greg Berlanti and the Arrowverse, right? 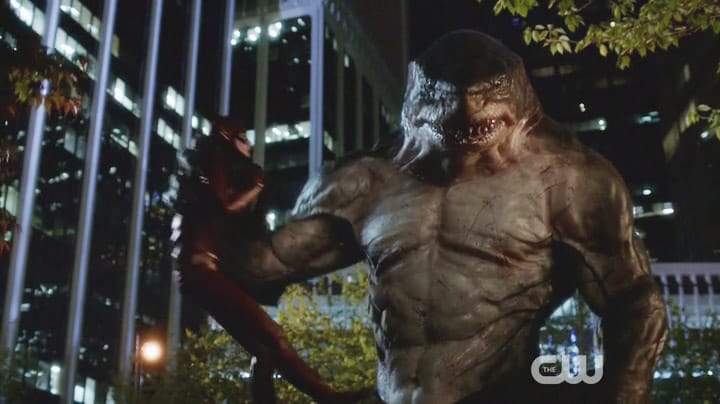 Really. Not kidding. Here’s how I rank the shows: Legends of Tomorrow is first, followed by Arrow. Then, depending on my mood, Supergirl and The Flash trade off Nos. 3 and 4.

A year ago, Legends was a definite last place. Rip Hunter was even more of a Doctor Who ripoff in the hands of Arthur Darvill, who played one of the Eleventh Doctor’s companions. (Oddly enough, Hunter debuted in 1959, whereas Britain’s favorite Time Lord first aired in four years later.)

Firestorm suffered under not fleshing out Jefferson’s character enough. Captain Cold and Heat Wave’s weaponry was downgraded, and we didn’t get enough of them together. But the chief offense was Casper Crump’s failure to elevate Vandal Savage to the savagely brutal, world-class evil he deserved to be. 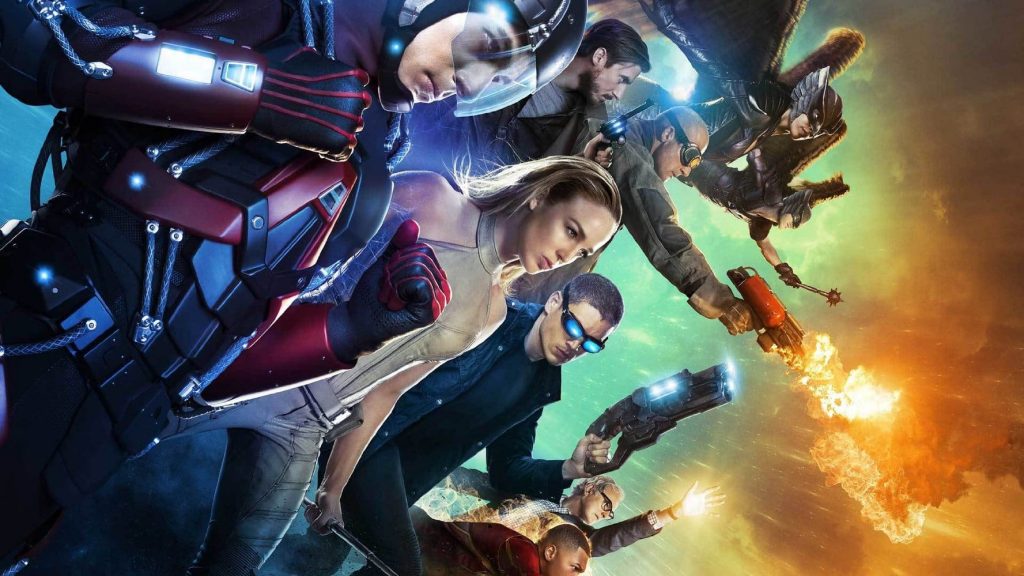 But as I went through the first season, some things started to happen. Captain Cold and The Atom became a fun comic pair, especially when they went to the Soviet Union. Chronos being unveiled as a brainwashed Heat Wave was good. Hawkgirl and The Atom being stranded in the 1950s and falling in love had some good emotional notes. Jonah Hex showed up when the Legends traveled to the Old West.

And then, when Damien Darhk turned up in the past, the show really turned a corner. But when Mick Rory started doing the show introduction, I knew it kicked up into the super-duper fun zone. Hence an episode in which The Atom and Commander Steel have to convince a young George Lucas to make Star Wars and Raiders of the Lost Ark so that they are inspired to pursue careers that led to their superheroics. 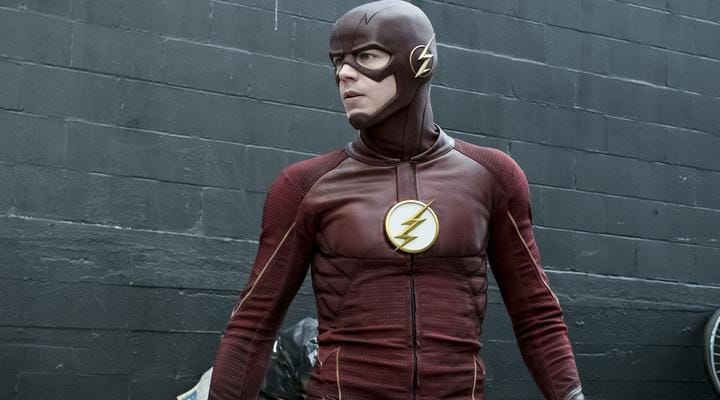 The Flash has spent two seasons in a rut of evil speedsters and Barry Allen’s awful decision-making. For real, it’s been so bad with Barry that, this season, I had been saying he’s the actual bad guy of the show – before we found out big bad Savitar actually is a time-remnant future version of Barry!

Kara Zor-El hasn’t been too far behind on Supergirl. I’ve had to watch her be a bad journalist, a bad friend, a hot-and-cold girlfriend, and occasionally bratty to her sister. Then this season, which had done awesome commentary on social issues such as immigration and LGBT rights, took a female-fronted show and sunk everything with Mon-El drama that takes his side a lot.

Also, the progressive nature of the show took a huge hit when it broke up Kara and James Olsen, played by a black actor, as soon as they were put together, only to move in Mon-El, played by a white actor. (Not to mention the largely pointless arc of turning him into the vigilante Guardian.) So the interracial romance between Kara and James was replaced with the “interracial” romance of a Kryptonian and Daxamite? Sure. 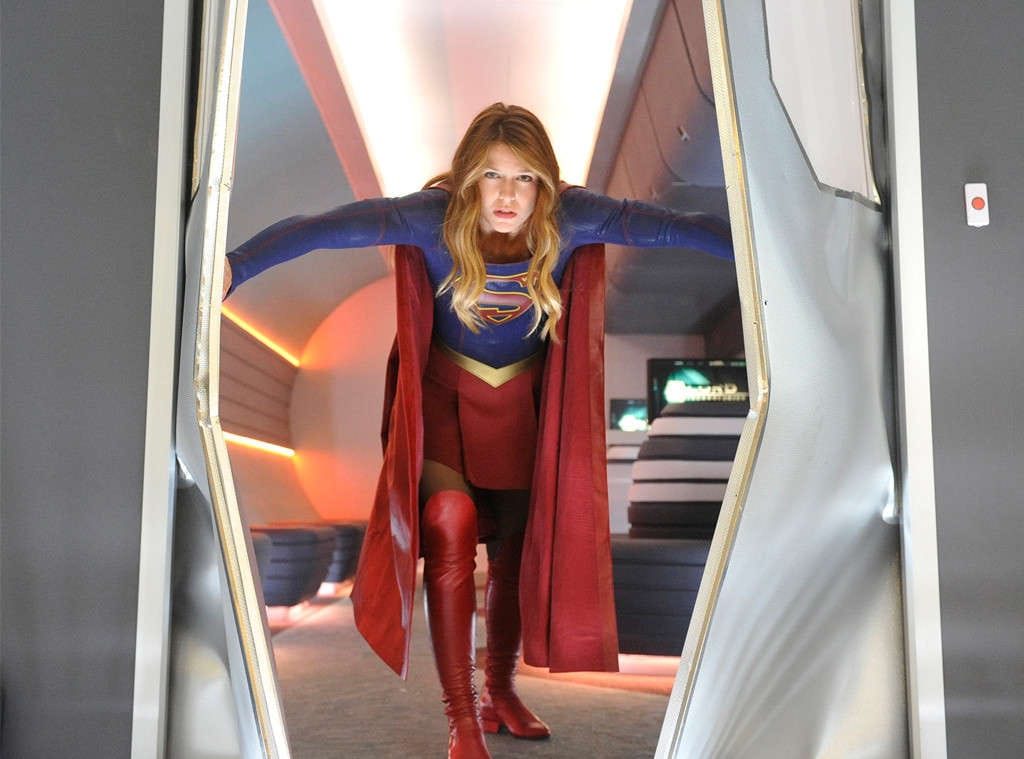 All of this has kept me off Supergirl for a while, but things have been heating up now that Rhea, queen of Daxam, is emerging as a big bad villain parallel to Lillian Luthor and Project Cadmus. Supergirl has had to find its feet again after leaving CBS for The CW, and that includes losing Cat Grant as a series regular. Grant, expertly played by Calista Flockhart, both grounded Kara and added gravitas to the series. The reception to her return this week showed how much she was missed, and necessary.

Arrow, actually, has been on rolling along in season 5. It got torpid with the Ra’s Al Ghul storyline in season 3, but then the next year brought Damien Darhk, HIVE, a nuclear blast, underground Wayward Pines-style bunkers, Thea’s bloodlust returning, the rise of a new Team Arrow, Oliver’s secret son (!), and the death of Black Canary.

Season 5 has seen Oliver Queen become mayor, grow in maturity and trying to let go of his past. Adrian Chase/Prometheus combines the preachy morality of the Jigsaw killer with the hyper-intelligent, savage brutality of Hannibal Lecter. It’s been fun to watch. 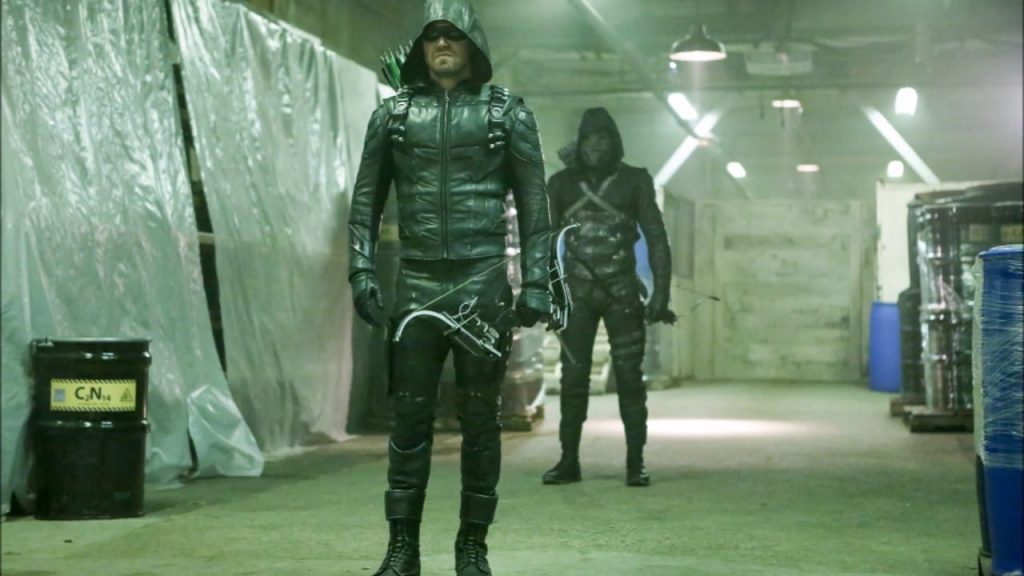 There are some problems, though. Felicity’s storyline hasn’t been freestanding enough, her motivations for joining Helix not as well thought out. And I’m not too happy with Mister Terrific – an Olympian and genius inventor – largely has been played as a joke who gets beaten up a lot as Curtis works his way into becoming a masked avenger.

We’re nearing the end of the flashbacks, but the Bratva stuff is great if only because Dolph Lundgren signed up as Konstantin Kovar. Lundgren’s size advantage on Stephen Amell, and his own knowledge of martial arts, takes Arrow’s fights to another level.

Arrow at its heart has been about Oliver Queen trying to figuratively Quantum Leap his own life by redeeming himself and repenting for his mistakes and the misdeeds inherited from his parents. And after five years in hell before returning to Star City, and five years of heaven and hell as the Green Arrow, Oliver appears ready for a fresh start. 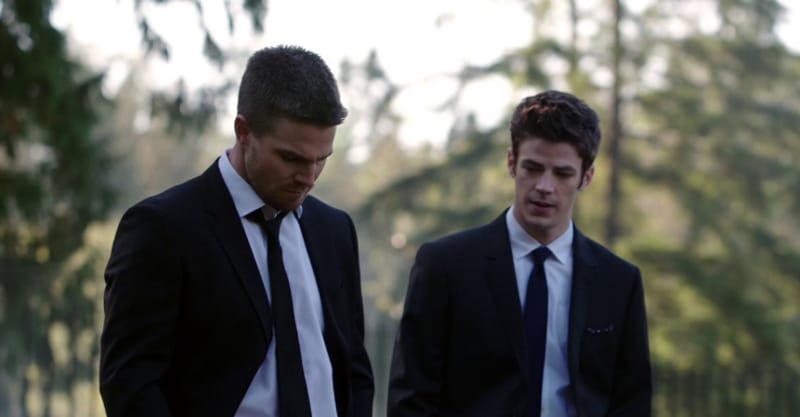 Barry Allen, of course, has spent this past season and the current one of The Flash doing the literal Quantum Leap by time-traveling a bunch. In the process, the hard-earned lightness and zip of the first season – which set it apart from dark and gritty Arrow — has been replaced by a show about a brooding Barry being the worst.

Just when we thought Barry worked through his issues everyone he loves being murdered, he then erases his mother’s murder by Reverse-Flash and creates Flashpoint. We’ve had to watch Savitar kill Iris so many times that, when it finally happened this week, some of the drama was lost.

The show still has some charms, but if Barry just keeps repeating the same bad choices. The Flash is running around in circles. So I’m really hoping that next week’s season finale shows Barry actually turning a corner, and sticking with it. Barry needs a fresh start, too.

But … you know another way these shows can do all of this? By going big-time DC Comics, and enacting a Crisis. That’s right, a good, old-fashioned, reality-warping Crisis! 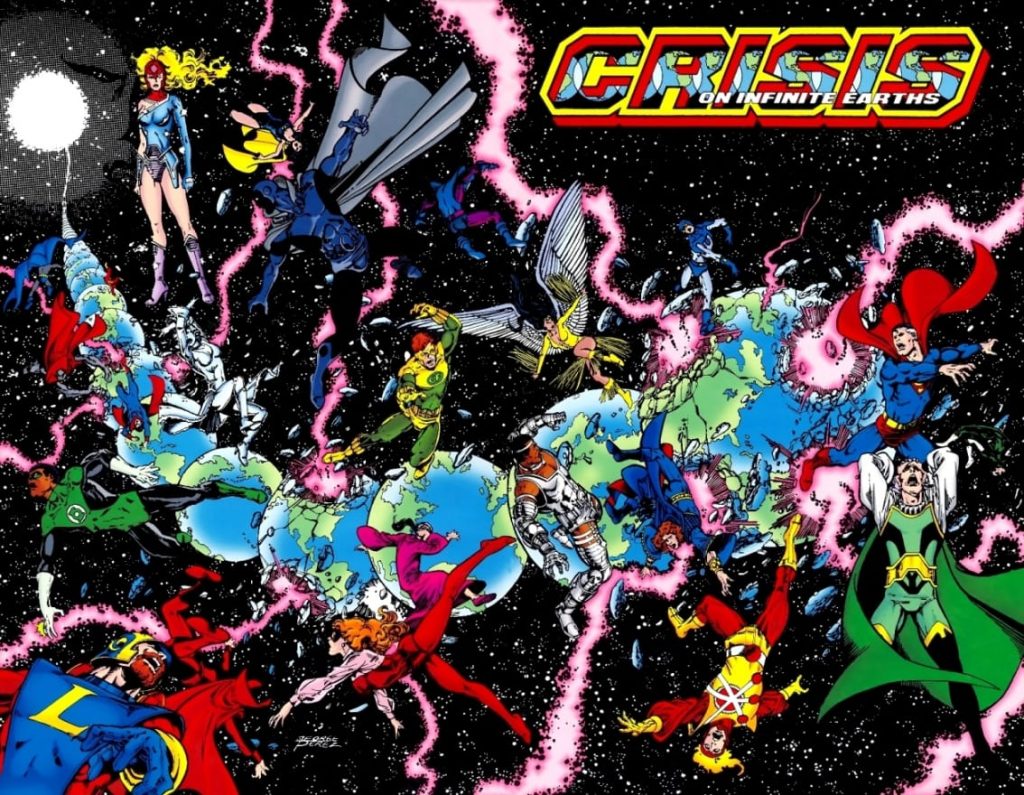 This would be a mega-crossover that you sow the seeds for across the shows, and then it lasts across all the shows for the final two or three weeks.

The Dominators are back on the scene, but it’s unclear whether they are attempting another invasion. A large explosion happens just outside Central City. Barry and the team track it down, and find a glowing green orb. Within the orb, they find a Green Lantern, badly injured. (Kyle Rayner would be a good one to use, but Guy Gardner would be hella fun.)

Green Lantern has but one message – “He’s coming … Brainiac is coming!”

What? Brainiac? Barry and Team Flash don’t know who he is. And neither does GL. “Who’s Brainiac?” they say in Flash headquarters at STAR Labs.

“He’s a destroyer of peoples, of worlds,” replies an off-screen voice. They turn, and it’s Supergirl, fresh from Earth-38. “And we’re here to stop him.” Out walks Kara with Martian Manhunter and Superman in tow. Yikes! 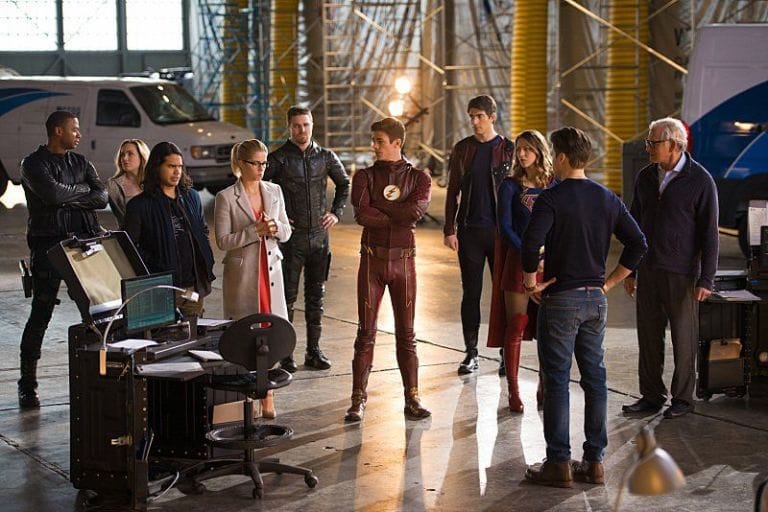 But how has Brainiac found a way to travel between the parallel Earths? Braniac is showing mysteriously enhanced powers. We find out that Brainiac is in cahoots with … the Anti-Monitor! Whaaaaaat!

Supergirl, Superman, Flash, Green Arrow, Martian Manhunter and the Legends team up with Green Lantern to fight Brainiac and the Anti-Monitor. Blow up all the budgets, why doncha?

There’s a lot of cool stuff you could do, because literally anything could happen!

You could have Kara be critically injured or burn out her heat vision like before, which results in Superman carrying Supergirl in a recreation of Crisis on Infinite Earths. 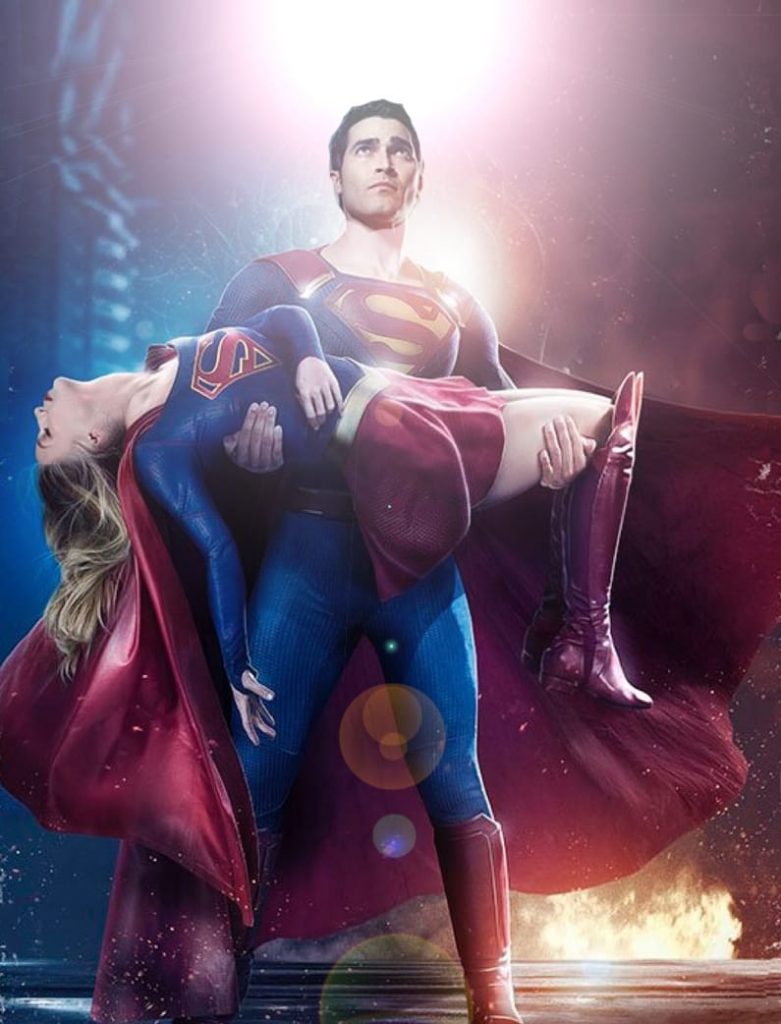 We could see the reality of Earth-38 be erased. James, Winn, Maggie, Cat and Alex wiped out. Green Lantern, who has a six-episode arc, could be killed in the line of duty. Ollie and Felicity are reunited and we see a glimpse of their future! Rip Hunter phases in and out of existence! Reverse-Flash and Zoom are consolidated into one monstrous super-speedster! Ronnie Raymond and Eddie Thawne are alive again, throwing off Iris and Killer Frost! Martin’s daughter, a time aberration, fades into non-existence!

But, above all, Barry Allen has to die at the end. 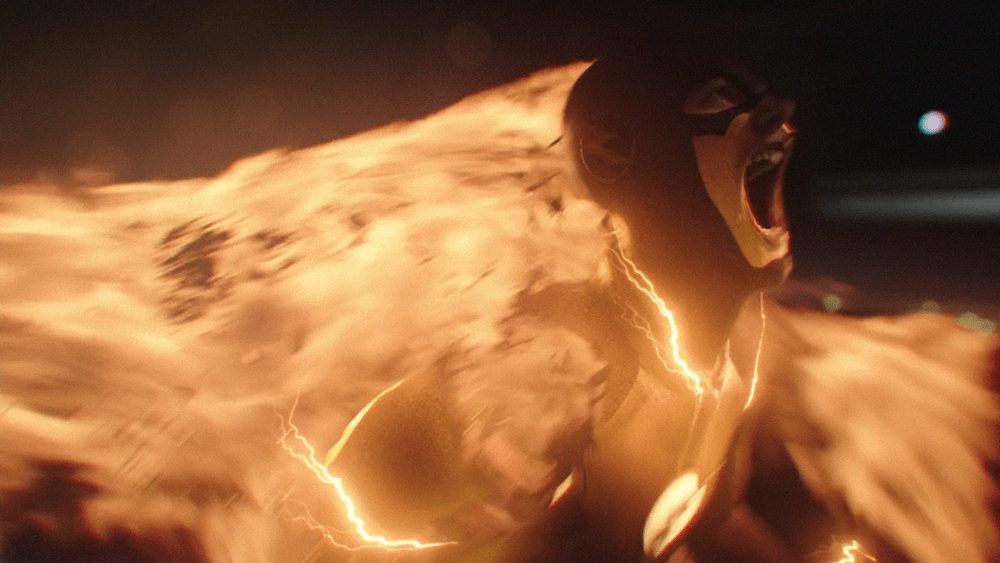 Just like in Crisis on Infinite Earths, Barry runs so fast that he stops the Anti-Monitor’s anti-matter cannon from firing by catching the tachyon beam at the heart of the weapon. I want to see Joe’s waterworks. I want to see Cisco emerge from the wreckage, holding Barry’s empty Flash suit.

Bright flash of light, and reality is remade more than destroyed. The multiverse of Earth-1 and Earth-38 are consolidated into one. No more breaches for Supergirl to see Flash.

Arrow could basically be the same, but Black Canary could be back. On The Flash, Barry is still dead, but imagine a show with Kid Flash and Jesse Quick protecting Central City as partners and a couple.

Supergirl could redo the whole Mon-El mess, maybe even redo or recast Cat Grant. (Yup, I said it.)

Legends of Tomorrow could reinstitute the Time Masters but still stay as dopey and freewheeling as ever.

Of course, the next crossover would be about the return of Barry Allen. 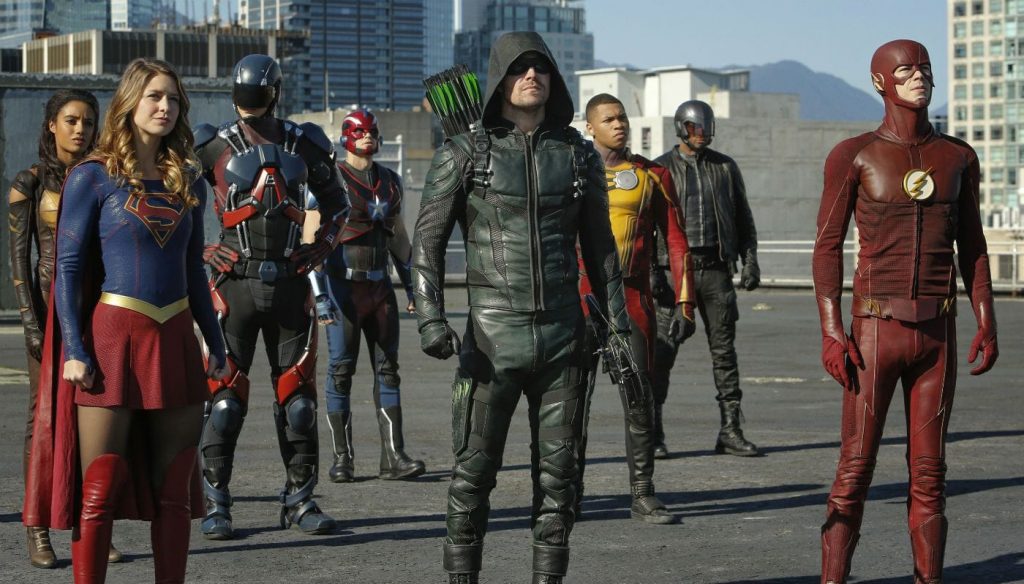 It would be glorious.