Cave Carson and Harley Quinn thrive in their own psychedelic world crafting some creatively brilliant stories.

Batwoman tries to rise above the constrictions imposed upon her by her past while the Green Lanterns fail to make the grade for their futures.

Super Sons and Injustice 2 continue to excel is quality, both in writing and art and I hope they continue to do so.

This is my look into the DC Universe this week. 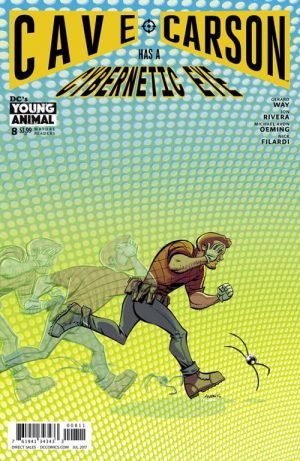 Cave has recovered and thanks the rag tag band of heroes for their aid and apologises for getting them hurled through alternate realities chasing the EBX monsters.

The team head out to find Cave’s mentor Professor Bartow in hopes of finding a way to defeat their enemies. Somehow the mutants discover their whereabouts and attack while Cave experiences an excruciating link to his missing cybernetic eye and it leads Team Cave to a new path across the multiverse…

The title continues to impress on both the art and writing sides and shows no signs of slowing down.

I am curious as to how this will continue, the story has more twists and turns than the Might Mole’s subterranean tunnels.

The character relationships are fun, especially Chloe and Cave. Wild Dog’s cutting humour and one liners have me wishing he gets a title of his own again. There hasn’t been an issue yet that I haven’t thoroughly enjoyed. 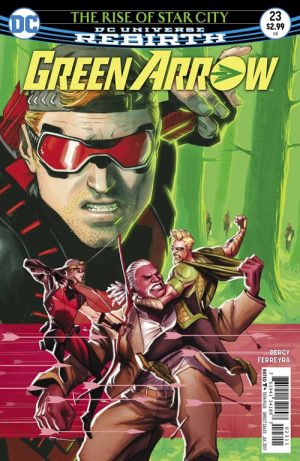 As Black Canary & Victoria Much turn detective with the Queen family history to discover the truth, Emi seeks answers of her own with Arsenal at the water treatment plant.

Ollie races to the Ranier forest and discovers his new base has been burnt to the ground with a devastating casualty.

Distracted by rage, Ollie is caught in a fight to the death that ends with a betrayal and the destruction of a famous monument, can things get any worse for Team Arrow & Star City?

The Rise of Star City feels like it has been building up for years, not in a bad way, but in terms of escalation.

Everything that has been set up over the past twenty plus issues is coming together, if you go back and read through some of the back issues you’ll see the hints were always there but we didn’t even notice. Percy has really outdone himself with this run and Ferreyra also has delivered some truly stunning artwork.

I really enjoy the fact this story thrives on his vigilante status and that he had a strong supporting cast. 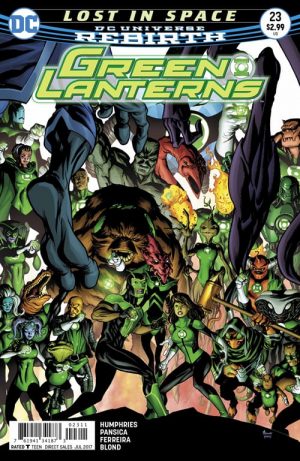 Guy Gardner is a hard taskmaster and Jessica finds it more than a little difficult to keep up with her drill sergeant, while Simon is faced with the cunning training of Kyle Rayner.

If they fail they will lose their status as Lanterns of 2814 and the duo face their toughest challenges separately.

Kyle outsmarts Simon and shatters his confidence while Jessica is pushed so far there may be no going back – ever.

An unexpectedly enjoyable issue. From last issues set up, it was already clear both Baz and Cruz were going to fail so it was no surprise they struggled with the strict training regime.

I actually enjoyed Guy and Kyle more for their differing styles of training and the comedy element that introduced. The story is dependent on the Hal Jordan title for foreshadowing and that’s a bit of an annoyance, but nevertheless Humphries and Pansica do their best to introduce some much needed layers to their side of the story. 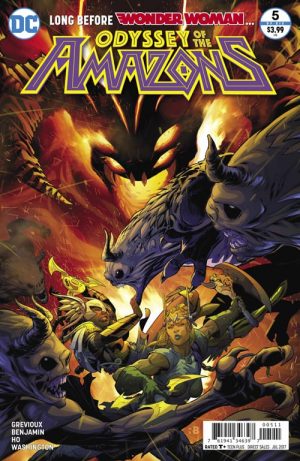 The imprisoned Amazons and Valkyries at the Jotun camp hatch an escape plan while the Jotun Queen seeks out the demon Surtr to aid her cause.

As the rescue team of warrior women intervene with deadly force all side suffer terrible loss until the Jotun Queen reveals she has already created a master race of women – The Amatuns.

Could this be the end of both the Norse and Greek warrior women’s tale?

Another predictable end, but we are now nearing the end of the story so the conflict between Amazon, Norse, Jotun and Amatun promises to deliver an epic conclusion.

I liked the scenes with the captive women refusing to give up and concocting an ambitious escape plan but to be honest this story still feels needlessly overlong.

I look forward to the conclusion and to see what, if any, after effects it has for Wonder Woman and the Amazons. 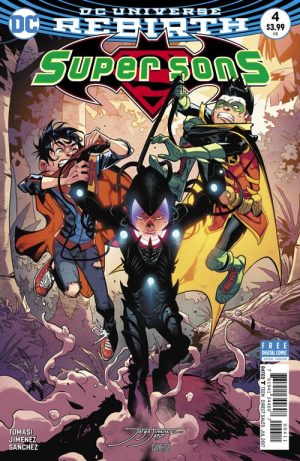 Jon and Damian are captive of Kid Amazo and while he is distracted by their arguing he reveals he has been plotting to destroy the Justice League.

Damian reveals he had activated a signal in one of Kid Amazo’s robot and help was on the way.

It isn’t Superman or Batman that arrives, but Lex Luthor, and he isn’t happy.

Superboy and Robin grab the civilians as Luthor and Kid Amazo duke it out, however the Amazo doppelgangers overpower ‘Superman’ and Kid Amazo puts his final plan into action.

Merging into a monstrous Amazo creature he attacks but an unexpected ally arrives to turn the tide.

The danger isn’t over as the two children arrive at the Kent farm to be greeted by a very angry Lois Lane and Alfred Pennyworth.

Can anyone say… grounded?

The first arc has been quite a ride hasn’t it? I really enjoy the dynamic between Jon and Damian, their constant sparring and personality clashes are the absolute strength of the book. Not only that but they are extremely young and going toe to toe with more mature foes. I am not sure about Kid Amazo, he was innovative but I hope we see fewer ‘kid’ foes in the future.

Jorge Jimenez crafts an absolutely stunning issue, and the balance between comedy, action and drama is played out with a burst of energy that I feel is unequaled by any other DC book. 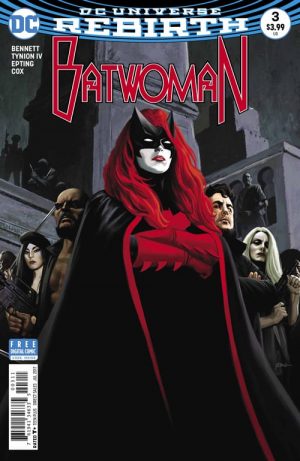 Batwoman #3
‘The Many Arms Of Death’ Part Three: If I Had A Heart
Written by Marguerite Bennett & James Tynion IV
Pencils Steve Epting
Inks Steve Epting
Cover by Steve Epting

Batwoman’s identified the cancer spreading through the lawless nation of Coryana.

Kate can’t hope to fight this plague of villainy without the aid of those she despises the most. Will the worst of Coryana’s criminal scum join forces with Batwoman or will a deadly bombing plot come to pass?

As each issue passes the title gets stronger and stronger.  This is grea,t but the build up is slow and for a late starter in Rebirth, I feel we aren’t there yet.

I wish Kate was as strong a character as she was before the relaunch. I appreciate the exploration of her past and relating it to the story in the present day and as I said it’s going from strength to strength.

I just wish it would get there faster. 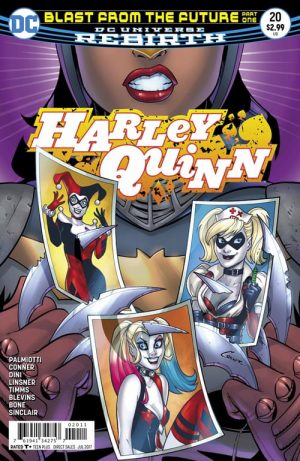 Bat Fan has been aiming to travel back in time to change the past… but the change she needs to make? Kill Harley Quinn or let all existence blink out.

Harley Sinn crawls out of the woodwork with bad news for Harley and in the meantime Bat Fan teleports into the Batcave and uses the tech there to hunt down the clown princess.

Their meeting is far from pleasant and the fate lies in only one winner.

In the backup story “Harley Loves Joker: Part Four”, Harley and Joker’s pear shaped robbery forces them to hide out in a low-rent motel… That would be bad enough but the room proves a tight squeeze with Bart, Lou and a gang of thugs joining them to hide from the Caped Crusader.

The Bat Fan story has been brewing away slowly in cut scenes for a few issues now and it finally comes the fore. Harley Quinn is a fun book that doesn’t shy away from comedy or over the top violence, in much the same fashion as Deadpool – though she is far less off the wall than the Merc With a Mouth.

Here there is more story to play with and the scenes in the Batcave were all about the quirky fun. It’s unlikely Harley will meet her end, but it will be an entertaining journey and that makes the book a really fun read. 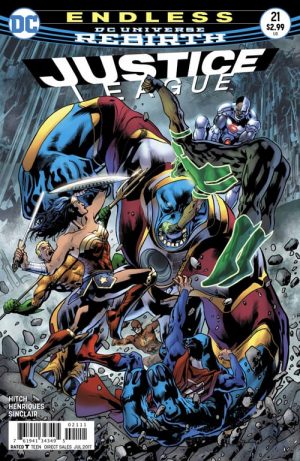 The big explosion sends the Flash back in time to the beginning of his encounter with the creature outside the laboratory.

Realising he can stop everything from happening Flash confides in Batman and soon they set a plan in motion to change all the things that went wrong.

First, to make sure that the civilians including the spike/hammer wielders family are safe away from potential the blast radius.

Confronting the scientist he finally reveals the hammer is part of alien technology that Argus provided for them to experiment.

The laboratory discovered its energy potential and decided to monetise its power. This time however the creature that attack the Justice League is the change they make – this time they allow it to win its fight against them and the outcome is very different…

Aside from the ending foreshadowing a big finish to this series of storylines ‘Endless’ ends up being a disappointing two-parter overall. It is a shame as the first part was full of promise and was had some very creative storytelling. The second part herein played the story out but it was predictable, and dare I say it, boring. I know it is filler before this dig event begins, but even a two-parter or ‘done in one’ shouldn’t feel that way. 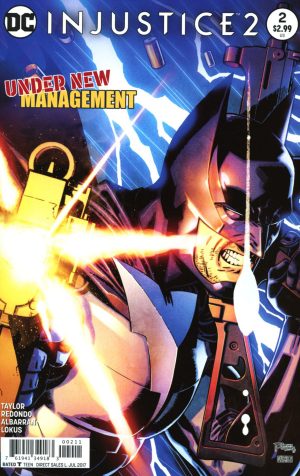 The Batman takes control of the entire Suicide Squad, including the reserve members Amanda Waller had captive and reveals he is now their leader.

He activates the bombs in several of the weaker villains to thin out their number and escorts the other to safety ready for their first mission.

The real Batman arrives to rescue Harley Quinn but his doppelganger bests him in combat and the horde of villains escapes.

Later an injured Bruce finds he was rescued by Batgirl, Lucius Fox and the now returned Black Canary and Green Arrow.

The niceties have to wait as Dan Turpin calls with shocking news, the prison holding Superman has lost power and without it the city will be overrun with villains and a very angry, repowered Man of Steel!

Injustice 2 is a book that shouldn’t work, tie in rarely do but as a continuation of both the first game and its own tie in Tom Taylor takes everything that was built upon that admittedly also superb book and doubles the thrill factor.

The culling of the Suicide Squad had me wide eyed as it played out. Of course we are treated to the first ‘mirror match’ but it doesn’t feel cheap at all in fact it all works towards the set up of forging new alliances. Redondo art escalates too but perhaps that’s because of the action scenes, I don’t care it looks fantastic.