Cyborg Superman you have me perplexed – who is writing the real one? Steve Orlando or Dan Jurgens? Whoever it is one character will suffer for it. Apart from that mystery it is time for you to go back and enjoy back issues as both Gotham Academy and Wonder Woman are delivering some superb writing.

Lana Lang unlocks the power of Superwoman just in time to take on a deadly foe that hunts children. Hal Jordan is embracing the past while endangering the future, Velma Dinkley is putting her house in order and Killer Frost turns a corner which might change the JLA forever…

This is my look into the DC Universe this week! 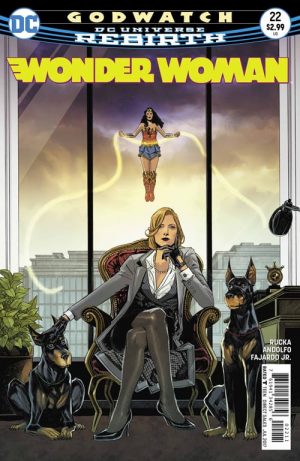 Beating Bruce Wayne & Lex Luthor in a charity auction, Veronica Cale uses her winning an evening with Wonder Woman to mine her for information on Themyscira and get the measure of the Amazonian princess.

Diana plays along but in this first meeting, has she already realised Cale is not as innocent as she seems?

It has been a while but we finally get a bit more back story to Veronica Cale and it’s played out very well adding more to both the past and present storylines.

The artwork really brings the story to life, kudos to Mirka Andolfo for providing that little bit extra with some brilliant visuals. As we near the end of the run by Greg Rucka it is just starting to hit me that it really will be the end of a truly special era. 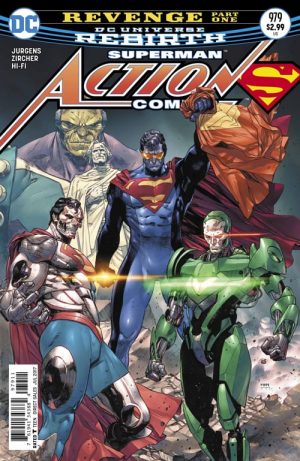 While Lois and Clark are apartment hunting, the Eradicator rescues Mongul and convinces him to join their team. The villains raid the ruins of the Himalayan Fortress searching for a powerful artifact hidden inside. They murder others living inside and smash Kelex before escaping to the the Lunar Batcave.

Hank Henshaw reveals his identity and tells the villains they have one last villain to enlist before they can all finally seek revenge.

So is Zor El Cyborg Superman or is Hank Henshaw?

A brilliant issue if not for that as it not throws the opening five issues of Supergirl into continuity madness. Lois and Clark apartment hunting was a breath of fresh air, and it is nice to see them just being a couple.

The balance between their relative normality and the plotting of the Revenge Squad is skillfully written, but then I’d expect nothing less from this team! 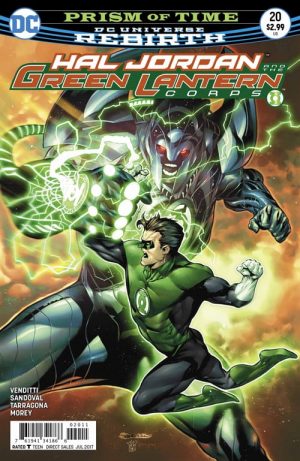 The bugs prove unstoppable forcing the Lanterns to a stand still. As Hal battles them he realises that the gauntlet he once wielded may have created their foes and the two lost Lanterns disappeared in the sector he buried it.

Sarko, the visitor from the future is indeed tapping into the power of the gauntlet and if he succeeds Rips future prediction will come true.

Tying into the recent Hal Jordan and the emerald Gauntlet era and making it relevant not only to today but also the future is a stroke of genius that expands upon the rich storytelling and gives Hal’s fugitive period new meaning. I’m still unsure about Sarko and Rip was next to useless this issue, but I like the way Vendetti has brought all the storylines together. 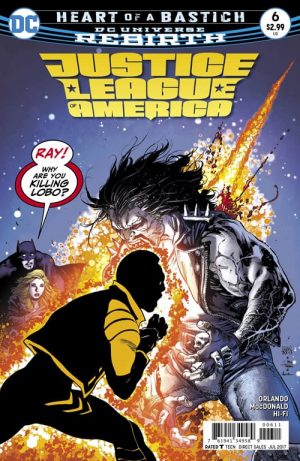 Aegeus supernatural weapon has poisoned Lobo’s heart and if Ray doesn’t perform some horrifying surgery the poison will spread, and prevent the Czarnian from healing. Meanwhile the JLA battle the Khund villains magical forces with Atom at a standstill against their leader.

The team pulls together and Lobo comes back stronger than ever – unfortunately for Aegeus!

I realise now that the below par villains are deliberate. It was something I couldn’t figure out till now but it took Lobo and Frost to wake me up.

This book is thriving on character and that is one thing Orlando knows all about. It might sound silly but it really isn’t their superpowers that make this team powerful it is their strength of character. I’m not sure why Lobo is holding back but one day he is going to release his inhibitions and when he does – well I don’t think anyone will be able to stop him. 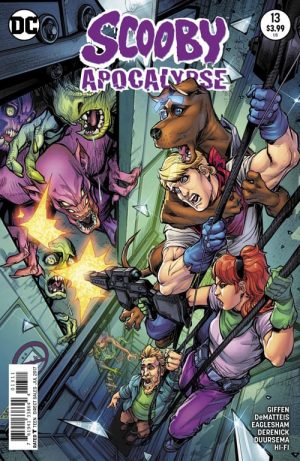 Velma realises her nanite technology was stolen and abused by her brother, Rufus T. Dinkley.

The apocalypse is his fault and only Mystery Inc can clean up the mess but while sister is hoping to discover a cure, brother is intent on ruling the monsters as his slaves – the Dinkley family are not very harmonious!

Sickened by her former lover’s plan, Daisy aids the gang in escaping leaving Rufus at the mercy of his creations.

Cliffy and Scrappy are on Velma’s trail but they are struggling to survive. Scrappy hunts several of the monsters for food and tries to get Cliffy to eat. The boy struggles and the relationship between the two becomes strained. Will they ever make it out of this apocalypse alive?

It is taking a while but Scooby Apocalypse is beginning to grow on me, it is more like an alternate universe story than classic Scooby but it is shaping up to be a really good ‘world’s end’ storyline, I’m even enjoying the Scrappy Doo story – that’s right I said it. Giffen and DeMatteis know all about mythos as they also helm Blue Beetle. This is a remarkably dark tale and it isn’t for everyone. For me its a fun take on the legend of Mystery Inc. and I am enjoying seeing this play out. 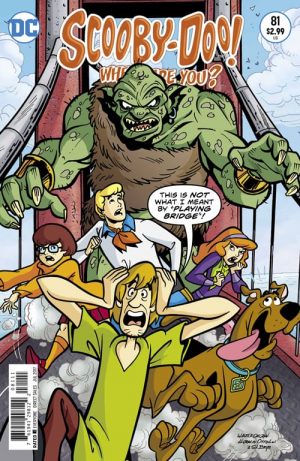 The opening of a new suspension bridge attracts the attention of a giant troll who promptly moves in underneath it. Scooby and the gang are called in to investigate only to discover the beast still there terrorizing anyone that comes close. The gang investigate further and find the trolls amazing secret, along with a criminal master plan that only Mystery Inc can uncover.

Velma teaches us the story of the strange Japanese legend of the race of cursed women, the Rokuro Kobi and their sad spooky secret that scares their husbands to death. Is the legend scary enough to frighten Shaggy and Scooby from their midnight snack?

Extreme Homewrecker‘s latest episode is the demolishing of the mobster, Bugsy Swarm’s old house.
The only problem is the ghost of Bugsy wants to stop them before they demolish his house. Scooby and the gang arrive to save the day and unravel a shocking mystery that could kill them all or be the best episode of Extreme Homewrecker ever!

Three enjoyable stories that bring the nostalgia in spades but they still offer something new by Fisch & Rozum craftily and creatively writing in some twists so the endings are not as you’d expect them to me. The art looks great, just like the tv show breathing life onto the page. As an old geezer that remembers this as a classic, revisiting the past in these pages is an absolute treat. 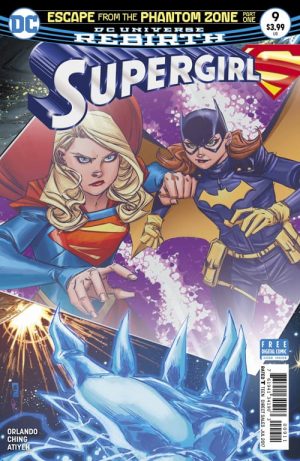 Ben and Barbara are investigating Tychotech and arrive for the press conference of their newest invention. The DEO is interested in the tech too and send in Supergirl to investigate as it appears to be stolen Kryptonian hardware.

The Tycho Eidolon is unveiled and as it activates the villain Magog appears in hopes of drawing out the Justice League and killing Supergirl for something she is destined to do in the future.

Batgirl, Ben and Supergirl are sucked into the Eidolon which turns out to be a vacuum into the Phantom Zone while Magog escapes swearing to return with the Fatal Five one day.

Meanwhile the Phantom King realises that Supergirl is now in the Phantom Zone and with her comes a means of escape and a deadly plan for revenge against the House of El.

This issue wasn’t as strong as I’d hoped jumping straight into the action rather than show Kara and Barbara investigating Tycho as I had expected (following Batgirl’s annual) but we have a surprise attack by Magog foreshadowing more of an arc to explain Supergirl’s future actions against the Fatal Five. So if you wanted action – this was the book to find it in, throw in a touching nod to the 1984 movie and one of DC’s deadliest villains and all is forgiven.

Still considering what just happened in Action it would have been nice to see what has justhappened there addressed and I am still hoping Kara Danvers gets to shine a little soon. 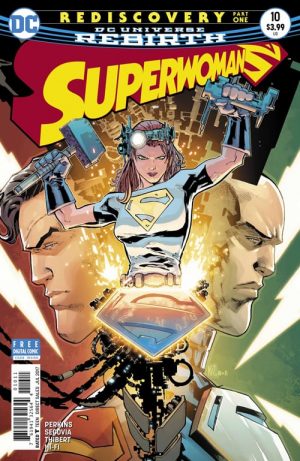 Natasha and John run tests on the Insect Queen armour it is attuned only to Lana’s unique biology and Natasha reveals somehow it seems to still have a link to Kryptonian energy. When Lana dons the suit it begins to supercharge and whilst in it she can be Superwoman once more.

Meanwhile Skyhook the evil demonic creature that preys on children has arrived in Metropolis and has set his sights on someone close to the Irons family. Is Lana ready to jump back into battle or is it too soon?

K. Perkins takes on the reigns of Superwoman following the the epic first arc by Phil Jimenez, and that mere fact meant there was a lot to live up to.

To negate the fact Lana was powerless there was a long drawn out and contrived ‘repowering’ storyline that aimed to quickly get Lana back in action… it wasn’t good I’m afraid but it was a means to an end and the rest of the issue was actually really, really good. Skyhook has always been a favorite villain of mine, criminally underused and perhaps one of DC’s darkest most vile ever to grace the pages of a comic. Aiming the rest of the story at the Irons family was exactly the right thing to do and though it was rushed, at least next issue K. Perkins can start fresh with minimal baggage. 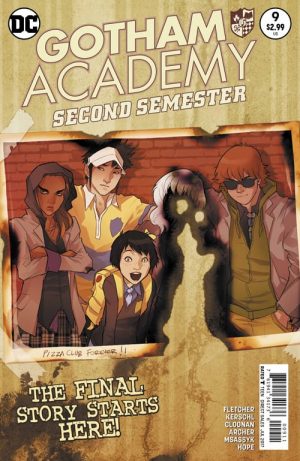 The ancestral home of the Dent family is burning down and Olive surmises that Harvey will return when he hears of it. The youngster is right but as she confronts Harvey, he realises she is as damaged as he is. Seeing a kindred spirit in one another they decide to look into the fire and come up with a common enemy and swear to make them pay.

Can Daisy’s friends stop her and save the day before it’s too late? It isn’t looking good.

Gotham Academy has been one of the most creative ‘Gotham City’ books in years and I can’t believe we are gearing up to the final act.

Still it seems they aren’t going out with a whimper as we begin an arc that goes back to the roots of Gotham itself and the kids are immediately thrust into a dark tale that pits two of Batman’s rogues against one another with Olive caught in the middle. This book is fantastic, check out the back issues, you’ll thank me.