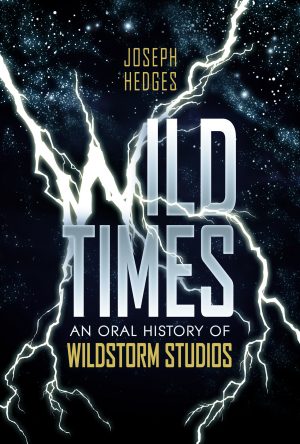 This Kickstarter project is now available to the general public, a 450 page book about Wildstorm Studios. This book covers how it was formed, and how they ended up. It’s an interesting enough read. Despite my interest in the subject matter, it came across a little drier than I expected.

This book compiles tons of interviews into a narrative, much like the “Live from New York” book about the beginnings of Saturday Night Live. Hedges certainly did his homework and it shows.

From Garth Ennis, to Gary Frank, to countless others, we get a first hand look at what happened. Some stories were better than others. J. Scott Campbell has a lot of stage time here and after awhile he bores you as do a few others.

Yet, while reading it I felt there was something missing.

That element? That would be Jim Lee the guy who actually founded Wildstorm.  Without Lee, there is no real merit to the project. He’s the guy who who formed the entire company. There’s no insight from him in regards to leaving Marvel, forming Image and then creating his own studio that became so successful that he was able to sell it to DC Comics. It’s a glaring problem, and no matter how many times he’s mentioned, there is no perspective from Lee. That makes it go south a little bit.

I would have also liked to have heard from Travis Charest as he’s an interesting figure in the formation of Wildstorm and he ended his time there badly. I would like to have heard from his perspective.  Many of the missing contributors come from people are closest to Lee including inker Scott Williams and WildC.A.T.S. co-creator Brandon Choi.

Another unfortunate omission is a lack of any artwork.  I understand the concern over using copyrighted material, but under journalistic use, it would have been nice to see lots of art examples and photographs.

Still, this is a well researched book. I’m not sure how much we needed it. Is it a book telling you stories you couldn’t wait to hear? No. Is it a decent enough book however with some interesting tidbits? Absolutely.

Kudos to Hedges too for seeing it through. He still has time to get those Lee and Charest interviews however.