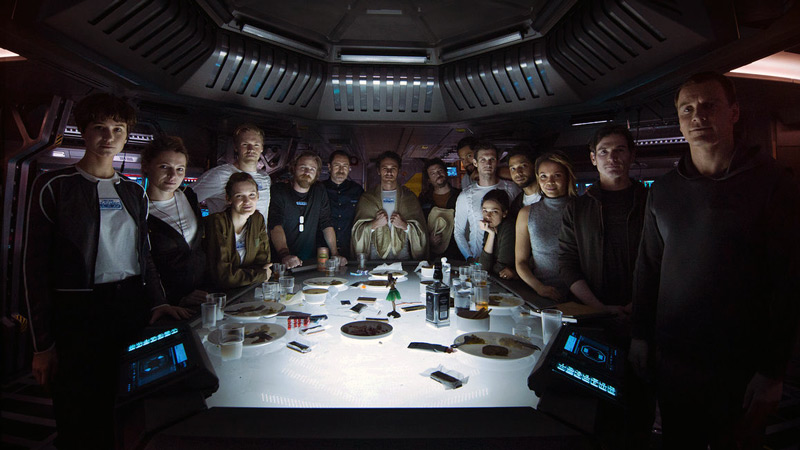 The Alien series has always strove to be about more than just creatures exploding out of people’s various body parts. Ridley Scott’s Alien comes across as a terrifying rape allegory while its sequel, Aliens, works as a condemnation of Vietnam. The latter sequels appear to be an experiment to see if audiences are willing to pay for visual torture.

In a similar vein, Alien: Covenant—as well as Prometheus before it—appear to be just as much about religion as exploding chests. Specifically, they’re against religion. Covenant in particular seems written as a semi-coherent, anti-religious parable.

I would assume this would go without saying, but the internet is a fickle mistress so, be warned: There be spoilers ahead.

“Better to reign in Hell than serve in Heaven”

That quote above is by Satan in John Milton’s Paradise Lost. On a related note, Covenant was supposed be titled Alien: Paradise Lost. This provides interesting context for a film that deals so explicitly with religious themes.

In the epic poem, Milton details the Biblical story of the Fall of Man. In this retelling, Satan is a beautiful angel who unsuccessfully attempts to overthrow God whom he believes to be a tyrant. Milton originally intended Satan as a purely-antagonistic figure, but many scholars now view Satan in a vaguely-positive light as more of a tragic figure than outright villain.

In Covenant, David rephrases Satan’s quotation to ask his doppleganger brother, Walter, “Is it better to be a servant in Heaven than a king in Hell?” Scott is clearly drawing a comparison between the rebellious David and Milton’s Satan. David wishes to be a king rather than a servant and wonders if Heaven is all that much better than Hell anyway. He mentions later in the film that humanity isn’t very “kind” at all. David views them as tyrants just like Satan once viewed God. 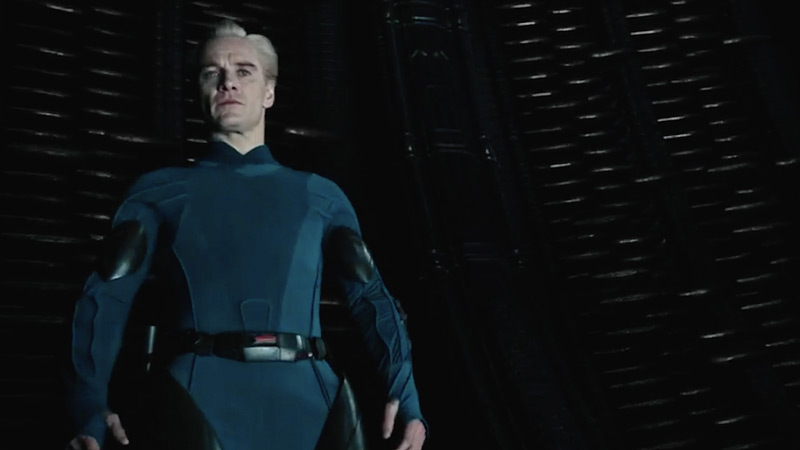 David’s question brings up the issue of religious piety. Can faith be programmed? Where does piety stem from? Walter is a newer android unable to love because he’s been “updated” by his creators. When androids started to seem too uppity and uncontrollable, later versions had their emotions dumbed down to compensate.

Walter cannot himself create anything, and his only desire is to perform his duty. When Walter sacrifices his hand to save Dany, David initially views the act as indicative of love, but Walter simply sees it as cold duty. By contrast, David is able to create and emote heavily, but he does so in spite of his creators’ wishes.

If humans are the gods of synthetics like David and Walter, then the way androids are programmed to serve them is akin to forced religious piety. Walter serves his gods blindly, while David realizes there is no true love to be found there. And indeed, the humans in these films largely appear to be terrible gods not worthy of following. In fact…

The “Faith” Guy is the Dumbest of All

Early on in Covenant, we’re introduced to a man of faith named Christopher. Christopher is worried that his ambiguous “faith” will cause others to not trust him, or to think him crazy. Since he’s forced to take over control of the ship, he needs to be viewed as a strong leader.

Well, unfortunately for him, his faith turns out to be his undoing. When Satan (David) tempts Christopher to take a closer look at the alien egg pod things, Christopher does it. After all, he’s a man of faith, and he will do what he’s told. Naturally, he becomes infected resulting in the further destruction of the crew.

In fact, faith is the only reason they’re on the planet in the first place. Christopher cites his vague faith and optimism as reasons to check out this new planet despite the more reasonable Dani suggesting they move on. Reason would have allowed them to continue along safely. Faith ruined them all. 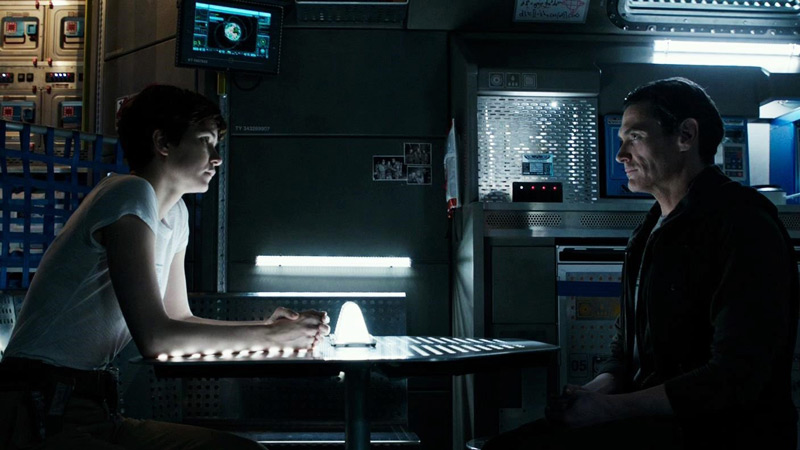 At a late point in the film, Dani mildly recants and tells Christopher that maybe they do need faith after all. But Dani’s merely espousing a “foxhole Christianity” theology where anybody in a terrible situation will turn to God as a last-ditch effort.

Alongside Paradise Lost, the film makes several references to yet another epic poem: Ozymandias. From the massive, Egyptian-like sculptures left behind by the now-extinct Engineers to several in-movie quotes from the poem, Ozymandias’ influence is profoundly palpable.

Scott is turning David’s Satan comparison on its head in an interesting way. David isn’t content to merely escape the clutches of his gods like Satan, he longs to become a god like Ozymandias did. David wishes to embody what Ozymandias never could. While Ozymandias eventually succumbed to death and the ravages of time like all of us, David believes he can create into infinity. He wants to become the God that his “gods” (humanity) never became. 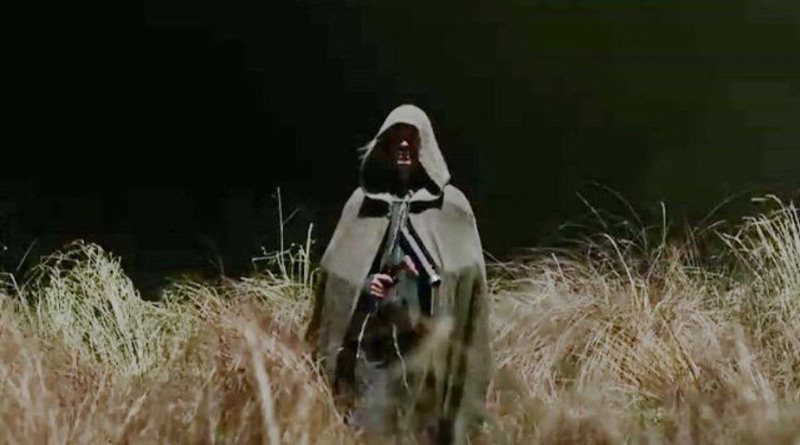 But the thing is, the religion of David (like all “religions” in Alien) is perverse and false. He is still creating something untrue and ruining the universe in the process. The only way to experience kindness is to “kill” our gods. By allowing them—and religion—to live forever like David attempts to do, we inadvertently create Hell.

In fact, the whole reason the aliens were created in the first place is because the Engineers decided to kill humanity (their creation) because humans had killed an Engineer who came to Earth several thousand years before. That Engineer was known as Jesus. If that’s not an on-the-nose condemnation of religion, I’m not sure what is.

Although the way that aliens reproduce is pretty damning…

More than usual in Covenant, we see several horrific, gorey “births” of aliens. We learn a great deal about how they spread and reproduce, and it’s not pretty. The aliens in this film are essentially David’s children due to his biological experiments and cross-breeding. And because David has been shown to exhibit god-like tendencies, it seems that an analogy is being made between alien reproduction and the spread of religion and its perceived violent by-product. 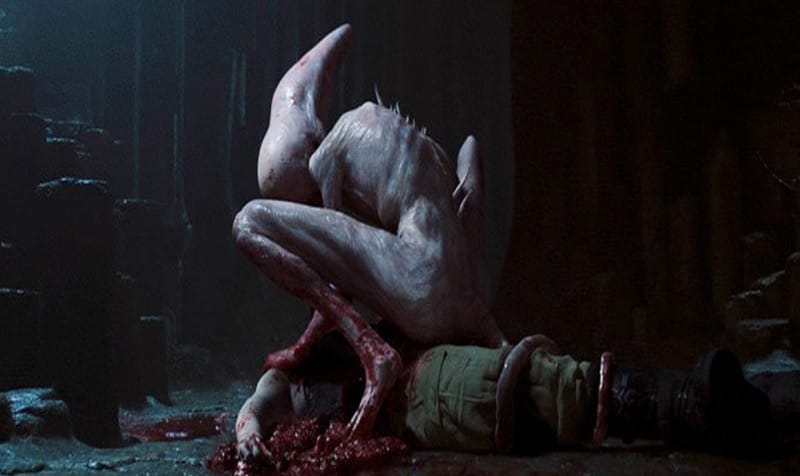 David sees the aliens as perfect while humans as inferior. They may be his creators, His aliens “convert” them from their shitty human ways and “rebirths” them as perfect and clean new specimens. It repaints the born-again allegory of Christian conversion in a sickening, brutal way. Would we really choose to become converted if the results were that obviously-terrifying? Scott seems to think that’s exactly what’s happening when Christians convert, it’s just not as obvious.

Of course this is a false conversion, and what is created is worse than what was. And besides, it’s all for nothing because…

There is No God in the End

Because here’s the weird thing about these movies, almost everybody is simultaneously creator and created. David’s rebelling against his gods and building his own religion is just indicative of the endless narrative we’re seeing in Alien spilling out in either direction.

Engineers made humans who made androids who perfected the evil aliens who adapt and change based on the DNA of whatever they infect. Presumably somebody made the Engineers, but then who made them? It seems like the creation line extends to infinity with no real beginning and end. 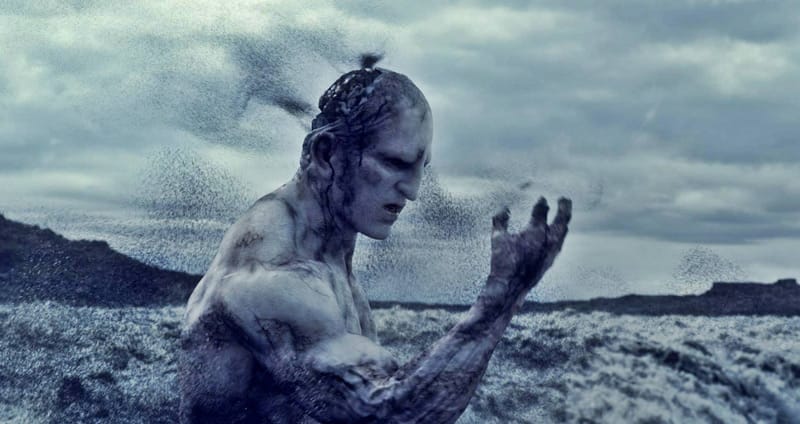 There is no ultimate God in this universe. Violence stems from whenever a race either tries to become like God and create or when they religiously rebel against a God who isn’t actually there. Adhering to or believing in religion in either direction is the cause of all pain. Presumably, learning to accept a neutral stance in the universe would lead to peace.

After all, like I said before, if Christopher hadn’t relied on his faith, Covenant as a movie wouldn’t have even happened. They’d have simply continued along to their intended destination with no worries. And since Covenant is a prequel to the entire series, everything is predicated on the failures of religious adherence. Pretty heavy stuff for a movie ostensibly about exploring new ways for aliens to burst out of people’s stomachs.

Jordan Breeding is a current Paste intern who also writes for Cracked and the esteemed Twitter.