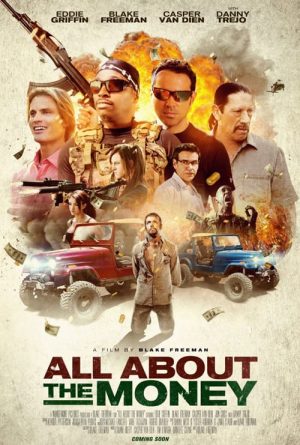 Have you ever wondered just how easy life would be if you had more money?

You would no longer have to choose between paying rent and eating. Imagine living in an expensive home, designed and furnished by HGTV or forever partying on yachts or simply doing nothing.

While life doesn’t always end in caviar dreams and champagne wishes, for the small few there is luck — whether it’s winning the lotto or getting a massive reward.

Back in 2015, the feds offered twenty five million dollars to anyone who caught El Chapo and even though no one was eligible for the dough, that didn’t stop a few from trying.

That’s where All About the Money comes in. This is a movie based on testing luck when Vincent, a down-on-his-luck man who decides to risk it all to capture America’s most wanted drug dealer and claim the $25 million bounty on his head. Like any stupid plan, he has not combat or military training so he enlists the help of his friends Christopher (Eddie Griffin) and Kurt (Casper Van Dien) by tricking them into taking a vacation to Colombia just to surprise them with the bounty opportunity. From there, chaos ensues as we’re introduced to Luis Diego (Danny Trejo) and other misfits who are determined to make this movie even more crowded.

Despite the action-packed adventure of the script, All About the Money is horrendous and painful to watch after the first twenty minutes. Playing out like a forced Adam Sandler Netflix deal, writer/director Blake Freeman makes repeated attempts to present new and exciting adventures for the characters but wastes them with stumbling and bumbling characters (led by Freeman himself) and moments. Jokes are delivered with a thunderous silence as the dialogue feels written by someone who just learned how to spell. At the end of the day, the movie has nothing new to add to the film industry.

In fact, minutes after watching the film, I quickly forgot about its existence.

Eddie Griffin was never a talented actor but he seems to flounder about, being the stereotypical loud black man delivering attitude, stares, and unfunny one-liners. Clearly he signed up for the role to pay the rent. He brings nothing exciting to his character.

Freeman, is clearly out of his element as he tries to cover up his lack of skills with Danny Trejo’s screen time. Trejo is the only actor who manages to never do wrong despite playing the same character repeatedly.

However, there’s nothing truly threatening about him in this film, which is unfortunate since he plays bad so good. Even for a comedy, the movie never took the opportunity for Trejo to flex his funny bone as there was nothing enticing about his existence. At the time of the day, he becomes tiresome.

Despite everything contributing to this movie’s downfall, the action is rather enjoyable for a low-budget movie. Opening with a shoot-out, it immediately draws your attention. As the action becomes more ridiculous, it slowly begins to overshadow everything else. This is fleeting as the mundane acting takes its rightful place.

Exasperating and exhausting, All About the Money should disappear into the abyss from which it came. There is truly no reason for anyone to watch it aside from wanting to torture themselves. Poorly written and acted, this movie is an example why sometimes people don’t deserve nice things — like the ability to have movie created just because they can afford to.

All About the Money is now available on Digital HD.