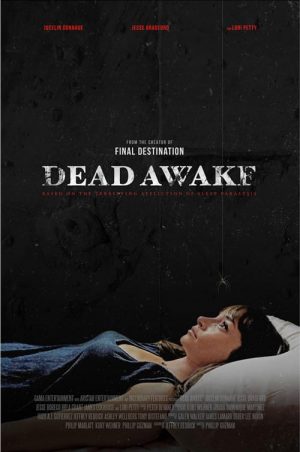 When Beth Bowman dies mysteriously in her sleep, her sister Kate starts to investigate Beth’s night terrors. Unfortunately for Kate, her research prompts night terrors of her own and subjects here to attacks from a supernatural force. Kate must then join forces with Beth’s boyfriend, Evan, and an old friend, Linda, and seeks help from Dr. Hassan Davies, a sleep specialist whom Beth had consulted.

Explaining that the night terror’s phenomenon known as “Old Hag Syndrome” is actually a predatory supernatural force, Dr. Davies aids them in their fight. But how do they conquer a force from the dream world?

Writer Jeffrey Reddick (best known for the first two Final Destination films) has crafted a solid story with believable and likeable character while director Phillip Guzman has made a fine film with great atmosphere and some memorable scares. My only criticism really is a stylistic choice rather than an actual problem, this is the look and demeanor of the supernatural being. I’m getting a bit tired of the post “J Horror” boom of weird erratic ghost movement á la The Grudge or Ringu.

Aside from the technical aspects Dead Awake also features a strong cast with Jocelin Donahue (House Of The Devil and Insidious 2) playing both Kate and Beth Bowman, plus an appearance by Lori Petty (Tank Girl and Orange Is The New Black).

Overall, Dead Awake is a tense supernatural thriller with good scares and good characters all while being a more interesting exploration of night terrors than the acclaimed 2015 “documentary,” The Nightmare.

Check it out, but maybe not right before you have to go to sleep!