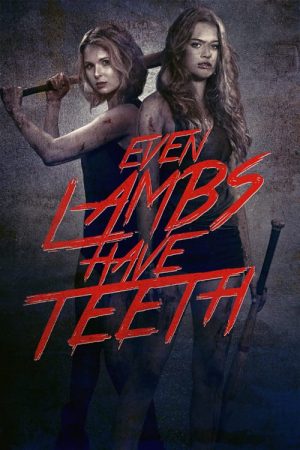 Katie and Sloane are best friends who have decided to head to a rural organic farm and work for a month in order to fund a weekend shopping trip in New York. After being dropped off at the farm’s pick up point by Katie’s FBI agent Uncle the two girls decide to take a ride from two local’s rather than wait for the bus.

What happens next is a virtual grab bag of tropes and cliché’s from the “rape revenge” genre as Katie and Sloan are drugged and held captive by two brothers. The girls are kept chained up in shipping storage containers and a re visited by guests of the brothers until the pair breaks free and seeks revenge.

One might consider that synopsis to be too spoilery but I have mentioned literally nothing that isn’t either shown in the films trailer or telegraphed by the film’s sub-genre.

Even Lambs Have Teeth is an incredibly slick looking film with solid camera work and a great amount of care paid to its sets. Unfortunately the praise ends there as the film’s story is little more than a mish-mash of Last House On The Left, Mother’s Day, Taken, and I Spit On Your Grave among others only without the drama tension, and character development of any of those films.

To be honest, and this might sound very un-PC, but if you make a rape revenge film in 2017 your movie should build off of the reputation set forth by the four decades this sub genre has existed in the horror / exploitation world and not deliver a film that is relatively tame and devoid of any tension or scares. Our set up for the two main characters is that they want to go shopping and that one of them is the wild one while the other is the cautious one, through this lack of established depth and the fact that much of the pairs ordeal happens off camera there is little tension set up around their well being and survival. Likewise with the movies bad guys, we get little to no motivation and when it comes to the revenge portion much of the more intense stuff is implied and happens off screen.

Now some sources state that the more graphic violence being more implied than outright was an intentional choice on the film maker’s part but frankly it just weakens the film overall because it’s a horror film with no tension and an revenge film with little payoff.

Given that Even Lambs Have Teeth seems to be mostly cobbled together ideas from better movies you’ve probably already seen and limits itself so much by implying much of the stories darker elements I can not recommend watching this film. But since you can already figure out what happens in the story you can just imply that you’ve seen it.