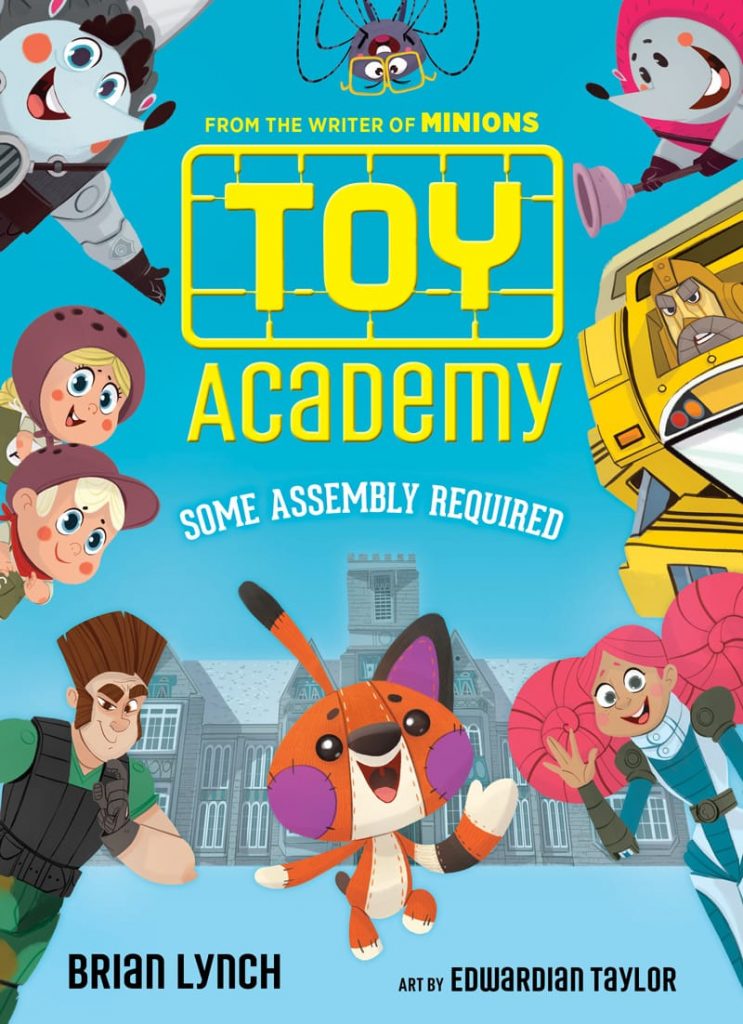 In recent years, writer Brian Lynch has made his mark in both comics and film, writing such properties as Bill and Ted for BOOM! Studios, Teenage Mutant Ninja Turtles, Spike, and Angel (with Joss Whedon) and and creating his own Monster Motors for IDW Publishing, as well as the animated films Hop, Puss in Boots, Minions, The Secret Life of Pets and it’s upcoming sequel.

His next project, Toy Academy: Some Assembly Required, arrives next January, the first book in a new, fully-illustrated chapter book series which he will be writing with art by Edwardian Taylor.

Brian took a few minutes to give us the skinny on the upcoming series.

FOG!: Congratulations! Scholastic announced your upcoming book, Toy Academy, last week. What’s the book about and what was the genesis of the project?

Brian Lynch: Thanks so much!

The book is about Grumbolt, a tiny handmade doll that is new to the world and wants to learn how to be a toy. He finds out about Toy Academy, a secret school for toys that is only accessible via an old thrown away playset. At Toy Academy, the teachers show a younger generation of toys how to be the best toy they can be. Action figures learn how to be heroes, stuffed animals learn how to hug and sooth their kid, collectables learn how to retain their value, that kind of thing. It was founded by a very popular action figure from the 80s that wanted to give something back to to the toy community.

Grumbolt thinks it’s going to be a piece of cake, after all, how hard can it be to learn how to play? But it’s not as easy as it looks. He’s not even sure what kind of toy he’s supposed to be to begin with. His room-mate is a paper doll who is very fragile and very worried about ripping. The school bully, who is loaded with accessories and action features, has Grumbolt in his sights. And there’s a rival school, that teaches any villain in a toyline how to be bad, that’s amping up their rivalry with Toy Academy just as Grumbolt gets there.

As someone who has written both comics and films, what inspired you to write this as a book?

I had the story and characters in my head, they were kind of itching to get out and live.

Writing it as a book just felt right. It’s a very general answer, but that’s the truth. I knew it was going to be a continuing story. We begin with a group of toys and, if people like the first book, we can meet up with them a little later and follow them through their time at the school and eventually out in the real world after they get jobs (as a kid’s toy). A book seemed the way to do it.

Certainly the Harry Potter books were an inspiration, it was so fun to check in with that class and see how they’ve changed. But even before that, I was such a fan of Judy Blume’s Fudge books and Beverly Cleary’s Ramona universe. I loved seeing those characters grow up and face new challenges every couple of years.

You and I are approximately the same age, and it seems like toys don’t resonate today like they did for us. Do you think that toys are less important to kids, or do you think that kids don’t utilize their imagination like we did when growing up?

I have a four year old and the toys he REALLY loves are the ones that don’t talk, don’t beep, don’t fire stuff, they’re just there, just like our toys, our old action figures, our dolls. The best toys are the ones that let you play. Action features, sound chips, they get old after a while, but a good action figure that you can build stories around, that will last you until you’re too old to play with toys. I had a GI Joe Shipwreck figure that was the lead in my action figure stories for years. He’d team up with Storm Shadow against Super Powers figures, Secret Wars, Transformers. If my action figure stories were movies, Shipwreck and Storm Shadow would have more episodes than Star Wars.

One of the aspects that I find so appealing is that Grumbolt is a homemade doll. Is it based on a doll you had growing up?

You know, I didn’t, but it felt correct for this story. In elementary school, no one knows what they are, or who they’re supposed to be. What better way to reflect that than with this badly sewn together mess of a doll who’s unsure of what kind of animal his creator was even going for? Every one of Grumbolt’s classmates comes in a box that says who they are, what they do, who their friends are. His best friend at school is so valuable she’s in a mylar bag all the time. Grumbolt was made quickly and then thrown away. He’s got a lot to overcome and a lot to figure out about himself.

How did you find artist Edwardian Taylor and what does he bring to the project?

Edwardian Taylor was suggested to me by my editor, Emily Siefe. The MOMENT I saw his stuff I fell in love. It felt so right. His stuff is so warm, and so dynamic, so smart and so beautiful to look at. Edwardian had to design like 80 toylines that before this book didn’t exist. That takes a lot of imagination, and Edwardian tackles it like it’s no problem whatsoever. Plus he’s just a great collaborator, and fun to talk to. I am so beyond lucky that he is my partner on this.

What were you favorite toys when you were a kid and what was the one toy that you always wanted but never received? 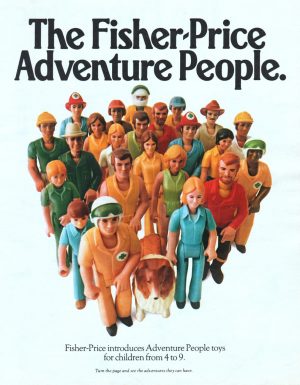 I loved Adventure People, who were basically nameless figures that didn’t have names, just “Daredevil Man” or “Robot Girl”. It let me come up with all sorts of stories for them.

I was crazy about Star Wars figures, loved Transformers and Secret Wars a lot. He-Man had an incredible run, so many great, weird characters. Super Powers were great. They were beautiful, perfect replicas of the characters. And then they started going into the supporting players like Red Tornado and Firestorm and Mister Miracle, oh, I loved them.

But the greatest toyline ever was GI Joe. So many great characters, Larry Hama was a genius. Snake Eyes, Storm Shadow, Shipwreck, Duke, Destro, man, there were hundreds of great characters. Plus the figures themselves were so poseable, great accessories, vehicles. Now I wanna go on eBay and find a few.

I always wanted GI Joe‘s Aircraft Carrier but I never got it. That’s for the best, we didn’t have room for it anyway.

Are you prepared if the book is a hit for your own line of Toy Academy toys?

That would be a dream come true. Holy cow. I remember when I went to a store and saw a character I created for the movie Hop had his own stuffed animal. I picked it up and my hand was shaking. It was a weird moment. Since then, writing Minions and co-writing The Secret Life of Pets, I’d been lucky enough to see lots of characters I created turned into toys. That said, Toy Academy actually getting toys would be a whole other level. I would love to have a Grumbolt. That was be incredible.

Toy Academy arrives in bookstores and e-tailers on January 30, 2018