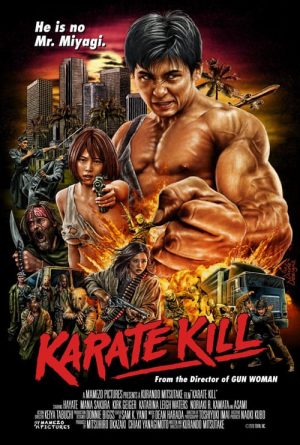 When Kenji, a highly trained master of karate, arrives in Los Angeles looking for his sister Mayumi, any obstacle that stands before him will be beaten into submission. After tracking down Mayumi’s place of employment, Kenji finds out that his sister has been kidnapped by a crazed cult calling themselves Capital Messiah who fund their efforts through online streaming snuff films.

Luckily, Kenji meets up with the mysterious Keiko and together they take on Capital Messiah’s leader Vendenski and his dangerous group of crazed followers.

Karate Kill is a fantastic mishmash of 70’s and 80’s action and the transgressive nature of the low budget Japanese straight to VHS action and pink films along with heavy doses of sleazy 70’s exploitation sprinkled throughout. When it comes to the great number of “grindhouse throwback” films (or “80’s VHS era throwback” it works as both) we’ve gotten over the last ten years, Karate Kill is a film that feels authentically as absurd, naïve, and sleazy as any 70’s drive in gem without having to resort to the story clichés and fake film filters that plague the sub-genre.

Director Kurando Mitsutake, whose 2014 film Gun Woman is also worth a look, has crafted a wonderfully riotous action exploitation romp. Karate Kill provides the viewer with a number of excellently choreographed fight scenes along with some fantastic gore effects sure to satisfy both the exploitation and horror crowds.

Karate Kill also features a great cast including newcomer Hayate as Kenji, an internationally recognized martial artist and parkour master. I believe that this is Hayate’s first starring role and expect to see him appear in a lot more movies. The film also stars Asami as the mysterious Keiko and fans of over the top Japanese cinema will certainly recognize her from starring roles in Gun Woman (2014) and Machine Girl (2008) among many others.

So my typing has rambled on enough here, if you are a fan of crazy action, martial arts, exploitation films then you absolutely must see Karate Kill immediately, then again with friends!