I’ve yet to reach the dizzy heights of E3 but that’s okay because I’ve attended multiple UK based conventions including Eurogamer. I’ll come and visit the states one day, I promise. However, there’s one particular gaming festival that takes place in the city where I live, it’s still relatively new, and ran from May 29th to June 3rd this year so I wanted to write about it. 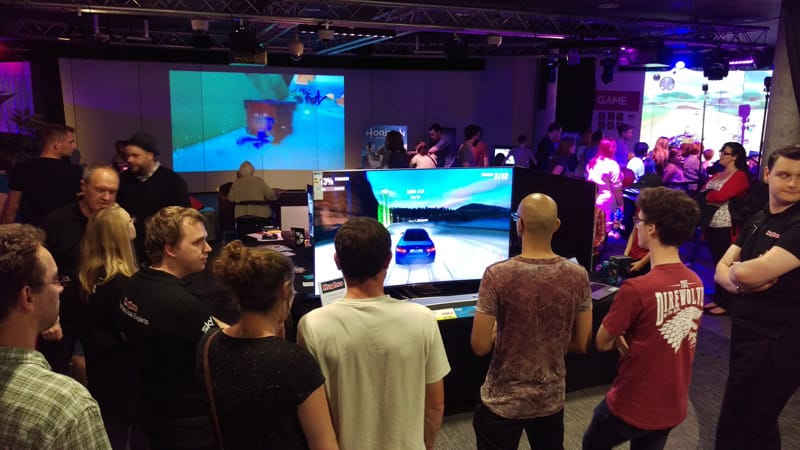 The Norwich Gaming Festival (NGF) has been running since 2014 and with every year has grown in size and notoriety. Norwich is no stranger to gaming events with Norwich Retro Arcade exhibiting at The Forum for many years, the growing interest eventually spawned the NGF with the help of the Norfolk Indie Game Developers group and of course Norwich Retro Arcade is still a big part of the event every year. 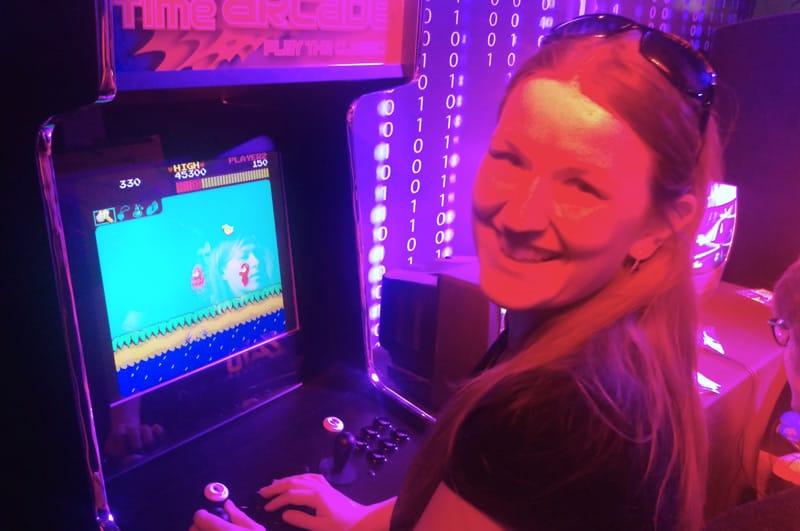 Last month One Life Left, a video game café who were also taking part in the Norwich Gaming Festival this year, opened it’s doors nearby offering drinks, snacks and a place to play games with your friends in the city. Multiple second-hand gaming stores have popped up in my city too, included one called Regenerating Gaming, its part of the East Anglia Nintendo Street Pass community and holds regular events and tournaments.

For those who want to get into the industry or learn about games, Norwich has that covered too. You can study Games Art and Design and Games Development courses at Norwich University of the Arts and a higher education institution, Access To Music have recently introduced a new division dedicated to games. Norwich University of the Arts is also one of only 12 worldwide partners in Sony’s PlayStation First Academic Development Programme.

It’s a stark contrast compared to when I first moved to Norwich in 2004 but I’m happy that it’s becoming such a creative hub for the gaming community. Norwich Gaming Festival is a big part of that and the best part? It’s currently free. 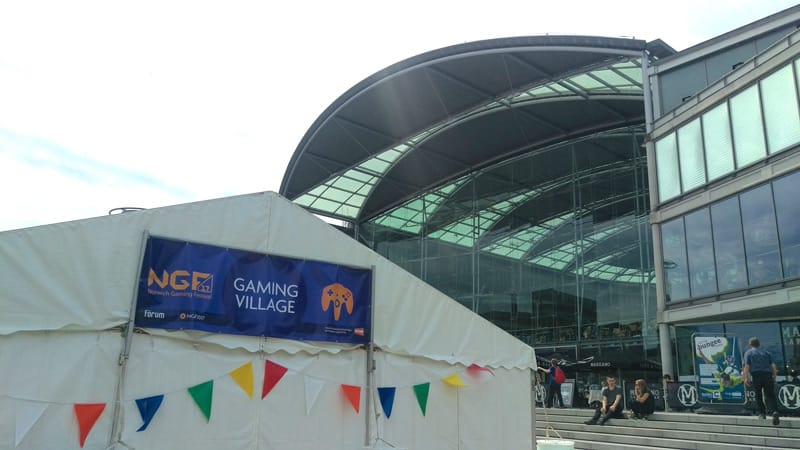 The festival itself included game demonstrations, new releases, career advice, the chance to play retro titles, design workshops, stalls, cosplay displays, a VR area and guest speakers in the industry. Well-known, Norwich based YouTubers DidYouKnowGaming? and Ashens were also in there alongside local podcasters The Super 8-Bit Power Hour. 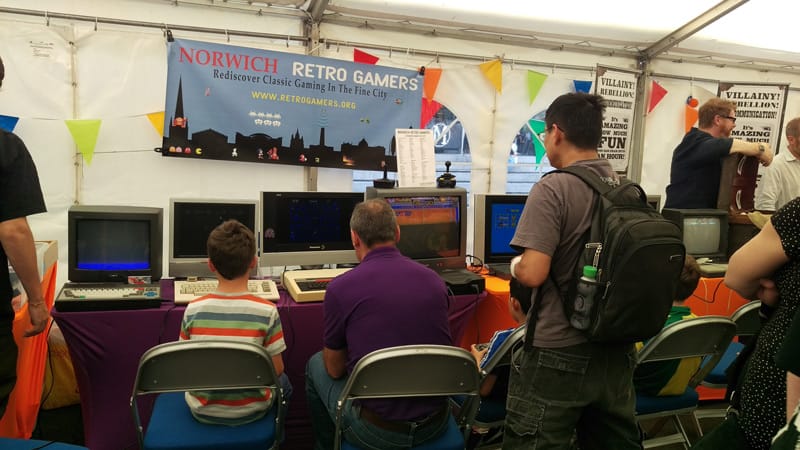 I spent some time enjoying the festival, chatting to exhibitors, resisting the urge to buy retro consoles and of course playing games.

Here are a few of my highlights: 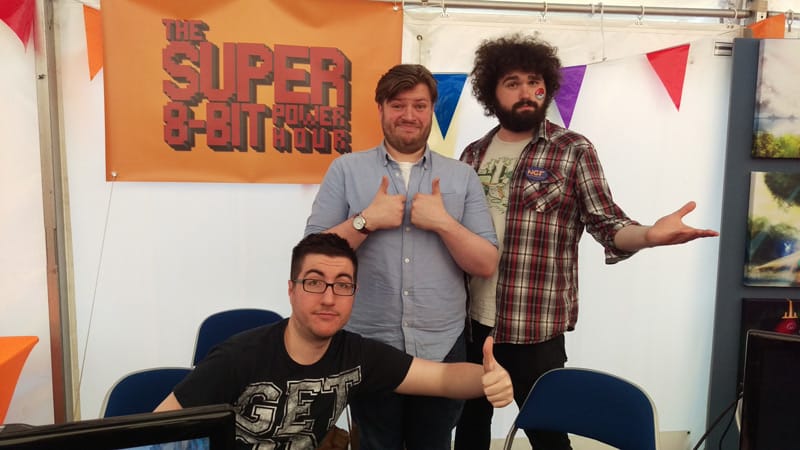 This Norwich based podcast is one that listen to regularly and I’ve even been a guest on it. They discuss games, films, comics and all things pop culture related. Ben Allen, Huw Churchman, Chelsea Taylor and Tom Garbutt were there representing the group, not to mention a cameo from Basil (Ben and Chelsea’s pug!).

The podcast is their main labour of love but they also have a Talking Over Movies series on YouTube as well as regular Let’s Plays called Powercade, where they play through retro titles, the first of which featured members Ben and Drew playing Virtua Fighter on a Japanese Sega Saturn. 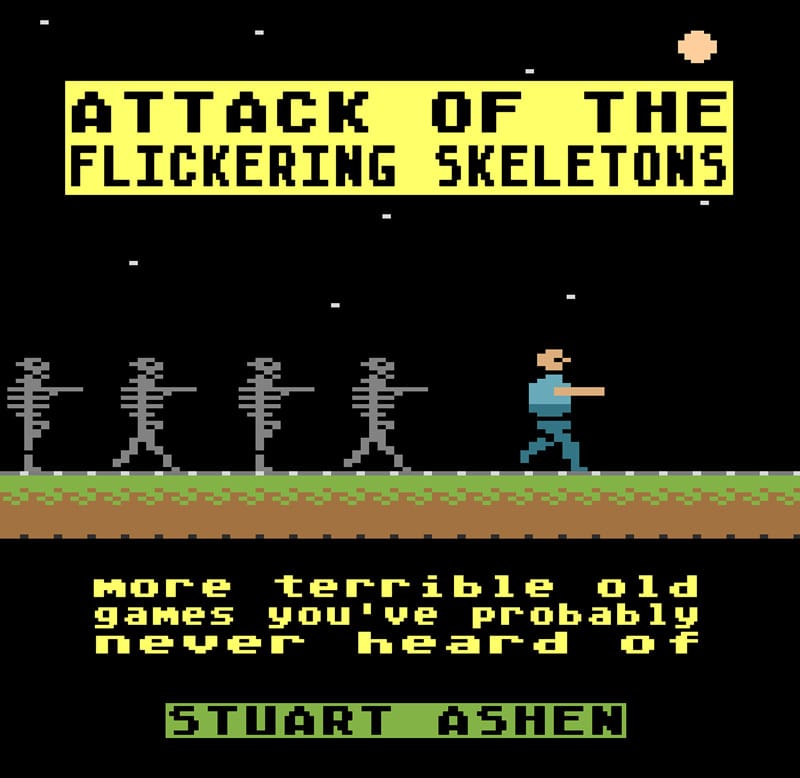 Stuart Ashen (Ashens) is a YouTuber with over 1 million subscribers, known for reviewing tat, old toys and pound shop items but he also released a fan-funded feature film in 2013 called Ashens and the Quest For The GameChild which featured Warwick Davis and Robert Llewellyn. A sequel is currently in pre-production.

If you don’t know this YouTube channel then prepare to be surprised because they have well over 2 million followers, making them one of the most subscribed to gaming trivia channels. Originally a blog dedicated to video game trivia, DidYouKnowGaming? create interesting and informative videos that regularly feature voiceover from other famous YouTubers such as JonTron and often do surprise me with things I didn’t know. 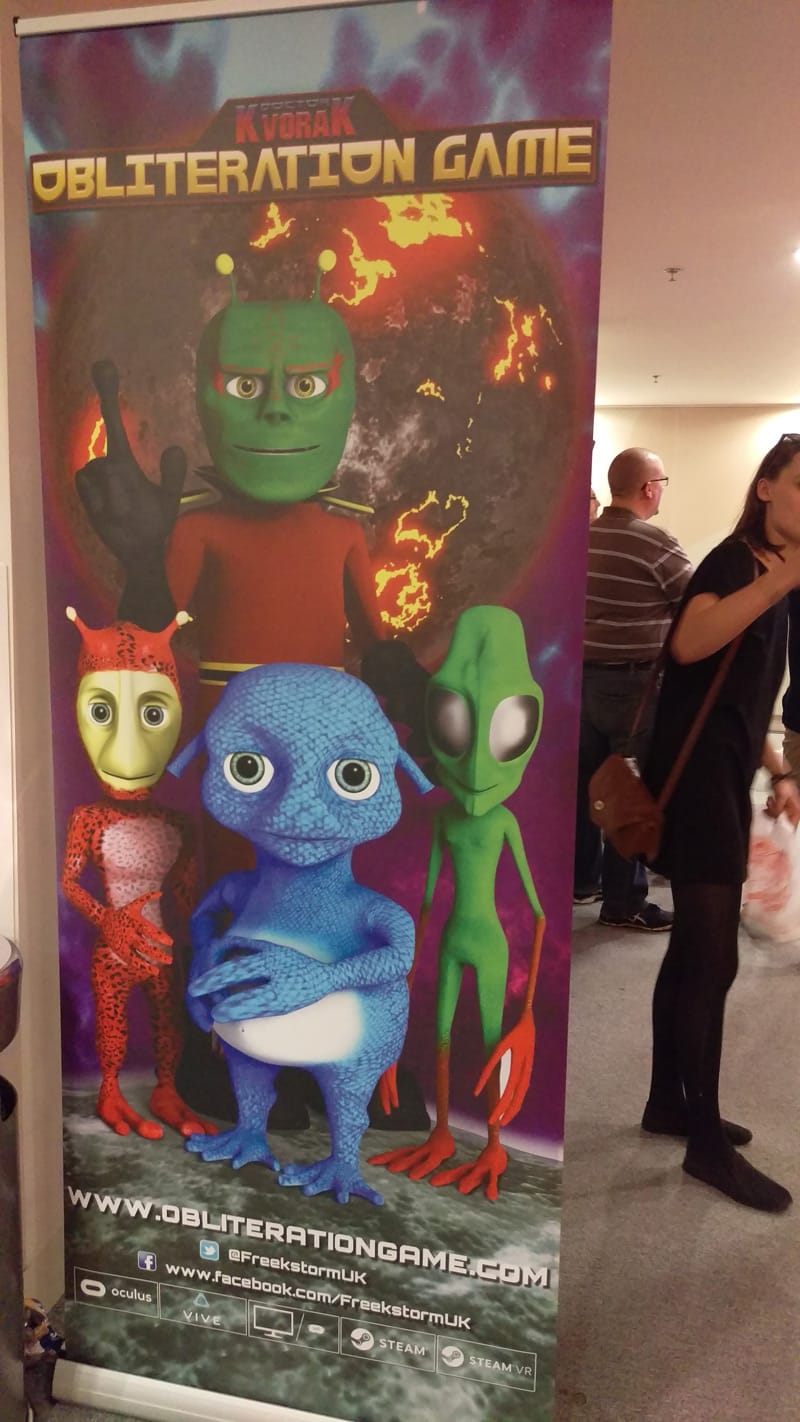 As I was checking out the VR zone, I came across a poster I recognised and was pleasantly surprised to discover that an indie games developer I had met at Eurogamer in 2013 had branched out in VR. I remember enjoying Doctor Kvorak, a fun 3D platformer puzzle game with catchy music and I was really pleased that Freekstorm Games appeared to be doing so well, they had a bit of a queue so I didn’t get the chance to catch up with them.

The game has been green lit on Steam and is compatible with the HTC Vive and Oculus Rift/Touch. To see indie developers still doing what they love years later was great and festivals and conventions like this that keep them going and continue to build interest.

I’m already looking forward to next year’s gaming festival and I fell really lucky to live in a city where gaming is taken seriously and is recognised by its residents. Luckily, I resisted the urge to spend all of my money on retro games! 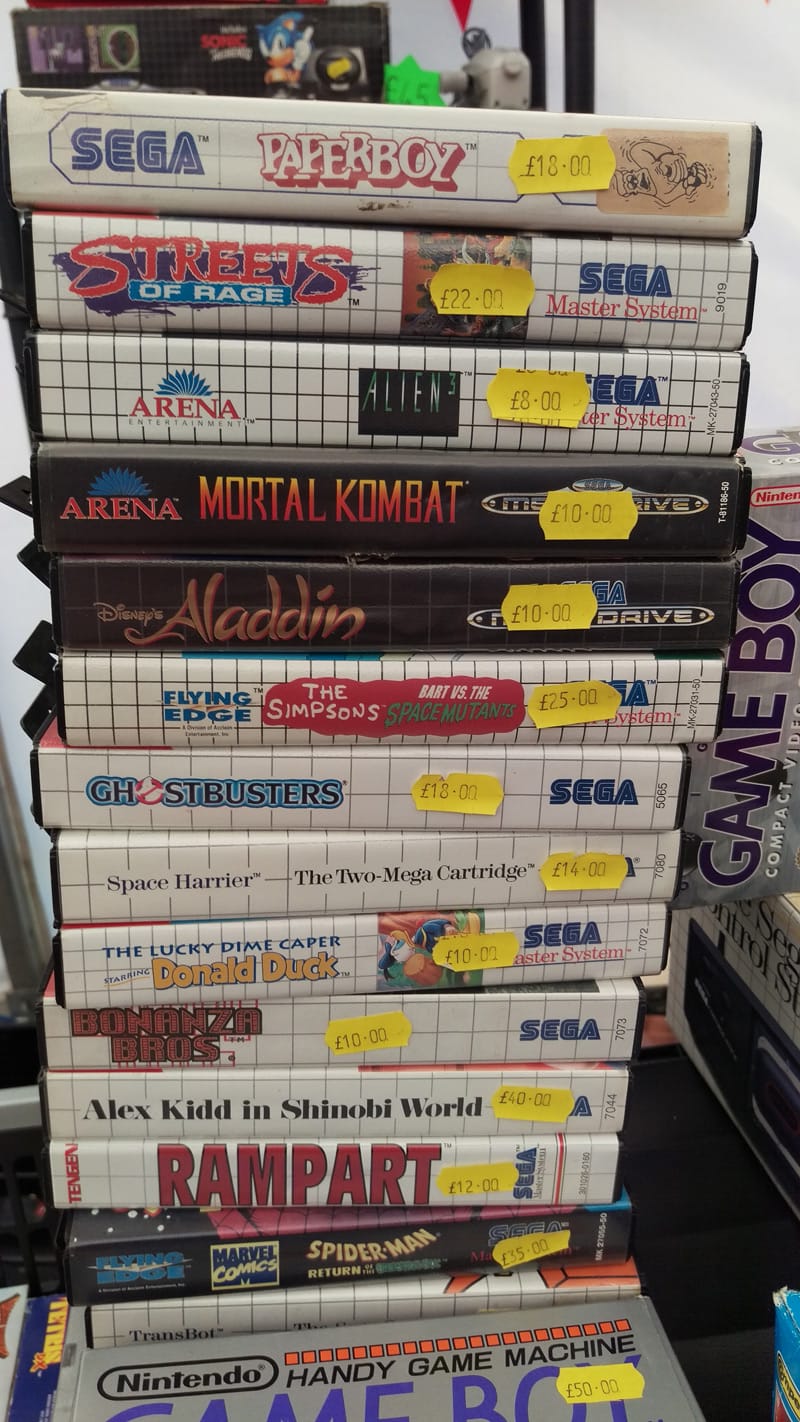 Why not check out if any local gaming events are happening in your area? I’ve listed a few that are happening in the next month that you might not know about. Be sure to let us know in the comments section if you know of any others. 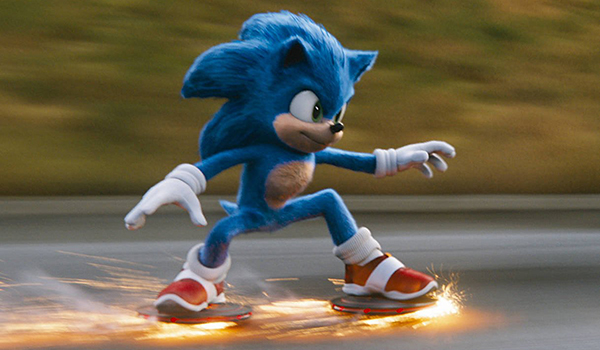