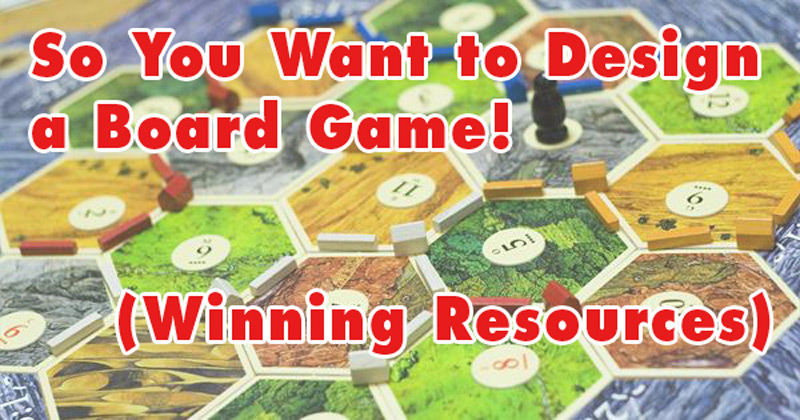 You’re sitting on an incredible idea for a best-selling board game. If only you had the know-how and the tools to make your idea a reality.

Well, where there is a will, there’s a way. And the good news is that the interwebs are just loaded with resources for aspiring board game designers.

I won’t lie. Creating a board game can be a daunting task. Marketing and selling it even moreso. I write a lot about great games that made it big, and I write about games that made it only so-so. Those are the rare successes. A lot of games either never get any sort of traction with the public, or never make it out of the designer’s imagination. There are a lot of pitfalls and a lot of things to learn.

I’ve highlighted a few very useful websites that may help make your board game dreams a board game reality. Take a look, and the best of luck to you!

This should be every aspiring game designer’s first stop. At a single website, new designer’s can get a glimpse at the size of the overall game designing community–not necessarily for a sense of competition, but for a sense of community and sharing of resources. This site is packed with forums with discussions that touch upon every facet of gaming and game development. There are also regularly updated blogs by and for designers, lists of game publishers, advice for making game prototypes, playtesting, and more.

It’s not a particularly flashy site, but that’s okay. You’re there to learn the ins and outs of game design and this is one of the best places to do so and certainly one of the best places to start. Be prepared to spend hours exploring this site. The Board Game Designers Forum has been around for around 15 years and has attracted over 12,000 members. That’s quite a community to join.

Check them out at www.BGDF.com

Producers of such well-received games such as Scythe and Viticulture, Stonemaier Games is a great resource for new game designers when it comes to learning about crowdfunding your project. Their site is incredibly community-minded and it reflects the company’s own passion for good games. They offer series of posts on how to run Kickstarter campaigns for game projects, interviews with game designers, news and information on sales and distribution, business advice and a lot more.

I really have to hand it to these folk. They aren’t looking at other game designers as competitors. They’re looking at them as colleagues. I’m very impressed with that. You should go visit them at StonemaierGames.com and see what good advice they have to offer.

I’d be remiss not to mention what is likely the most popular board game-related website on the internet… BoardGameGeek.com. Many readers will likely already be familiar with the site as it’s where one often goes to check out reviews of games both new and ancient, shop, preview, trade, and discuss. They cover just about every conceivable genre and type of game imaginable.

Unsurprisingly, it’s also a valuable resource for anyone looking to break into designing games.

In addition to reviews and rulesets and the like, they host a number of board game blogs–many of which are aimed at game design topics. Some discuss the development of building a game, step-by-step from the ground up. Others talk about finding such important things as playtesters, artists, markets, and the like.

My only real criticism is that the site is huge and it’s sometimes hard to find what you’re looking for. That said, there is a handy search function sitting right at the top of the main page. That’s where I would recommend starting your exploration. Go ahead and spend some time at BoardGameGeek.com.

Let’s say you’ve designed your game, playtested it, polished it a bit, and you’re ready to make either a prototype to pitch to game publishers, or even ready to take this directly to market yourself. What then?

That’s where The Game Crafter comes in. They’re essentially a Print-On-Demand service for games. What Lulu or Createspace has done for self-publishing, so The Game Crafter does for game designers.

They have a very easy to follow system for setting up and uploading your games to fit a variety of formats. It’s unhurried, and there’s little pressure to rush. You can adjust and tweak your files at will. From there, you can just use them for production or you can use them as a sales venue. You can order as few or as many copies as you’d like.

Overall quality reviews get a bit mixed. Most are positive, but acknowledge that it’s a Print-On-Demand setup and that comes with certain limitations. I’ve heard they do card games well, although small cards can be a little rough on the corners. Then there is the pricing which can be a little high. This should come as no surprise to anyone who has ever tried custom t-shirts or other items through sites like Zazzle or Cafe Press. On the plus side, it’s a lot easier using The Game Crafter to print prototypes than having to do that yourself. If your game is a hit, you could always seek out more professional printing later.

That’s not to say that there aren’t other benefits. The Game Crafter also sell game pieces, dice, cards, baggies–so if you’re designing something more for personal use than commercial, this is a perfectly good place to get your supplies: TheGameCrafter.com

And because one of my columns wouldn’t seem complete without at least one YouTube link, I offer up this week a video to a discussion on Dice Tower in which the jolly frenemies count down their “Top 10 Tips for Game Designers”. What they mean is beginning game designers as their list takes aim at those who are most likely developing their own board games with no previous experience.

In a rare and surprisingly turn, the hosts of Dice Tower find themselves, for the most part, in total agreement regarding this particular Top 10 list. It makes for a more speedy and concise list that clocks in and just around 30 minutes.

Hey, What About RPGs?

Another topic for another time. While there is some definite crossover, creating, marketing, and selling content for tabletop RPG games is a whole other monster. Stay tuned, and we may get to this topic in time.

In the meantime, get gaming!

In this article:Art/Design, Board Games, Gaming Culture, Toys/Games