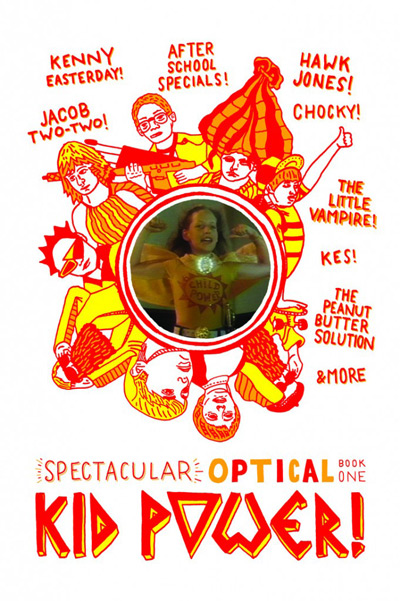 Child actors are normally the bane of any film.

You cringe at the terrible line delivery or the annoying antics of the kid in just about any movie, especially when it’s a kids movie.

For some reason kids movies are made with the intention not of connecting with children of the same age but for the express purpose of showing how little the adults making the picture know about children.

This is a book about child actors… but not child actors in that Diff’rent Strokes kind of way, but rather an examination of a time when children in film and television were asked to carry the weight normally of their elders.

There was a time when movies and television made for kids did not talk down to those very same children; When an After School Special was not a joke.

There was a time when a child in a film could be the linchpin to it working; When films aimed at children did not exemplify the worst aspects of children for a cheap laugh or groan.

KID POWER! (Spectacular Optical Book One) is a collection of essays about a number of these children’s films which highlight rather than exploit the fact that a child is the main focus of the story. These range from creepy kids to whiz kids to normal kids stuck in abnormal situations. The point is kids in films were once used properly and that seems to be a lost art.

This being a collection the authors all bring a personal and varied perspective to the proceedings.

The list of future stars to get their first job on the ABC After School Special is staggering. I won’t list them here because it boggles the mind how many modern superstars started their careers with what in the internet age are considered preachy jokes of television films.

The book herein also features a few interviews and insights from some of the people responsible for the works so cherished by the authors. These interviews shed some real light on pieces of pop culture history that may otherwise remain footnotes if not for the love this book pushes forth.

If you grew up in the 70’s or 80’s and remember a time when hearing the term “kids movie” was not a negative then you will enjoy this book.