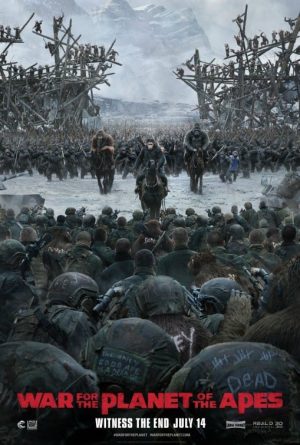 When Rupert Wyatt’s Rise of The Planet of The Apes was released in 2011, it not only served as a fantastic prequel to the long running franchise, but also reinvigorated it, utilizing state of the art motion capture computer special effects.

Part of the problem is the technology itself.  Whereas Rise ultimately focused on the human characters, and Dawn successfully looked at a world changed by the virus that gave the apes their intelligence, War feels both overlong and underdeveloped

The inimitable Andy Serkis reprises his role for a third time as ape leader Caesar, who struggles to find a way for the apes to peacefully live alongside the threatened human population.  This time out, the villain is The Colonel, leader of a rogue human military unit played with great effect by Woody Harrelson.  Also introduced in this chapter is mute girl, Nova played by Amiah Miller (and who’s character reappears in two of the original films played by Linda Harrison) and Steve Zahn as Bad Ape (who proves that he’s one of cinema’s most annoying character actors regardless of species).

Inherently, I found three major problems with the film.  First, it’s far too long.  At 140 minutes, the film struggles to keep the action moving.  And there’s a good reason for that.

Finally, far too often I felt like I was watching an animated film.  With the exception of a few human characters, and despite the use of motion capture, I far too often felt little attachment or worse, interest in the world presented.  There’s no real emotional weight.  Just lots of pixels working really, really hard.

And there’s the rub.  Far too often we’re now seeing films literally constructed piece by piece in a computer.  From environments to clothing to even the most smallest minutia of details.  Who is responsible?  The director?  The effects guys filling out the green screen on a computer?

It’s been said that, “a million monkeys at a million keyboards could produce the complete works of Shakespeare.”  How many will it take to make a summer tentpole?

In this article:Movie Review, Movies/DVD, Planet of The Apes, Sequels