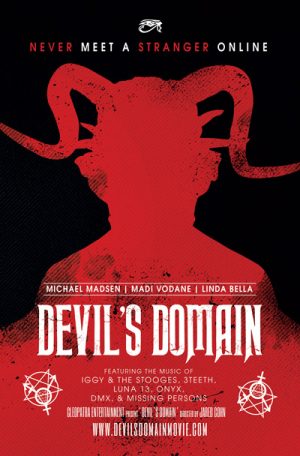 Ok, let’s just get right to this…

The IMDB plot synopses for Devil’s Domain is as simple and as straight forward as this movie should have been, “After becoming the victim of vicious cyber bullies, Lisa makes a deal with the devil to exact revenge on her tormenters.”

I mean, yeah, it’s well trod ground to write a story about a deal with the devil gone wrong, but with the added topic of bullying one thinks that even a no budget movie could pull together a strong story with a dramatic hook.

But unfortunately, Devil’s Domain does no such thing; actually it takes its good ideas along with the cast and wastes them amidst a mess of poorly written character interactions, nonexistent motivations, and sloppily integrated effects set pieces.

To break this down a little more let’s examine that plot synopsis again. There seems to be no real motivation for the bullying and every other teen character in the story appears to act so openly hateful toward Lisa that someone certainly would have intervened in an attempt to figure out what was actually happening.

Now on to the part about Lisa making a deal with the Devil for this “revenge on her tormentors” bit, then please explain to me why the devil character starts killing these people prior to meeting with Lisa? Actually even prior to the cyber-bullying instance? That isn’t only a flaw of the plot synopsis but of the storytelling as a whole. Not to mention the fact that absolutely no one seems to notice that people are being killed, even when they are killed at populated parties with all their friends nearby.

Unfortunately Devil’s Domain is an uneven jumble of scenes that seem to have been placed out of continuity without care. Sloppy writing, sloppy execution, and even sloppier editing make for a rather inept and frustrating viewing experience.

In an attempt to be fair though I will say that the cast does the best with the material they have, especially Michael Madsen and newcomer Madi Vodane as Lisa and since Cleopatra Films produced the film it does have a lot of good music provided by Cleopatra Records.

So to sum this rant up, you can skip Devil’s Domain.

Devil’s Domain is now available on Blu-ray and On Demand.