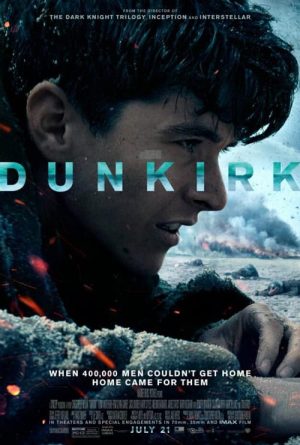 Christopher Nolan’s latest film is a visually engaging fight for survival from its opening frame until its last, but ultimately fails to resonate emotionally.

During the beginning stages of World War II, 400,000 Allied troops found themselves stranded on the beaches of Dunkirk, France surrounded by the German Army facing certain annihilation. Unwilling to surrender and with the waters too shallow to allow bigger naval vessels to approach, the British call upon its civilian boat owners to help bring the soldiers home.

26 miles never felt so far away.

Nolan structures the action by breaking it down into three parts that play out over the course of three different time frames.

Land (One Week): the allies waiting to be evacuated, mainly following young British soldier Tommy (Fionn Whitehead) who’s willing to do anything to get off the beach and escape the impending doom.

Sea (One Day): civilian boat owner Mr. Dawson (Mark Rylance) who, along with his son and his son’s friend, honorably answers the call to make the perilous journey across the Channel.

And lastly, Air (One Hour): Royal Air Force pilot Farrier (Tom Hardy) and his wingman Collins (Jack Lowden) trying desperately to protect the ships aiding in the evacuation while dealing with their own restrictive fuel limits.

The film is at its best when the three storylines finally converge in the last twenty minutes or so.
But aside from a few moments of overlap in the early-goings that don’t have much impact, you could easily remove the time tags and the audience would be none-the-wiser. And while it’s by no means a blow to the film, it’s a choice that doesn’t necessarily pay dividends and sometimes lends an air of wonkiness to the whole affair.

These more intimate portraits of courage, honor, and survival, help focus our attention on the smaller details. From a young soldier refusing to go below deck on a hospital ship knowing damn well they could be torpedoed or bombed at any moment and doesn’t want to be trapped. Or a pilot losing his fuel gauge and having to rely on his wingman calling out fuel expediture at intervals so he can note the time and keep track of it. Only to eventually lose his wingman.

While it’s the little moments that truly shine in Dunkirk, the characters fall flat. The talented cast (yes, that includes Harry Styles) breathe as much life into their personas as possible, but we never truly get to know any of them, making it hard to be invested in their fate. Essentially sapping the emotional core from the film. That doesn’t mean you won’t shed a tear or two. There are genuine moments of triumph and raw emotion you can’t help but react to, but they’re fleeting.

Overall, Dunkirk is a beautifully shot film that demands to be seen on the big screen. It’s unrelenting from start to finish in the best way possible. My biggest complaint is I wish it was longer (and that Interstellar was shorter). Because even though it didn’t fully come together for me, I could easily watch another hour of it.